NEPAL: Prime Ministers and the economy

Here is a snapshot of how the economy (related one here as well) fared during various prime ministers since 1990/91 in Nepal. The highest GDP growth rate was 7.9 percent in 1993/94. Fiscal deficit widened the most in 2008/09, which shows how much Nepal is unable to match rising expenditure with revenue. FDI committed by authorized firms at DoI was the highest in 2010/11 (annual FDI growth rate was the highest in 1992/93). Initially due to conflict and now due to lack of job opportunities (new investors are reluctant to come and existing ones are perishing due to labor problems, high cost of production resulting from inadequate supply of electricity and supply-side constraints), the number of migrants is increasing.

The soaring expenditure and the inability to match it up with revenue (see widening fiscal deficit) is resulting in a situation where the economy is increasingly reliant on foreign aid to fund most of its reform programs and development works. Inflation was the highest in 1991/92 (due to the turmoil in the Gulf then and its impact on oil prices, the shock the economy got following economic blockade by India in 1989, and sudden change in economic structure following liberalization in 1992).

Based on the figures seen here, make you own judgment regarding which leader/party delivered growth and prosperity to the Nepali people. 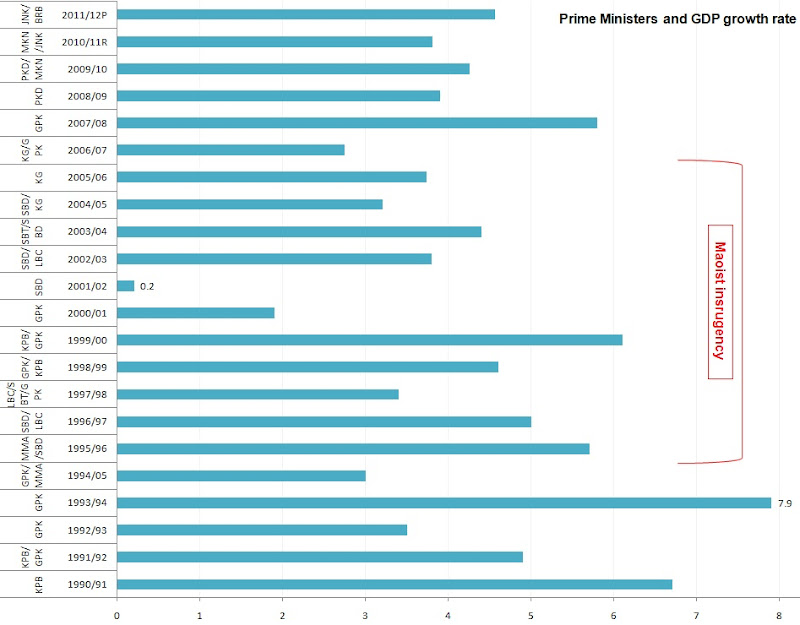 Posted by Chandan Sapkota at 1:11 PM No comments: