No value of paper money in Zimbabwe

So the Reserve Bank of Zimbabwe has introduced ZW$50 billion note. The hyper inflation has collapsed the economy and it is reported that this new note is enough to purchase just two loaves of bread. This week the exchange rate was US$ 1= ZW$25 billion.

Hyperinflation in Zimbabwe at present is estimated to be at 231 million percent. Unless the whole economy (and hopefully Mugabe and his juntas) collapse, it will be hard to revive the economy using the same currency, whose cost of printing is slightly lower than the true worth of note. A classis case of economic and political mismanagement, indeed! On top of this, the country is facing Cholera outbreak, whose cause Mugabe blames on the West.

Meanwhile, a note from Zimbabwe:

It is just after midnight in Harare. I have just returned from a midnight tour of the ATMs in Harare with a cousin. There are queues of people still waiting to get their weekly cash withdrawal limit of $100,000,000,000 (US$2.50). I saw the queues this morning when I went for my first meeting at 7.45am. I did not know then that I would be seeing them throughout the day. Most of the ATMs had run out of money. Rather than go home, people saved their precious place in the lines by lying down where they stood and taking a nap. Covering themselves with sacks, newspapers and whatever warming clothing they had. Those ATMs that were still paying out cash had queues of policemen and soldiers… 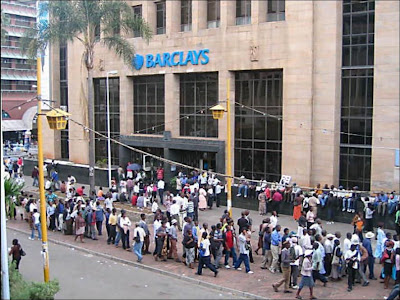 …There was a power outage from 6 p.m. and it had taken us two hours to find a house I last visited 20 years ago as a boy. But I did ask how she was coping in Harare; and to her nephew she poured her heart out. No clean water for weeks on end, no food in the shops and constant power cuts. She drives an hour and half across the township in search of clean drinking water, which she brings back in plastic containers. When the city council water does run through the taps in the house, the water is discolored with sewer water. The shops in the neighborhood are empty of basic necessities including mealie meal.

…With civil service wages eroded by hyperinflation, people necessarily spend more time in the parallel economy trying to make ends meet. Interestingly, there are no runs on banks. The value of the withdrawals is so meaningless that the banks will be able to meet depositor demands with ease.

Posted by Chandan Sapkota at 6:02 AM No comments: