There is an ongoing debate on whether the most widely used $1.25 per day (PPP 2005) poverty line truly reflects the cost of basic needs. There are other measures of poverty such as the Multidimensional Poverty Index and the national poverty line.

Anyway, the point here is to show the percentage of population living below the various poverty lines, and let folks make their own judgment about the adequacy of this to cover the cost of basic needs. 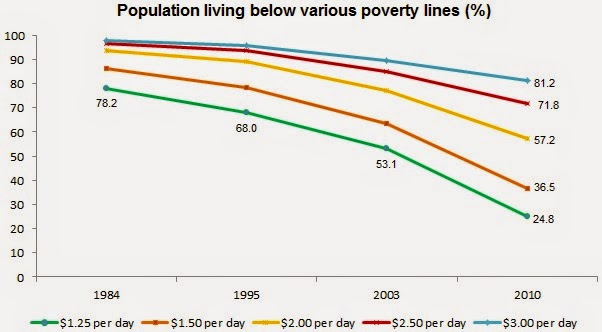 Here I have used five poverty lines (all PPP 2005 $) and the corresponding poverty percentage in 2010/11 is given below:
The striking thing about this is that despite the remarkable progress in absolute poverty reduction, as measured by $1.25 a day, (thanks mainly to remittances, agricultural wages, urbanization and improved access to social services), almost 60% of the folks are living below $2 a day poverty line. Alternatively, most folks are earning between $1.25 a day and $2.00 a day. It implies a high probability (and subdued/latent vulnerability) of sliding below the absolute poverty line in case of income shock such as the disruption in remittance inflows. To reduce the vulnerability, per capita income growth and jobs have to be driven by high and sustainable GDP growth, which could be achieved by investing in critical infrastructures (energy, transport, irrigation, ICT, etc). Else, the dent in poverty reduction is not going to be deep and wide enough. 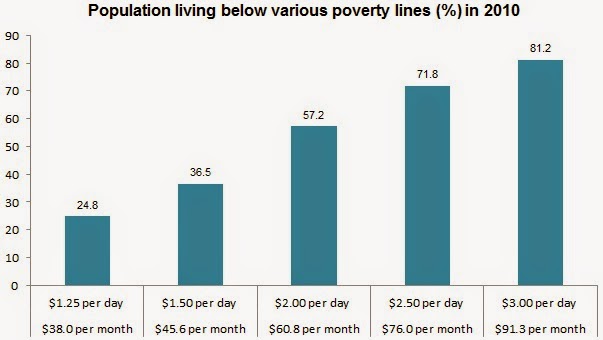 Interested folks can compute here the percentage of population living below various poverty lines . In order to get the monthly poverty line, multiple the poverty figure a day by 365 and divide it by 12. Here I have used the monthly poverty line with one decimal point. You might get slightly different figures if the decimal points are larger. Anyway, it won’t make much difference.
Posted by Chandan Sapkota at 10:29 PM No comments: