How far to go with government intervention?

Here is an article about how to better utilize government involvement rather than clamoring for less government. Why? Because there is no evidence that higher taxes and bigger government spending on welfare slows down GDP growth rate. Compare the Nordic countries with the more liberal ones like the US!

...Contrary to the romantic claims about the nation's laissez-faire past, American history is a story of government intervening, time and again, to support growth.

...Rather than harm the economy, the evidence shows that government spending, when done well, contributes critically to economic growth. Americans rely on the government for the free primary and high schools that educate the workforce. The government subsidizes college education and has built the immense transportation infrastructure that moves goods across the country and gets people to work. Federal, state, and local government have been essential to the nation's health, building clean-water systems and developing vaccines that have eliminated or minimized diseases like diphtheria, tuberculosis, and polio. The government can waste money, too. But the national rhetoric about the economy needs to stop focusing on how to shrink the government, and start focusing on how best to use it.

...In 1992, President Bill Clinton succeeded in passing legislation to raise the income tax rate on higher income Americans. Harvard's Feldstein, who had served as Reagan's chief economic adviser, claimed that the tax increase would reduce the incentives to work and therefore the incomes of the wealthy. It turned out to do nothing of the kind: the top tier of Americans, in fact, made more money.

A look at tax history suggests that this should have been no surprise. Nancy L. Stokey, of the University of Chicago, and Sergio Rebelo, of Northwestern University, looked closely at the period between 1913 - when the United States first adopted an income tax - and 1942. In that period, the federal bite from income taxes rose from 2 to 15 percent of GDP. Discounting the data for business cycles, including the sharp downturns during the Great Depression, they found that the rate of growth remained consistently strong and positive over the years, despite ever-higher tax rates.

Posted by Chandan Sapkota at 10:08 AM No comments:

Sinan Koont, Professor of Economics in Dickinson College, in a paper about Cuban urban agriculture, terms the urban agricultural movement in Cuba "'a success story." (This reminds me of a similarly titled and very popular research paper by Acemoglu, Johnson, and Robinson: An African Success Story: Botswana ). While AJR's paper was about how strong institutions of property rights and complementary political leadership contributed Botswana to enjoy more than 7% GDP growth rate for more than three decades, Koont's paper is about how the Cuban government (something like the planners), alarmed by cut in aid by the Soviet Union during the 1990s for "industrial" agriculture development, spearheaded a program called "organoponicos" to increase agriculture productivity, mainly "agro-ecological" or "organic"  in urban areas.

This carefully planned policy, according to Koont's paper, led to roughly one-thousand fold increase in production: 4,000 tonnes to 4.2 million tonnes between 1994 and 2005 (annual growth rate of about 78 percent). Well, based on this increase in output, this exercise is termed as a "success story." It could be entirely possible that the increase in output was a result of farming in the usual idle land, which the government has complete control over. I would consider it a success story if productivity increases by multiple folds for more than a decade or so and the contribution from increase in productivity of factors of production is higher than that from increase in farming land (i.e. area). Also, most of the production boom occurred in vegetable and fresh condiment production, not in general staple food crops, multiple fold increase in productivity and production of which would have been an actual success story to celebrate on. Nevertheless, the achievements as of now is in fact awesome and could be modeled in crowded cities somewhere else, if possible.

In fact, it seems that increase in outcome was partially a result of land redistribution by the government:

However, Koont also provides statistics of increase in yields per square meter:

...This kind of growth obviously implies an extensive increase in the surface area being cultivated but yields per square meter also went up impressively (in organoponicos, for example, from 1.5 kg/square meter in 1994 to 25.8 kg/square meter in 2001: a seventeen-fold increase). 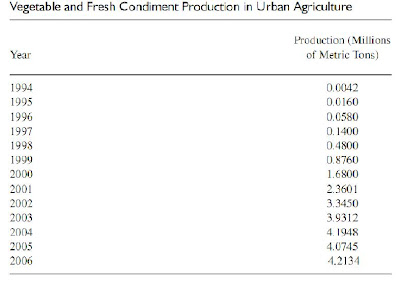 Success behind the achievement:

...The most important principle underlying this spectacular success is organizational: strong, disciplined, coherent central direction and guidance are combined with decentralized action in input provision, marketing, and production.

How far this model differs from the Chinese land reform of 1970-80, which led to successful programs like household responsibility system and TVEs, leading to increase in productivity and spectacular economic growth for over three decades?

The author argues that four main policy responses from the part of the state played a critical role in the urban agriculture revolution: research and development, training and education, provisioning of inputs, and material and moral incentives.

One of the interesting arguments on the paper is that institutional reforms might not become a hit even if they are meticulously designed- it requires well-founded movement on the direction of institutional reform so that expectations are matched with reality and new policy reforms. If reforms are formulated without heeding underlying dynamics of the situation in concern, then however grand a policy may be, it won't produce expected results. Easterly, in his book The White Man's Burden, argues that movement towards individual farming was well underway in some provinces in China before the implementation of household responsibility system. The communist leaders learnt that farmers have more incentives to increase productivity when they practice individual farming. The Chinese reform post-1978 basically institutionalized this movement, leading to its success.

Koont also argues that preparation for this institutional reform was well underway before it became a policy.

The basic ingredients of such success were (and are) already present in Cuba: an educated population; a socially concerned and committed, people-oriented central government giving support and organizational backbone to the effort; and ample stimulation of decentralized initiative and decision making by producers at the base, encouraging the finding of local solutions to local problems.

Regarding institutions, reforms, and behavior of agents, Carolyn Lesorgol, in her new book Contesting the Commons: Privatizing Pastoral Lands in Kenya, also argues that for a reform program like privatization of pastoral lands to be successful, people for whom the program is being targeted need to participate to strengthen feedback mechanism, and power struggle between nay-sayers and yes-sayers should be expected. Yes-sayers may win the struggle not because the reform program is grand but because the ability to change in line with the reform program comes from the participating people itself (through a gradual process, often influenced by education and social interactions). This is an interesting book about the dynamics involved in institutions and in agent's behavior regarding privatization of pastoral lands in Kenya!

Anyway, this is a good, short paper on a topic we rarely hear about! Here is a piece about food security in Cuba by Koont.