How globally connected is Nepal? 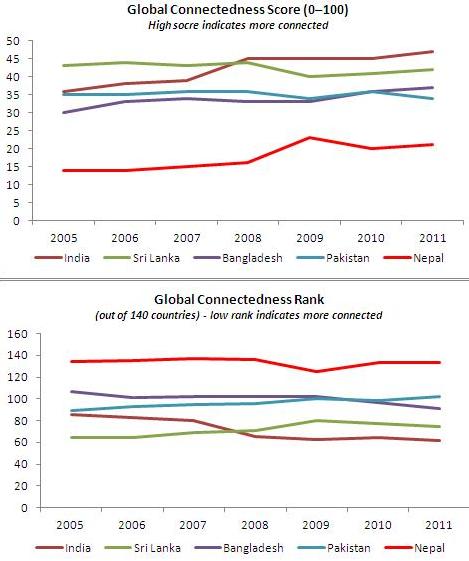 The report notes that Nepal has higher breadth (98th) than depth (137th). Among Nepal’s component level depth ranks, its highest is on outbound international students (41st) and its lowest is on merchandise exports (140th). Over half of Nepal’s merchandise exports goes to India and has a trade pillar ranking of 136 out of 140 countries (also read the changing narrative of the state of Nepal’s globalization).

Depth measures how much of a country’s activities or flows are international versus domestic by comparing the size  of its international flows with relevant measures of its domestic economy (usually as a share of GDP). Breadth complements depth by looking at how broadly the international component of a given type of activity is distributed across countries (usually diversification of sources for the scores in the pillars).

They are based on scores in four pillars, namely trade, capital, information and people. The depth dimension provides Nepal’s outward and inward depth scores and ranks at the component and pillar levels. Using the same pillars as in depth, the breadth dimension considers the intra-regional share of each Nepal’s flows. The components of trade are merchandise trade (% of GDP), services trade (% of GDP); capital components are FDI stock (% of GDP), FDI flows (% of GFCF), portfolio equity stock (% of GDP) and portfolio equity flows (% of GDP); information components are speed of internet bandwidth, cost of international phone calls, cost of printed publications trade; and people components are migration (% of population), tourists departure and arrival per capita, international students.

In the latest Global Information Technology Report 2012 as well Nepal ranked poorly at 128 out of 142 countries in terms of network readiness. Insufficient development of ICT infrastructure has limited its ability to leverage information and communications technologies to boost country competitiveness. It has stifled entrepreneurship and innovation.
Posted by Chandan Sapkota at 10:33 AM No comments: