Exchange rate of NRs vs IRs: Stay the Course

I co-authored my latest piece with Adnan. It is about the issues surrounding balance of payments deficit and the pegged exchange rate between Nepali rupee (NRs) and Indian rupee (IRs). Looking at the options available to the Nepali central bank, neither revaluation is good nor devaluation is good. Given the dire state of the Nepali economy, sticking with the existing peg is the best option. Here is an additional blog post on the issue.
------------------------------------------
Exchange rate: Stay the course
ADNAN KUMMER and CHANDAN SAPKOTA
There are rumors about potential change in exchange rate of Nepali rupee (NRs) with Indian rupee (IRs), with which Nepal has pegged its currency at a rate of NRs 1.60 equal to IRs 1.00 since 1993. While some analysts are wondering why Nepal’s currency cannot be changed, or appropriately revalued, others are calling for devaluation at the rate of NRs 2.00 equal to IRs 1.00. Some people say that change in exchange rate is essential because the existing peg set almost two decades ago does not reflect changing trading environment and widening productivity gap undergone by these economies. Others point out a little more convincing situation relating to soaring trade deficit with India and the need to contain it.
The rumors about possible change in exchange rate picked up much steam since the economy experienced approximately Rs 20 billion hole in the balance of payments (BOP) in the first half of this fiscal year. To douse potential speculative attack on the currency, the finance secretary and the finance minister had to put out statements saying that exchange rate will not change as of now. Even the central bank is being pressured to come up with a formal statement. Given the state of our economy right now, staying the course, i.e. sticking with the existing exchange rate peg, seems to be the best option.
The most pressing macroeconomic problem right now is to find ways to narrow current account deficit and close the hole in BOP. The surge in imports and decline in remittances and exports have triggered this unfortunate situation. A revaluation of the currency is out of question because it would not address the core problems. In fact, it would widen current account deficit as imports from India become relatively cheaper to domestic consumers. Meanwhile, imports of Nepali items by Indian consumers would become expensive. It makes sense to revalue Nepali rupee against the Indian rupee if the demand of Nepali export items by Indian consumers is inelastic, i.e. no matter by how much prices change, Indian consumers would demand Nepali items. This is clearly not the case. In fact, the Indian market already has close substitutes of almost all the items Nepal exports.
Devaluation seems to be the most favored option among analysts of the Nepali economy. At present, it is definitely a better case than revaluation but a weaker case than status quo. There are short-term gains and long-term dangers associated with devaluation. Devaluation – a deliberate downward adjustment in the official exchange rate – will reduce the currency’s value. By making exports less expensive, and discouraging imports, devaluation can indeed help reduce current account deficit. If things turn out this way, then devaluation is not bad for the Nepali economy.
However, once the monetary and trade engines set in motion, it does not stop there; devaluation is not devoid of dire economic consequences. First, by increasing the price of imports and stimulating demand for exports, devaluation potentially increases economic activity but aggravates inflation. But, high inflation rate will force government to raise interest rates to control spiraling price rises, which is already hovering around 12 percent in Nepal.
As a consequence, the higher interest rates will cause a slower rate of economic growth by discouraging consumption and reducing investment by firms. Moreover, once the inflation genie is out of the bottle, we will have to let go a lot of economic growth before inflation can be contained again. The story of inflation is a little more complicated than what some are arguing simply that devaluation will result in a short-term high-inflation, but a long-run low-inflation. Economists and policymakers would have a simpler life if it was this straight-forward. 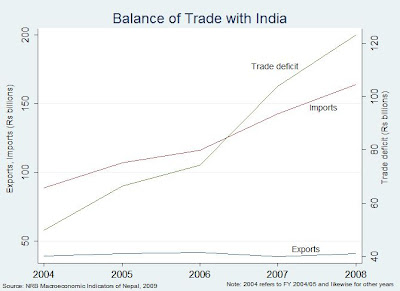 It makes sense to revalue Nepali rupee against the Indian rupee if the demand of Nepali export items by Indian consumers is inelastic, i.e. no matter by how much prices change, Indian consumers would demand Nepali items. This is clearly not the case.
There are a number of factors that affect inflation. We need to figure out what will be the greater source of inflation after devaluation: Demand-pull or cost-push inflation. Given such a high rate of unemployment and excess capacity in the economy, it is unlikely that inflation will come from the demand side. Moreover, if the demand is relatively inelastic in the export sector—which seems to be the case if we look at the level of exports to India in the past several years—the increase in volume of exports will be rather small. Instead, a greater fall will occur in the total value of exports. This avails no effective solution in addressing the pressing macroeconomic challenge.
A greater likelihood is that more inflation will creep into the economy from the supply side, both imported and domestic. Though it has changed a little bit recent years, historically, inflation in Nepali economy has followed the inflation pattern in the Indian economy. The increase in the price of imported goods and domestic supply constraints—both production-related and nonproduction related—will cause cost-push inflation. Note that Nepal imports almost 60 percent of total imports from India. According to NRB, the wholesale price inflation increased by almost 19 percent compared to 10.1 percent a year ago. Moreover, the exporting firms, for their part, now will have less incentive to cut their costs as devaluation will make their products more competitive in the export sector. Hence, in the long-run, both costs and inflation will increase. Inflation coming in from the supply side is sure to have long-term effects, and not just short-term. This will also undermine investor confidence in Nepal’s economy and diminish the ability to attract foreign investment.
With reserves to fund more than six months of imports, the central bank can comfortably sterilize pressure on the Nepali rupee. Generally, the IMF recommends reserves that can fund three months of imports. Right now, we are better off staying the course, i.e. no change in the exchange rate.
To address the current account deficit, which has deteriorated by around 245 percent in the first half of this fiscal year, Nepal should aim to “grow” itself out of this crisis rather than through currency manipulation. How? For the short term, one possible way is to make Nepal Tourism Year 2011 a success and generate substantial foreign exchange to ward off the pressure from surging imports and receding exports. Also, increasing price and quality competitiveness of Nepali goods will help increase exports. Meanwhile, increasing remittances inflow would provide a badly needed band aid to the economy.
The central bank has a very difficult task ahead. It has to rein in rumors about change in exchange rate, tame double-digit inflation, tighten liquidity in the real estate and ease in productive sectors, and effectively sterilize any pressure on the Nepali rupee. It has to take very cautious and pragmatic steps. In terms of NRs exchange rate with IRs, staying the course is the best option for now.
(Kummer is a graduate student at Johns Hopkins School of Advanced International Studies & Sapkota is a Junior Fellow at Carnegie Endowment for International Peace.)