There are more energy poor than income poor Indians, says this working paper by Khandkher, Barnes and Samad. About 57 percent of Indian rural households are energy poor as opposed to 22 percent income poor. Fuel wood is still the most popular traditional energy source in both rural and urban India. In urban India, electricity LPG gas is the most widely used modern energy source. In rural India, electricity is the most popular modern energy source.

“Energy poverty is a frequently used  term among energy specialists, but unfortunately the concept is rather loosely defined. Several existing approaches measure energy poverty by defining an energy poverty line as the minimum quantity of physical energy needed to perform basic tasks like cooking and lighting. This paper proposes an alternative measure that is based on energy demand. The energy poverty line is defined as the threshold point at which energy consumption begins to rise with increases in household income. This approach was applied to cross-sectional data from a comprehensive 2005 household survey representative of both urban and rural India. The findings suggest that in rural areas some 57 percent of households are energy poor, versus 22 percent that are income poor. For urban areas the energy poverty rate is 28 percent compared with 20 percent that are income poor. Policies to reduce energy poverty would include support for rural electrification, the promotion of more modern cooking fuels, and encouraging greater adoption of improved biomass stoves. A combination of these programs would play a significant role in reducing energy poverty in rural India.” 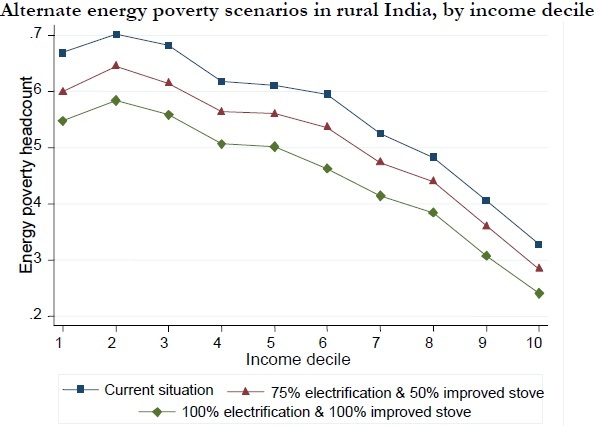 The estimation of energy poverty depends on the amount of energy consumed by the household, but not on the energy sources. But, for reducing energy poverty, it is also necessary to look at the sources of energy households are using. They look at this issues as well so that the right does of policy directives are formulated targeting the most needy ones. They propose policies for rural electrification, the promotion of more modern cooking fuels, and support for greater adoption of improved biomass stoves. See the impact of a combination of these policies, derived from simulation, in the chart. 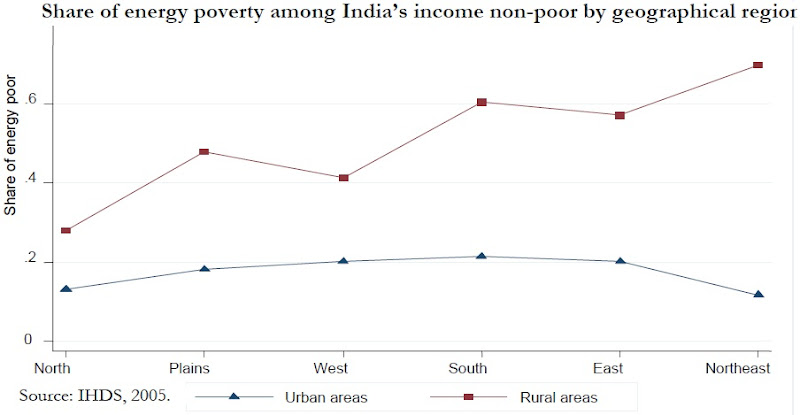 Posted by Chandan Sapkota at 10:25 AM No comments: