My latest piece is about the rising food prices in Nepal and what can be done about it. I tie up food security in Nepal with international trade (and to some extent with climate change). Nepal is a net food importer country since the domestic supply is insufficient to meet domestic demand. This production deficit is met by either imports or by food grains grant, especially via WFP. Here is an article on the same issue I wrote in 2009

Recently, the Food and Agriculture Organization’s (FAO) Food Price Index surpassed the upper bound reached during the peak of the food crisis in 2008. The World Bank says global food crisis has reached “dangerous levels”. In Nepal, the World Food Programme (WFP) argues that about 3.7 million people are at risk of food insecurity. Rising food prices have triggered a wave of protests across the globe and forced countries such as India, Russia and Vietnam, among other countries, to impose food grains embargo. These events directly or indirectly affect food prices and food availability in Nepal. Already, domestic food prices have reached second highest level since 1990.

As a net food importer nation, is Nepal prepared to deal with any further rise in food prices, production, and supply shocks at both domestic and global levels? The answer is uncertain, given the virtual absence of discussion about this issue at policymaking level. Meanwhile, the political leaders, who seem oblivious of the dangers of looming food crisis, are more worried about securing ministerial berths than ensuring enough food on plate for the poor, vulnerable and food insecure people. It is crucial for policymakers and selfish political leaders to realize that a further rise in food prices could not only affect economic growth and poverty, but also engender a series of protests and political instability.

Domestically, food prices are fast outstripping overall general prices. The Food Price Index (FPI) has been continuously dragging up Consumer Price Index (CPI), whose annual percentage change is a popular measure of inflation. Since Nepal does not produce enough food to satisfy domestic demand, it has to import food equal to domestic production deficit. So, shocks in production, supply and prices of agricultural goods at the global level affect food prices in our local markets as well. There was 316,000 metric tons food deficit in 2010, an increase by 139 percent from 2009, according to the WFP. In 2009, agricultural trade deficit was US$270 million, up from US$157 million in 2003. As the demand for food is fairly price inelastic, even if prices increase, Nepal will be importing at least the same amount of food, but it will have to spend substantially more, which will further widen total trade deficit. 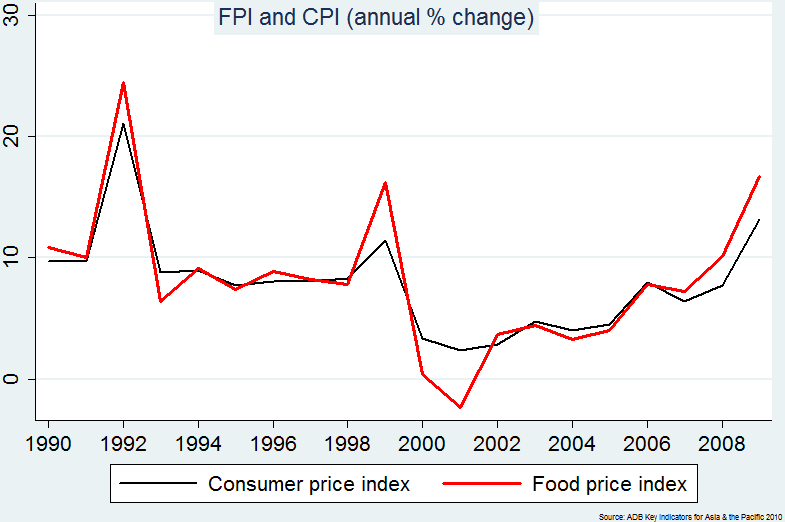 Globally, higher temperatures, shifting seasons, more frequent and extreme weather events, flooding, wildfire, and drought in Russia, Canada, Australia, Pakistan, China, Argentina, and Kazakhstan, among others countries have created production shocks. Meanwhile, supply shocks occur when major exporting nations take precautionary measures to curb exports or impose embargos on certain agricultural products so that their own domestic demand is met and prices remain below a threshold for their citizens. For instance, it recently happened when India, Russia and Vietnam, among other nations imposed food grains embargo. Additionally, speculation by brokers and investment firms, who bet on the future price of major agricultural items based on existing production, inventory, and future expected production level, have also contributed to price shocks.

All of these events have not only affected demand, supply, and prices of agricultural goods at the global level, but also, to some extent, in our own economy. Note that a Nepali spends, on average, 59 percent of his income on food. Of this about 58 percent and 15 percent are spent on breads and cereals, and fruits and vegetables, respectively. Since food prices are already high in the domestic market, any further price rise will force more people to scale back discretionary expenditures and savings, which will directly affect investment and economic growth.

What options do we have to mitigate the negative impact of rising food prices on the economy?

First, there should be higher investment geared towards increasing agricultural production and productivity so that domestic production deficit can at least be narrowed down. Meanwhile, domestic production of climate resilient varieties of food grains should be encouraged. Equally important are state subsidies on appropriate varieties of seeds and fertilizers, plus some sort of guarantee to facilitate transport of surplus production of each household to the market. The government and development agencies should provide sufficient infrastructure and policy structure to make this happen.

Second, to facilitate unhindered distribution of agricultural items in the market, carteling should be checked. The agricultural traders, who are mostly affiliated to one party or the other, purchase food items (especially veggies) from farmers at dirt cheap rates and sell them in the market with a wide margin. If prices start to come down, then they restrict supply to put upward pressure on prices. This sends deceptive, undervalued price signals to farmers, who are neither encouraged to produce more nor are motivated to seek innovative methods to produce improved varieties of food items crucial for food security and for putting downward pressure on prices. The supply-side bottlenecks have to be adequately addressed to not only encourage farmers to produce more and motivate them to seek innovative farming methods, but also to curb price manipulation and hoarding of agricultural goods.

Third, smooth regional agricultural trade is crucial to meet Nepal’s food demand. Since agricultural imports from India constitute over 40 percent of total agricultural goods imported by Nepal, it is in our interest to convince India—a net exporter of agricultural goods— to make an exception, or at least ensure a quota that is enough to meet our domestic needs, for food supply to Nepal even if it imposes ban on export to other countries. Since Nepalis and Indians consume pretty much the same kind of food items and the two countries share an open border with free flow of pretty much all goods and services, it is in both countries’ interest to smoothen trade. Else, the negative political and economic spillovers and black marketing will further haunt the regions on both sides of the border. Moreover, greater cooperation on agricultural trade among South Asian countries could also help to ease food deficit.

Fourth, a fully functional regional food bank is needed for emergency purposes. The 14th SAARC Summit held in New Delhi in 2007 agreed to establish SAARC Food Bank, which is expected to serve as a regional food security reserve for SAARC member countries during normal food shortages and emergencies. The food bank was authorized to start functioning with a total reserve of 0.24 million tons of food grains. Since this amount is not enough to ensure regional food security, Bangladesh recently proposed to raise the strategic reserve to 4 million tons. Sadly, the whole concept of SAARC Food Bank is yet to become functional. There is a need to address the issue of price incentive and access threshold to enable the release of grains from the reserve.

Fifth, and most importantly, it is high time political leaders, and officials at National Planning Commission, Ministry of Finance, Ministry of Agriculture & Cooperatives, and Ministry of Commerce & Supplies woke up and acknowledged the fact that rising food prices and a potential food crisis pose a real economic threat and could engender political instability. They have to plan and work in tandem to eschew a potential food crisis and its spillover on the economy and political front. Remember, in 2008 and early this year riots have broken hell loose and regimes have fallen around the world partly because of the hardship inflicted by rising food prices. We cannot discount similar fate in the Nepali economy if domestic food crisis spirals out of control.

Posted by Chandan Sapkota at 9:47 PM No comments: