[This blog post is adapted from Nepal’s Macroeconomic Update, August 2013, published by the ADB. Here is a previous blog post on real sector and fiscal sector.]

Although inflation (year-on-year average CPI) moderated to 8.3% in FY2012 from 9.6% in FY2011, it climbed to 9.9% in FY2013, higher than the 9.5% revised target set during the mid-term review of the FY2013 monetary policy. It consistently remained above 10% till mid-December 2012, declined to 9.8% in mid-January 2013, increased to double-digits for the two subsequent months, and then moderated during the last four months of FY2013. Overall, inflation remained higher in all the months of FY2013, except for the last two months, compared to the level in the corresponding months in FY2012 (Figure 1). The high prices reflected the low agriculture harvest, high prices in India, cost escalation due to the depreciation of Nepali rupee, upward adjustment of administered fuel prices[1], power shortages and persistent supply-side constraints. 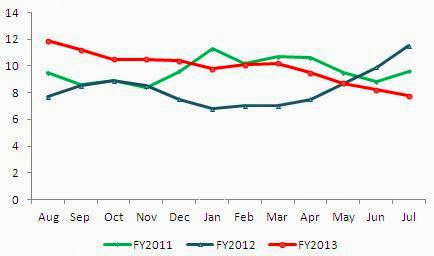 Overall, both food and non-food inflation rates increased in FY2013. While food and beverage prices increased by 9.7% from a rate of 7.7% in FY2012, non-food and services prices continued the increasing trend, reaching a rate of 10.1% in FY2013 from 9% in FY2012 and 5.4% in FY2011 (Table 1). The increased food prices reflects the low agriculture harvest, rise in transport cost transmitted to retail prices[2], and the higher import prices of agriculture products. Meanwhile, the high non-food and services prices, which has a 53.2% weight in the overall CPI index, reflects the price increase of imported goods due to higher external prices as well as the depreciation of the Nepali rupee. On the domestic side, persistent structural bottlenecks and supply-side constraints have contributed to keeping prices at a higher level. Structural bottlenecks include low quality human resources and deficient skills, weak backward and forward linkages, fragmented value chains, negligible research and development (R&D) investment, distorted labor market characterized by high minimum wages and low productivity, and policy inconsistencies, among others. Furthermore, supply-side constraints include the lack of adequate supply of electricity, transport bottlenecks, lack of raw materials leading to high import content of manufactured goods, inadequate supply of key inputs to boost productivity, and strikes, among others. 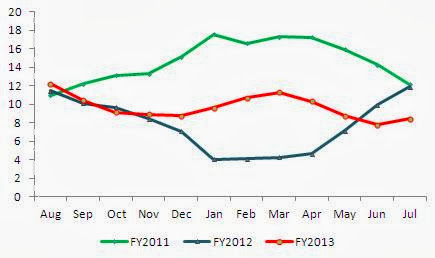 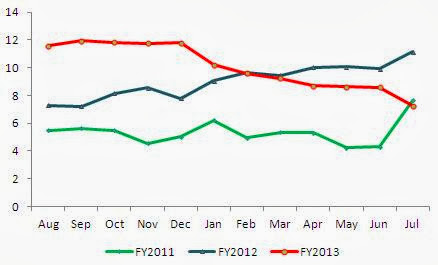 Despite the expected improved agriculture harvest, considering the wage pressures, persistently high price level in India, the rise in administered fuel prices, and the continued depreciation of the Nepali rupee, CPI inflation in FY2014 is forecast at 10.5%, higher than the government’s target of 8%. Civil service salaries were increased by 18% and allowances by NRs 1,000 per month in the FY2014 budget. Meanwhile, the non-agriculture sector workers’ minimum wage was revised up by 29% (Figure 4). Petroleum fuel prices were revised upward on 11 August 2013. While the good harvest will help lower food price pressures (which has a 46.8% weight in the CPI), the overall impact might be lower because the domestic supply is insufficient to meet total domestic demand, making Nepal a net food importing country. For instance, according to the Trade and Export Promotion Center, import of agricultural goods was over NRs 100 billion (about 20% of total imports) in FY2013. 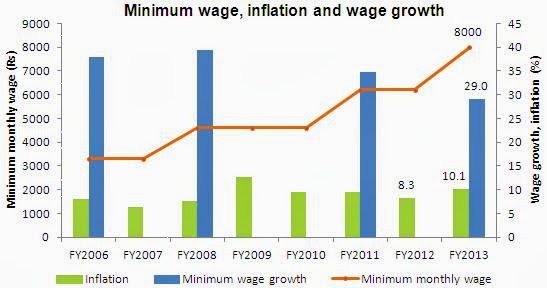 As a result of the slowdown in the growth of net foreign assets[3] of the banking sector— the difference between the value of assets owned abroad and the value of domestic assets owned by non-residents—money supply (M2) growth declined to a rate of 16.4% in FY2013 (NRs 185.1 billion) from 22.7% in FY2012 (NRs 209 billion). Net foreign assets grew by only 18% (NRs 68.9 billion), down from a 59.5% growth rate (NRs 131.6 billion) in FY2012 (Figure 5). The significant rise in imports, the deceleration of remittance inflows, and lower foreign grants led to the slow growth in holdings of net foreign assets.

Net claims on government[4]— direct loans and government securities held by the central bank— fell by 5.2% (minus NRs 8.4 billion), a further decline from the 0.3% fall recorded in FY2012. Following surplus liquidity especially during the beginning of the fiscal year, the banking sector’s credit to private sector rebounded with a growth of 20.2% (NRs 163.2 billion) from 11.3% growth (NRs 82.5 billion) in FY2012.

The BFIs mobilized NRs 176.3 billion (reaching a total of NRs 1,188 billion) in deposits in FY2013, lower than NRs 188.6 billion mobilized in FY2012. This translates into a growth of 17.4%, down from 22.9% in FY2012. While commercial banks and development banks increased deposit mobilization by 17.9%, and 27.1%, respectively, finance companies saw a decline in deposit mobilization by 9.6% (Figure 6). The modest acceleration of government expenditure in the last few months due to the delayed full budget and the low deposit interest rates (due to adequate liquidity in the banking sector) resulted in the low deposit growth. The reduction in the number of finance companies from 70 in FY2012 to 59 in FY2013 also contributed to reduced deposits. 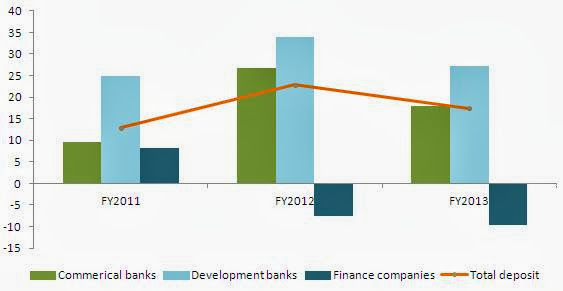 The NRB mopped up NRs 8.5 billion through open market operations (outright sale auction), which has traditionally been one of the monetary tools to manage liquidity in the banking sector.[5] This amount was slightly lower than that transacted (NRs 8.4 billion) in FY2012. NRB mopped up NRs 3.5 billion in mid-September 2012 (at weighted average interest rate of 1.01%) and NRs 5 billion in mid-October (at a weighted average interest rate of 0.94%) of 2012. The higher remittance inflows[6] and periodic liquidity injection through open market operations and Standing Liquidity Facility (SLF) addressed initial concerns, arising from the low government expenditure, over liquidity shortage. The BFIs utilized NRs 55 billion of SLF (with 8% interest rate) in FY2013, up sharply from NRs 5.6 billion in FY2012.

Meanwhile, the central bank injected NRs 285 billion into the banking sector in FY2013, up from NRs 258.3 billion in FY2012, by purchasing $3.2 billion from the commercial banks. To finance the burgeoning imports from India, NRB sold $3.1 billion in the Indian money market and purchased Indian currency equivalent to NRs 274.4 billion in FY2013. In FY2012, the NRB had sold $2.7 billion to purchase Indian currency equivalent to NRs 213.9 billion.

Although the short-term interest rates were lower in the first six months of FY2013 compared to those in the same period in FY2012, they rose in later months due to the tightening of liquidity in the banking sector as a result of the low government expenditure (Figure 8). The 91-day treasury bills weighted average rate was lower in the first five months of FY2013 and higher in the rest of the months of FY2013 when compared to those in the corresponding months in FY2012. Similarly, the inter-bank weighted average interest rate among commercial banks was lower throughout the first six months of FY2013 than what was seen in the same period in FY2012. It started to increase from the second half of FY2013, reflecting the apprehension of the banks over the liquidity shortage arising from deceleration of remittance inflows (and hence demand deposits) and low capital expenditure (along with significant government budget surplus). In FY2013, after the introduction of the full budget in the ninth month, short term interest rates started to fall. Overall, the weighted average annual short term interest rate (interbank and 91 day T-bills rates) was higher in FY2013 than in FY2012.

In FY2013, the weighted average deposit rate of commercial banks was around 5% and the weighted average lending rate was around 12%, resulting in the interest rate spread of around 7%. The spread rate sharply dropped from 8.8% in October 2012 to 6.8% in July 2013, suggesting the gradual improvement in banking sector efficiency. In the meantime, the average base rate of commercial banks was 9.8%, slightly higher than in January 2013 when the central bank mandated commercial banks to publish their base rates. The mandatory provision to publish base rates is expected to make lending rates more transparent and competitive.

As investor’s confidence rebounded following the formation of a new election government, the stock market turnover sharply increased to NRs 22 billion from NRs 10.3 billion in FY2012 and NRs 6.7 billion in FY2011. As a share of market capitalization, the turnover amounted to 2.1%, 2.8% and 4.3% in FY2011, FY2012 and FY2013, respectively (Figure 9). Of the total turnover, the commercial banks’ share was 64% in FY2013 (NRs 14.1 billion), up from 54.6% in FY2012 (NRs 5.6 billion). A higher share turnover indicates more liquid shares of a listed company. Note that Nepal’s stock market is still developing and does not always respond meaningfully to policy changes and political developments. 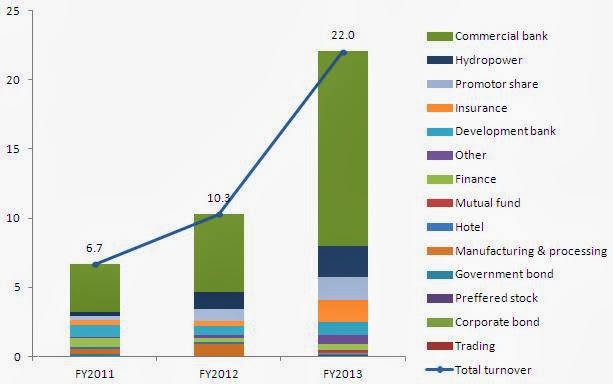 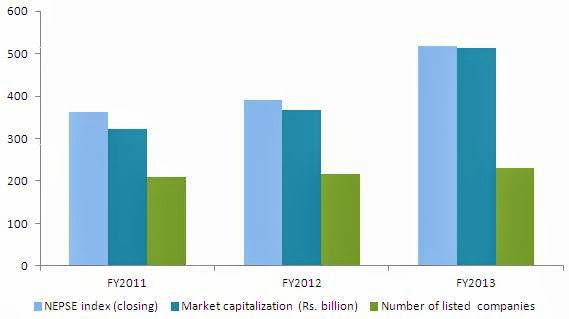 [2] Following the rise in administered fuel prices, insurance and maintenance cost, transport fares were increased by at least 9% and 16% for general transport and trucks (freight), respectively.

Posted by Chandan Sapkota at 9:59 PM No comments: