A very interesting note about the future and trend of export-led growth by Canuto, Haddad and Hanson from PREM division at the World Bank. Does the slackening of import demand due to the global financial crisis from the world’s biggest importers, the US and the EU, mean that export-led growth model is dead? Not really. In fact, a new model is emerging out.

Recession in the big importers

Due to the intensity of financial crisis spilling into the real economy in the US and the EU, low-income countries that depend on exports of oil and apparel to these economies will suffer more. Mexico and Central American countries rely heavily on the US final demand. Similarly, Nigeria might feel a stronger pinch as it exports most of its oil to the US. Also, the 39 Sub-Saharan African countries that have preferential access in export of apparel to the US market under the AGOA might see decline in demand. Meanwhile, developing Europe, Central Asia, and MENA region might see slackening import demand from the EU. Between 2000 and 2008, the US and the EU-25 absorbed about 20 percent of low-income countries’ export growth. Of this 20 percent, nearly half comes from petroleum products. Apparel accounts for an additional 4.3 percent. 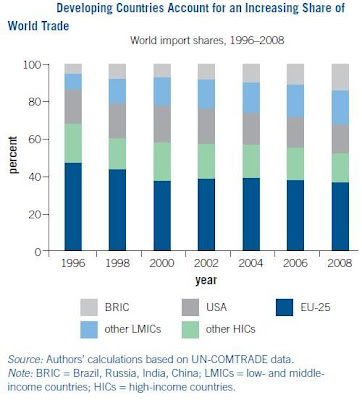 South-South trade is picking up 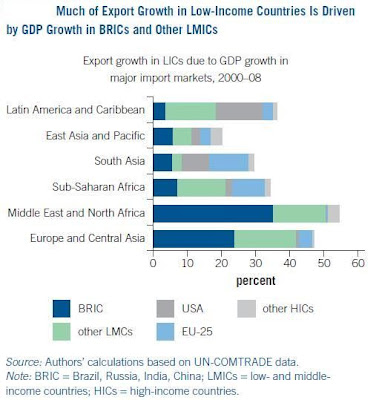 All this means that selective industrial policy could still be an important element of national economic policy in the low income countries. Also, there is already some form of rebalancing happening in global exports and imports.

For an earlier piece on the past and future of export-led growth model see this blog post.

Posted by Chandan Sapkota at 6:07 AM No comments: