Here is my latest article on the banking and liquidity crisis in Nepal. For earlier pieces on the same issues, check out this and this.

When Vibor Bikas Bank (VBB) knocked on the doors of Nepal Rastra Bank (NRB), our central bank, to either inject money in the development bank or to take over management, it rattled the banking industry and the already suspicious depositors. There were rumors and anticipation that due to excessive loan exposure to real estate, housing and construction sectors bank and financial institutions (BFIs) will land in the red sooner or later.

The sudden move by Vibor made depositors panic and policymakers scurry to find a way to avert a ‘Lehman moment’—the day when US investment bank Lehman Brothers collapsed (September 15, 2008) and triggered the global financial crisis that was ensued by the global economic crisis. In Nepal’s banking history, the rescue of Vibor is a ‘Northern Rock moment’—the day when the Bank of England extended emergency financial support to the trouble mortgage lender on September 17, 2007 and saved it from collapsing.

Without deep structural changes in the banking industry, Nepal will definitely see many ‘Northern Rock moments’ and eventually a disastrous ‘Lehman moment’ as well. The tendency to seek short term, quick returns against long term viability and sustainability is leading the BFIs in a path of self-destruction. For a healthy banking industry, Nepal needs fewer but stronger BFIs with sound corporate governance. Furthermore, there has to be an enhancement of regulatory and supervisory capabilities of NRB.

In Nepal, formal banking commenced with the establishment of Nepal Bank Limited (NBL) in 1937. The central bank was established in 1956 after nearly two decades of the start of commercial banking by NBL.Then a decade later, Rastriya Banijya Bank (RBB) was established by the government. 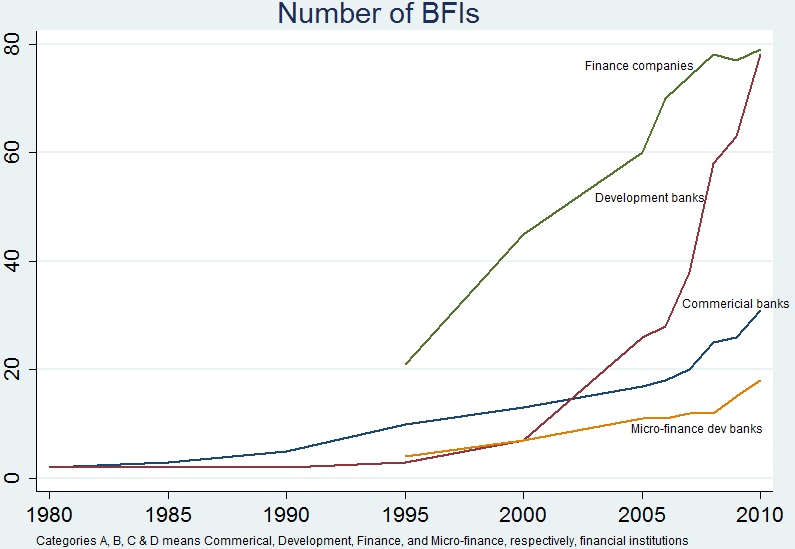 After mid-1990s, the number of BFIs increased multifold. In 1983 and 1993 there were two and eight commercial banks respectively; and by 2006, there were 18. Meanwhile, there were three development banks in 1995, which increased to 28 in 2006. Finance companies came into existence in 1992, and by 2006, they numbered 70. Currently, there are over 292 BFIs, including 31 commercial banks, 78 development banks, 79 finance companies, and 18 microfinance institutions.

The growth in number of BFIs is unprecedented and not warranted by the economic and banking fundamentals of the past decade. It was facilitated by near-retiring NRB officials, who turned a deaf ear to calls for clamping down on BFI growth, in hopes of landing on lucrative private-sector banking jobs.

They have liquid funds of Rs 114 billion (cash in hand is just 16.2 billion, and deposits with NRB Rs 39.3 billion). More than Rs 110 billion is invested in real estate by the commercial banks alone. Over 72% of commercial banks’ credit flows against fixed assets.

As a share of gross domestic product (GDP), total deposit, total credit (including claims on government) and private sector credit are 51%, 54.9% and 43.6%, respectively. 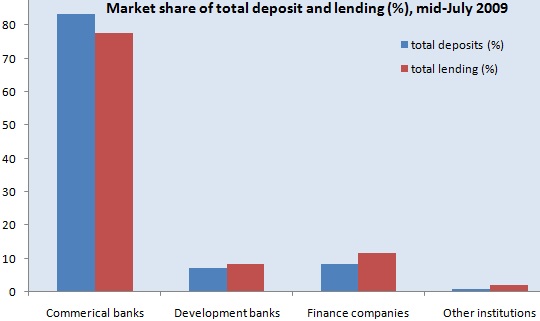 Commercial banks’ deposit rate ranges from 2-12% and loans 7-18%. Interbank lending rate is as high as 10.2%. Right now, the interest spread, which is the difference between lending and deposit rates, is also high. The wider it is, more worrisome the state of BFIs. Likewise, the high inter-bank rate shows that the banks themselves are reluctant to lend money to each other. Some of the BFIs are yet to meet the revised capital adequacy ratio, which is the ratio of a bank’s capital to its risks, laid out by the NRB, keeping in mind their increasing vulnerability to excessive loan exposure to just a few sectors.

Without a proportional increase in depositor base and diversification of investment portfolios, the unnatural growth in the number of BFIs led to intense cutthroat competition in enticing depositors (institutional, government and individual) and borrowers.

Buoyed by rising remittances, the former were incentivized to deposit cash at high interest rates rather than looking for alternative sources of investment.

When the abnormally high prices started to fall, the borrowers were unable to pay back interest and principal in time, leading to a shortfall of liquidity in the banking industry.

Simultaneously, category B, C and D BFIs were finding it hard to borrow more from category A BFIs because the inter-bank lending rate was almost above the average of BFIs’ normal lending rates. Worse, some BFIs have prepared a negative list to not lend money to BFIs which they think are on the verge of collapse.

It was, to a minor extent, compounded by the government’s inability to mobilize development expenditure, the big institutional depositors’ decision to pull out mature deposits from fledging BFIs, and a slowdown in deposits growth rate. The combined effect of all these factors hit hard banks such as Vibor that had substantial loan exposure to a few sectors, compelling them to seek NRB’s intervention. In effect, we are seeing a serious erosion of confidence in our banking system, and a surge in demand for commodities like gold and silver.

By overlooking the need for having a limited number of BFIs, the evolving depositor base, and financial penetration over the years, the NRB let too many BFIs to pop up. This created a BFI bubble. This was followed by intense competition of not only between banks in the same category but also between BFIs in different categories, leading to an informal war in offering high deposit rates and lending without differentiating markets, products, and borrowers’ creditworthiness. It reflected bad corporate governance, and a lack of innovation and R&D in the sector. The resulting lending surge in real estate and housing markets unnaturally swelled their prices, leading to a real estate and housing bubble.

There have been misleading and incongruous arguments floating around about the causes of the ongoing liquidity and banking crisis. They are made by stakeholders who fail to see how their vested interests and incompetence is jeopardizing the future of the banking industry, and is potentially derailing an already unstable economy.

First, bankers and businessmen are arguing that delayed budget and disbursement of development expenditures are causing liquidity crisis. This argument does not hold much water. It is true that budgets have been coming out late for two years now, and there has not been normal flow of money from the Ministry of Finance and other Ministries to the respective corners of the country via BFIs. This has definitely limited liquidity in the banking system. But it in itself is not the main cause. Instead, it is a minor stimulant to the liquidity crisis. If delay in development expenditure is the cause, then why did we not have liquidity crisis when similar episodes occurred in the past?

Second, the withdrawal of large amount of money by institutional depositors, especially NRB and Nepal Army, has drastically reduced reserves in BFIs’ vaults and squeezed available liquidity. This again is a stimulant to the liquidity problem, not its main cause. If just by pulling out a few millions of mature deposits by institutional depositors puts the BFIs in trouble, then there is something wrong with the way they are doing business. It points to bankers’ incompetence and inability to run BFIs.

Third, while some argue that people are either stashing money at home or are investing in commodities like gold and silver, others assert that the compulsion to divulge source of income on transactions above Rs one million is restricting deposits. Again, both are not the real causes, but stimulant to the liquidity crisis. These arguments are trumpeted by certain businessmen who are afraid of divulging their sources of income and dutifully pay taxes to the government.

Fourth, some argue that a decline in reserves, precisely monetary base (which is equal to currency in circulation and reserves of banks held in central bank), due to a slowdown in growth of remittances, led to a situation where credit growth was higher than deposit growth. They assert that it is resulting in a liquidity crisis, and to return to normal, the NRB should purchase bonds and treasury bills and lower cash reserve ratio and the already high capital requirements (all of which will help increase liquidity). Of all the arguments, this holds some truth. But increasing liquidity without correcting the distorted market would only postpone the inevitable.

The NRB cannot afford to play such a cat-and-mouse game each time the BFIs irresponsibly increase credit without assessing the creditworthiness of borrowers and their deposit growth.

The main cause is that we have too many BFIs catering to too few customers, meaning that in order to survive and meet ever-increasing profit target, they have to have constant flow of money from all sources, that also in higher proportion than previous flows. The higher the number of BFIs, the intense will be competition to attract deposits and the need for higher liquidity. It also means doling out more loans to earn quick returns to meet profit target before the annual general meeting of shareholders and directors.

Many financial and economic analysts failed to perceive the rapid changes happening in the banking sector. Similarly, business journalists utterly failed to even read clues of troubles starting more than a decade ago when the now liquidated Nepal Development Bank (NDB) was put under management review, and when the number of BFIs increased multifold in a matter of just five years.

It might be unsurprising because a majority of business journalists in Nepal do not actually have training in economics and business. They take on-the-job training on business reporting and are behind the curve in fathoming the economic fundamentals and troubles. Ironically, the same analysts who fail to comprehend the evolving troubles are given platforms in the media and civil society, leading to circulation of incongruous ideas and illogical interpretations.

That being said, some observers, journalists, analysts, and bankers (including yours truly) did perceive the looming crises. The warning bell rang when the issue of willful defaulters and excessive non-performing loans of BFIs popped up in 2006.

The existing banking and liquidity crisis is not the usual yada yada about the banking sector troubles and refinancing schemes. It is much more serious than that. Some of the troubled BFIs will go belly up in the coming days and some will find ways to merge with others. There might be runs on some of the struggling BFIs when depositors lose confidence on them.

Lets us be clear that repeated introduction of refinancing facilities will not resolve the recurrent problem; it will only defer the inevitable restructuring of the entire banking sector. Meanwhile, one way or the other, the costs of such refinancing facilities will have to be paid by taxpayers. It is tantamount to bailing out troubled BFIs who got into the mess due to their own incompetence, not due to the public’s desire to withdraw deposits and invest in commodities like gold and silver, and durables.

For the short term, the NRB should use all its tools to increase liquidity so that anxious depositors are calmed down. This should be followed by concrete steps to consolidate our banking system.

I think Nepal should have something like a “Troubled BFI Relief Program.” It could be a powerful body within NRB whose main purpose would be to rescue and restructure troubled BFIs so that the problem is not systemic, and depositors are not induced to run on banks. It should bail out depositors, but not sinking BFIs. Moreover, it could be given the authority to sell assets, change management, force merger or acquisition, and hold the majority of shares of troubled BFIs until they return to a healthy state. It would consolidate the banking sector, and potentially lead to fewer but healthier BFIs that are innovative in providing services to the public, and also not take excessive risks to derail the entire economy.

There economic impacts of M-Pesa, a mobile phone based money transfer system in Kenya that commenced operation in 2007.

Posted by Chandan Sapkota at 10:17 AM No comments: