Be it due to migration (leading to short supply of labor) or increasing demand for workers or adjustment of wages in line with the rise in cost of living, the fact is that wages for agriculture and unskilled workers are increasing. Importantly, in the agriculture sector, both men and female saw equal increase in wages in 2010/11. Wages for both gender increased by 32 percent. Meanwhile, in regular daily unskilled work (jyami), male saw higher increase in wages than female (29 percent and 25 percent respectively). Earlier, female wage increase outstripped the increase in wage of male (except in 2008/09). 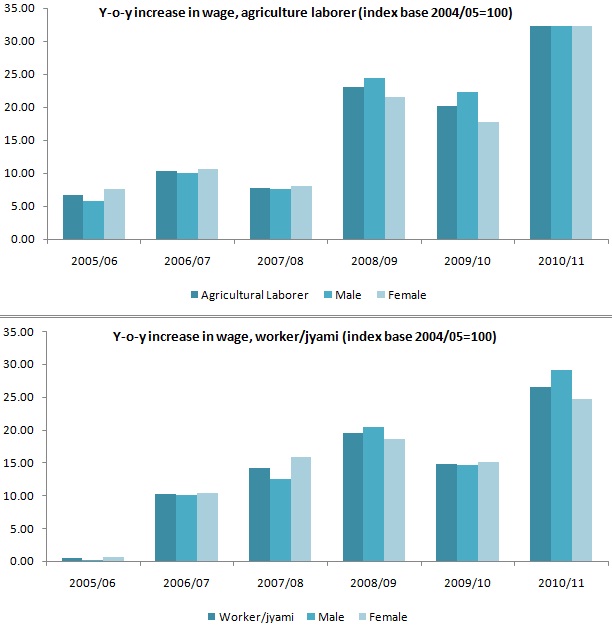 Notice that food prices have consistently outstripped overall inflation after 2004/05 (the base year for CPI). In overall CPI index, the weight of food and beverage is 46.82 percent and that of non-food and services is 53.18 percent. The interesting thing is that despite having a lower weight on overall index, food prices have dragged it higher (it is also influenced by inflation in India and global petroleum prices, which justifies a third of the variability of domestic prices). No wonder food prices have increased drastically in the retail market. More on inflationary dynamics in Nepal here.

Posted by Chandan Sapkota at 1:58 PM No comments: