What types of institutions matter for development and poverty reduction? What lessons should be drawn by policymakers and development practitioners hoping to support institutional change in developing countries?...etc...Such type of questions were addressed at a recently held IIIS Conference on Strengthening Institutions for Development and Poverty Reduction,Trinity College, Dublin. Here is a presentation by Stephen Haber, professor at Stanford University, who draws a comparison between political economy of Mexico and the current state of Sub-Saharan Africa.

Haber gives concise and nice presentation about the impoverishment of Sub-Saharan African and its link to authoritarianism and slow growth. Note that authoritarianism does not necessarily cause slow growth. He argues for drawing capital into production by offering special privileges that could raise rates of return. This is especially relevant if access to credit is constrained and domestic capital mobilization is very slow. But he also warns that coaxing capital into production has been one of the mainstays of authoritarian regimes because they tend to support monopolies and industries that aid the ruling elites to stay in power. This also breeds corruption, lack of transparency, and rent-seeking-- all of which are endogenous. However, attracting capital into production though other incentives that could raise rates of return is not a bad idea. He also argues that authoritarian governments collect little in taxes, which directly affect other dimensions of poverty like education and health, as low taxation means low public investment. Here is a figure about the comparison between Mexico and other economic blocs on tax revenue (he considers Mexico under authoritarian regime until 1997). 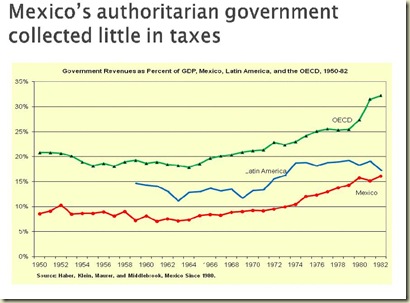 He argues that property rights should be reformed in Africa for development. He also supports aid that aims at increasing government transparency and programs like conditional cash transfers (something like Progressa/Oportunadides). He also argues that the development aid will not be a panacea to slow growth because it would take years to reform the more intractable institutions that have emerged under authoritarianism: weak tax bases, weak educational systems, weak property rights, and inefficient and corrupt police and judiciaries.

Papers from the conference here.

Posted by Chandan Sapkota at 11:50 PM No comments:

Here is paper where the authors look at how best to intervene with fertilizer subsidy in developing countries:

The paper argues that several points should be considered before implementing fertiliser subsidies. These include:

Drawing on experiences of Zambia and Malawi, the authors suggest several practical guidelines for how to maximize the effectiveness of fertiliser subsidies in meeting important national objectives such as improved national food security, alleviation of hunger, and equity. These include:

Posted by Chandan Sapkota at 11:59 AM No comments: