The effects of demonetization have not tapered off completely as second round effect are still persistent (dent in economic activities in informal sector where cash transaction is more prevalent is finally showing up in formal sector activities, which is picked up by official statistics). Additionally, the expected rollout of GST might have affected small and medium scale economic activities (remember that most of the economic activities in India happen at SME level). GST is seen as a burden for SMEs in the short-term as it increases accounting and transactional costs. They may have destocked their inventories and slowed down orders. 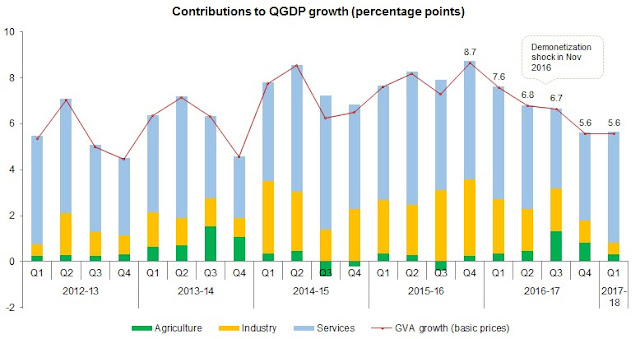 Specifically, agricultural output grew by 2.3% compared to 2.5% in Q1 FY2017. Rabi season output (agricultural crops such as rice, wheat, coarse cereals, pulses and oil seeds sown in winter but harvested in the spring) growth mostly likely was not as robust as in Q1 FY2017. Similarly, livestock products, forestry and fisheries (which account for about 43.1% of GVA of agricultural sector) grew at just 3.4% in Q1 FY2018.

Industrial sector is the one whose output decelerated the most, growing at just 1.6% in Q1 FY2018 compared to 7.4% in Q1 FY2017, probably because effects of demonetization haven’t fully tapered off and concerns over implementation of GST dented economic activities of SMEs. Mining and quarrying activities continued to grow at a negative rate; manufacturing output grew at a mere 1.2% compared to 10.7% in the corresponding period last year; and electricity, gas, water supply and other utility services too grew at a slower pace (7% vs 10.3% in Q1 FY2017). Specifically, production of coal grew at a negative rate (probably signaling lower power demand and excess inventory) and mining activities grew at 1.2% (much lower than 7.5% in Q1 FY2017). Private sector manufacturing activities slumped drastically (had a negative growth), and quasi-corporate and unorganized segment’s activities too slowed down. Furthermore, construction activities such as production of cement and non-metallic minerals slumped.

Services output growth moderated a little bit to 8.7% from 9.0% in Q1 FY2017. Activities in retail & wholesale trade, hotels & restaurants, and transport & communication activities grew at a robust 11.1%, up from 8.9% in Q1 FY2017. Similarly, public administration, defense & other services grew at 9.5% (up from 8.6% in Q1 FY2017). However, financial intermediation, and real estate & business activities slowed down to 6.4% from 9.4% in Q1 FY2017. Trading activities are recovering after the demand denting demonetization (but industrial production is still clouded by this as well as GST’s effect on SMEs) and railways and aviation traffic is growing modestly. Meanwhile, real estate and business activities have slowed down for the same reasons mentioned above. The central government’s increase in revenue expenditure (i.e., recurrent spending) has boosted growth of public administration and allied activities. 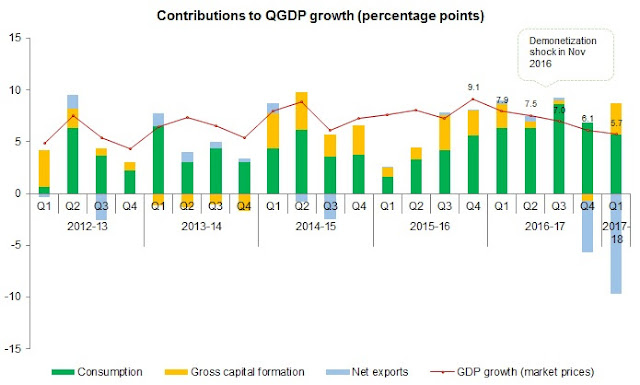 Now, if you look at the QGDP figures from expenditure side, then you will see a continuing slump in fixed capital formation. Gross fixed capital formation growth was just 1.6%, down from 7.4% in Q1 FY2017. Similarly, inventories are not being cleared and restocked as fast as one would like the economy to do it (here is where the uncertainty over GST's effect is affecting SMEs). Change in stock grew at 1.2% compared to 8.9% in Q1 FY2017. Exports growth slowed down but imports growth grew at a robust rate, resulting in a negative net exports growth. A substantial increase in private consumption growth was insufficient to make up for the slowdown in other sectors, resulting in GDP growth (at basic prices) of 5.7%, down from 7.9% in Q1 FY2017.

The government’s GVA growth target for FY2018 is 7.3%. Economic activities are usually robust in the first two quarters as the government tends to front-load spending and households tend to purchase goods ahead of the festival season in the third quarter. However, in FY2017, economic activities, especially industrial and services, slowed down in all the four quarters. This trend is continuing in FY2018 as well, signaling a cooling off trend further accelerated by first by demonetization and then by concerns over the implementation of GST and its impact on SMEs.

Five quarters of consecutive GVA deceleration is not consistent with the promise of a rising and shining Indian economy under the present leadership (even though it has undertaken landmark reforms such as demonetization, GST, easing of doing business, etc). May be there aren’t low hanging fruits! Favorable monsoon will boost agricultural output and gradual recovery of services activities will continue as demonetization fades away fully. But, the real concern here is acceleration both public and private capital formation. Private sector investment is still slowing down as stressed corporates are not able to expand business by borrowing more. Non-stressed corporates (usually SMEs) are concerned by the exact impact of the implementation of GST on their businesses, particularly administrative and transaction costs. Increasing private sector investment is tricky in India and would require drastic measures on both fiscal and monetary policy fronts. Meanwhile, public capital spending needs to be accelerated by effectively tackling a myriad of bureaucratic as well as legislative factors— land, environment, tax incentives clearance, etc.
Posted by Chandan Sapkota at 8:34 PM No comments:

Links of interest (2017-08-31) : Effectiveness of demonetization in India; Electoral constituencies in Nepal

How effective was demonetization in India?

The main objectives of the demonetization shock on 8 November 2016 were: “(i) flushing out black money, (ii) eliminate Fake Indian Currency Notes (FICN), (iii) to strike at the root of financing of terrorism and left wing extremism, (iv) to convert non-formal economy into a formal economy to expand tax base and employment and (v) to give a big boost to digitalization of payments to make India a less cash economy”

The latest RBI annual report 2017 says that the value of IRs500 and IRs1000 notes that were returned was IRs15.3 trillion versus IRS15.4 trillion in circulation before demonetization. This means almost 98.9% of the invalidated notes were returned back to the RBI by 30 June 2017. So, if pretty much all of the invalidated notes were returned back, then does this mean ‘black money’ was not flushed out as touted? In a way, yes! However, the government is also investigating IRs1.75 trillion deposited in banks after demonetization. The hefty penalty, if sources are not substantiated, would mean higher one-off revenue for the government later on. Digitization and formalization of the economy got a boost. RBI detected 762,072 fake notes (valued at IRs430 million) in 2016/17 compared to 632,926 fake notes in 2015/16.

The RBI sees rosy prospects for FY2018, thanks to favorable monsoon (boosts rural demand and lowers food inflation); strong urban demand coming from income boost due to upward revision in house rent allowance to central government employees and the possibility of implementation of wage revisions at state level; reforms to lower the cost of doing business that will increase investment; faster project implementation; higher credit demand following low interest rates post-demonetization in the case of stress-free corporates; etc. It points to slow industrial output growth and low fixed capital formation as concerns for the economy along with challenges to resolving highly indebted corporates and public sector banks.

The CDC was formed on July 20 to complete its task within 21 days. Its term was extended by 15 days on August 16. The new constituencies carved out by the CDC cannot be altered for another 20 years and the CDC recommendations cannot be challenged in any court of law, as per the constitution.

Meanwhile, federal and provincial polls will be held simultaneously in two phases in November 26 and December 7.

The Rasuwagadi-Kerung border point, the only trade route currently in operation between Nepal and China, has been upgraded to an international crossing point. Citizens from other countries besides Nepalese and Chinese can travel across the border.
Posted by Chandan Sapkota at 11:51 AM No comments: