The impact of internet on economic growth

James Manyika and Charles Roxburgh of the McKinsey Global Institute have a very interesting study about the impact of internet on economic growth and prosperity. They argue that the internet accounted for 21 percent of the GDP growth in mature economies over the past 5 years. If you include emerging economies of China, India and Brazil, then the internet contributed to 11 of GDP growth over the past five years.

Their research shows that internet accounts for, on average, 3.4 percent of GDP across the large economies that make up 70 percent of global GDP (13 countries). The total estimated worldwide contribution of internet is $1.672 trillion (2% of global GDP). If internet were a sector, then it would have a greater weight on GDP than agriculture or utilities. 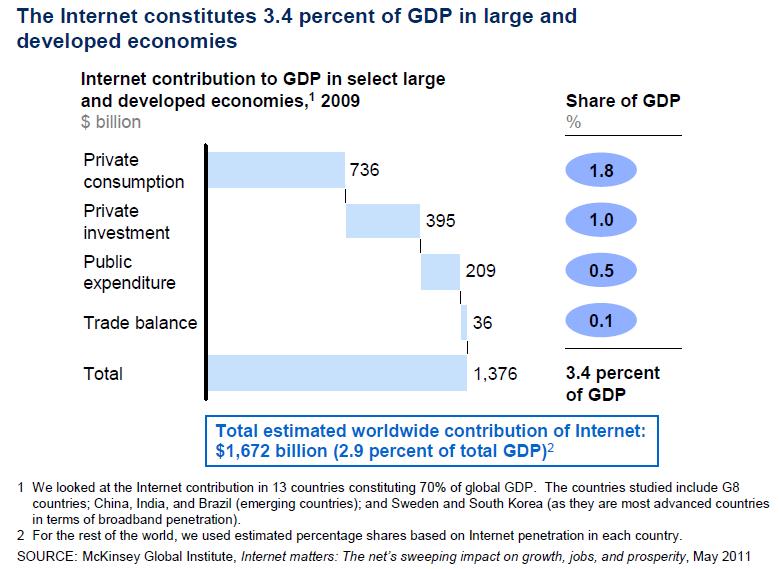 Are we in an era of internet-led growth and prosperity? The study found that internet maturity like in the past 15 years correlates with an increase in real per capita GDP of $500 on average during the period. Quite interestingly, their survey also showed that 75 percent of the economic impact of the internet “accrued to traditional companies that would not define themselves as pure internet players”.

Furthermore, the study states that “while large enterprises and national economies have reaped major benefits from this technological revolution, individual consumers and small, upstart entrepreneurs have been some of the greatest beneficiaries from the Internet's empowering influence.”

[…]we are still in the early stages of the transformations the Internet will unleash and the opportunities it will foster. Many more technological innovations and enabling capabilities such as payments platforms are likely to emerge, while the ability to connect many more people and things and engage them more deeply will continue to expand exponentially.

As a result, governments, policy makers, and businesses must recognize and embrace the enormous opportunities the Internet can create, even as they work to address the risks to security and privacy the Internet brings. As the Internet’s evolution over the past two decades has demonstrated, such work must include helping to nurture the development of a healthy Internet ecosystem, one that boosts infrastructure and access, builds a competitive environment that benefits users and lets innovators and entrepreneurs thrive, and nurtures human capital. Together these elements can maximize the continued impact of the Internet on economic growth and prosperity. 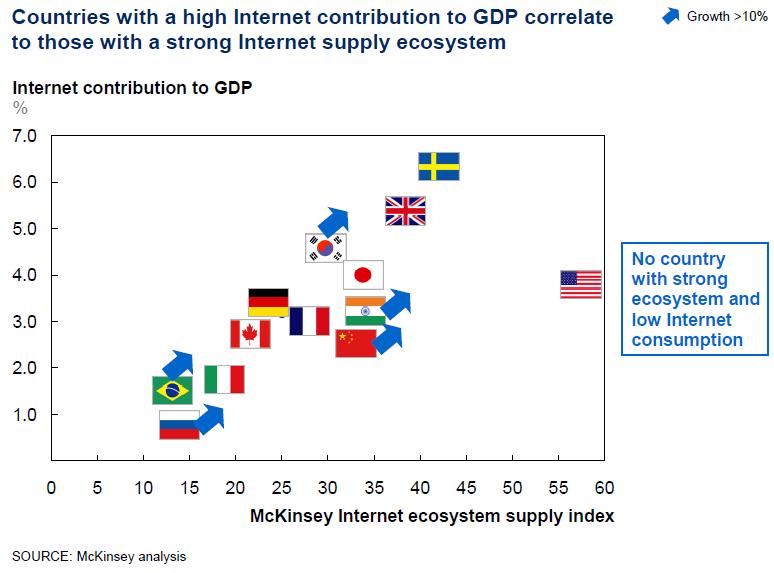 In terms of ease of doing business, Nepal ranked 107 out of 183 countries. Last year, Nepal’s ranking was 110 (non adjusted figure was 116). It is quite an improvement in terms of easing doing business in the country. Most of the push is contributed by making property registration easy, by enacting measures to protect investors and by improving enforcement of contracts.The Finance Act 2008 has reduced the fee for transferring a property from 6 percent to 4.5 percent of the property’s value.In 2011 Nepal improved oversight and monitoring in the court, speeding up the process for filing claims. This is the only reform enacted in terms of easing procedures to do business this year.

Here is how Nepal compares with the regional average:

Posted by Chandan Sapkota at 12:22 PM No comments: