“Over the last three decades, Mexico has aggressively reformed its economy, opening to foreign trade and investment, achieving fiscal discipline, and privatizing state owned enterprises. Despite these efforts, the country’s economic growth has been lackluster, trailing that of many other developing nations. In this paper, I review arguments for why Mexico hasn’t sustained higher rates of economic growth. The most prominent suggest that some combination of poorly functioning credit markets, distortions in the supply of non-traded inputs, and perverse incentives for informality creates a drag on productivity growth. These are factors internal to Mexico. One possible external factor is that the country has the bad luck of exporting goods that China sells, rather than goods that China buys. I assess evidence from recent literature on these arguments and suggest directions for future research.”

That is the abstract of a paper written by Gordon Hanson. Read the full paper here. Hanson argues that “Mexico’s underperformance is overdetermined.” Though faulty provision of credit, persistence of informality, control of key input markets by elites, continued ineffectiveness of public education, and vulnerability to adverse external shocks each may have a role in explaining Mexico’s development trajectory, we don’t yet know the relative importance of these factors for the country’s growth record, he asserts. 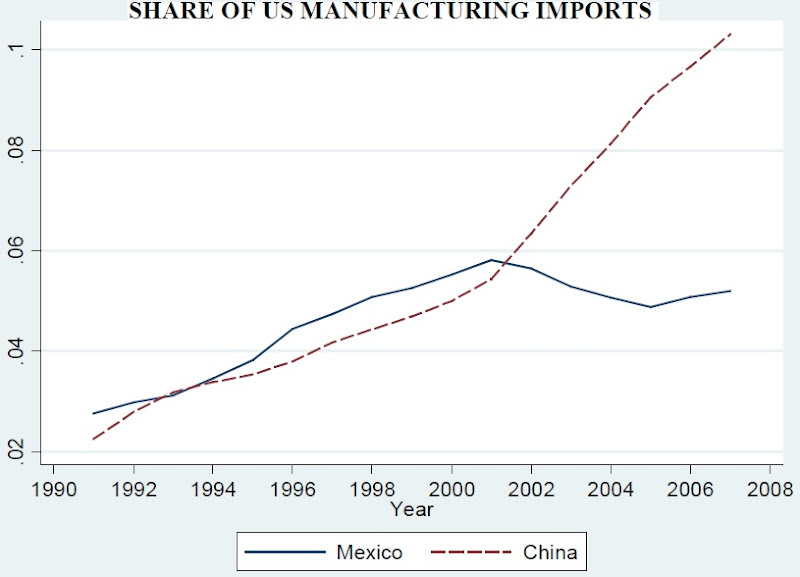 Btw, in 2009, Mexico exported 0.3% of GDP to China and imported 4.1% of GDP from China. The US imports more from China than from Mexico. The manufacturing inputs exported to the US could be either substitute or near-substitute goods. So, China could be displacing Mexican exports to the US.

Posted by Chandan Sapkota at 9:00 AM No comments: