Capital controls, the financial crisis, and the developing countries

The recent financial crisis has reignited debate on capital controls. Before the crisis, most financial institutions believed government control of the inflows of capital was bad for a nation’s economy and credit rating. During the crisis, however, several countries, including Brazil, Colombia, Thailand and Malaysia among others, imposed capital controls that helped reduce economic volatility. This has cleared the stigma that capital controls are bad for the economy, according to a distinguished panel of experts hosted by Carnegie.

Marcos Chamon, an economist at the IMF, highlighted the findings of a recent IMF Staff Position Note on controls in capital inflows and Jorge Arbache, a senior economic adviser to the president of the Brazilian Development Bank, and Boston University’s Kevin Gallagher discussed the policy space available to developing countries for imposing capital controls. Carnegie’s Eduardo Zepeda moderated. 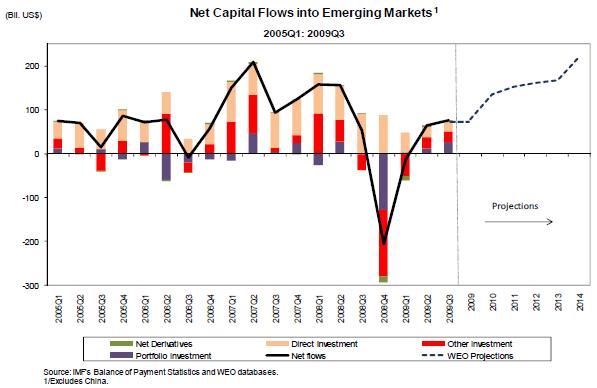 Capital inflows are fundamentally positive when there is a general need for additional financing for productive investment and risk diversification, explained Chamon. However, when there are sudden and temporary surges that could potentially increase macroeconomic volatility, capital controls can be valuable tools.

During the crisis, net capital flows into emerging markets dropped by more than US$ 200 billion between the third and fourth quarters of 2008. Capital controls could help manage that kind of economic volatility:

Conditions for controls: Chamon added that capital controls might be appropriate when: 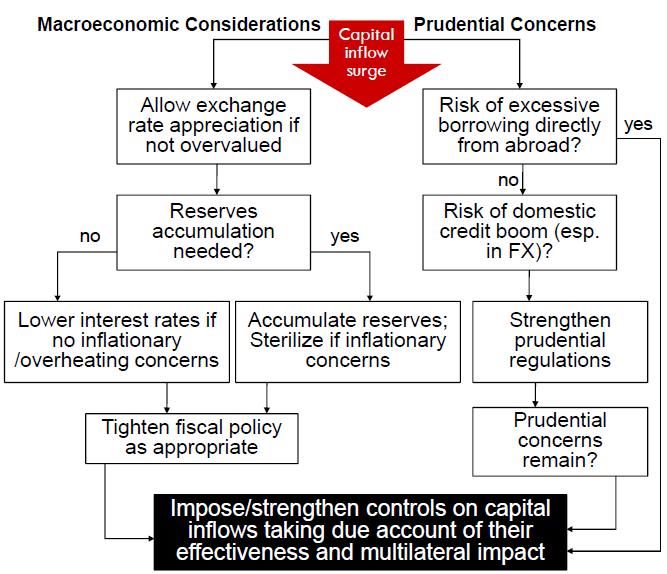 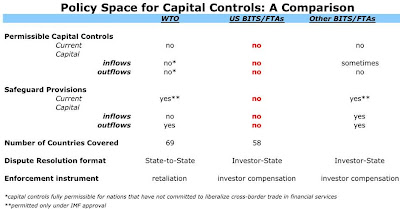 Policies to prevent and mitigate financial crises are forbidden in large parts of the trade regime. The panelists suggested that there should be exceptions for capital controls in trade and investment treaties between countries.

The Example of Brazil

Brazil imposed several capital control measures, including taxes on capital account transactions and on fixed-income and equity inflows. Arbache argued that a more vigorous capital control is needed as a short-term policy option. The Brazilian economy is facing a number of pressing problems, which might require capital controls combined with structural policies for fiscal reform, including:

Capital Controls as a Tool

Capital controls might be suitable for curbing sudden short term capital flows, Gallagher offered. They could be one of several tools used to stem financial market instability. In such a case, capital controls should be a coordinated effort among a majority of the central banks, concluded Gallagher.

[Source: This summary is adapted from an event on capital control organized at Carnegie Endowment. Yours truly wrote the event summary for TED program.] Click here, here and here for the speaker’s presentation.