Yes and No. A new Mckinsey note states that China’s export sector contributed 19 to 33 percent of total GDP growth between 2002 and 2008. That’s only about half of the export contribution indicated by traditional total-exports measures.

Using ‘DVAE analysis’-- which is what you get after subtracting from total exports only those imports used in the production of goods and services that are subsequently exported-- the authors of the note argue that exports have been an important driver of China’s growth, but not the dominant one, and that most common wisdom overestimates the role of exports while underestimating the role of domestic consumption for China’s growth.

The authors of the note estimated that imported goods accounted for 40 to 55 percent of the value of total exports from 2002 to 2008. This means that roughly half of China’s exports represent domestic value added. Concurrently, DVAE’s share of exports generally has risen over time, suggesting that China has become less of a pure assembler of imported goods—a publicly stated government policy goal. 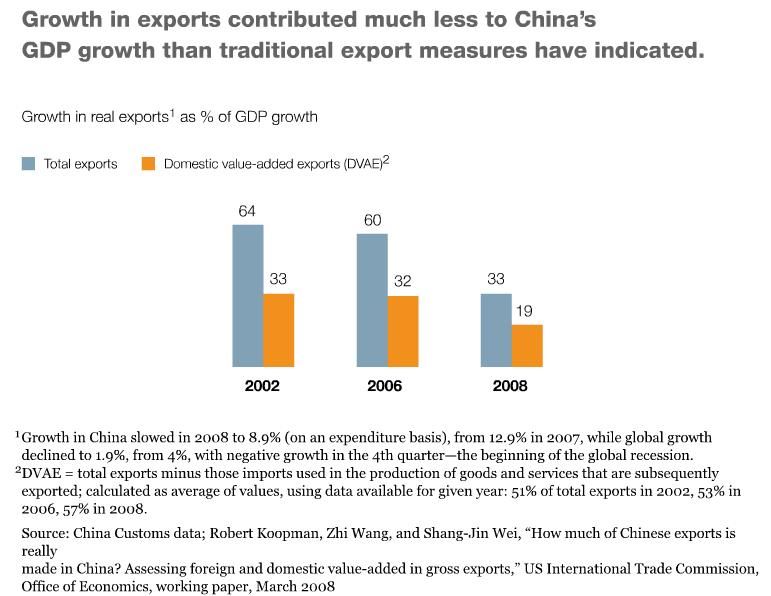 Arguments over the true nature of China’s economic reliance on exports have been rooted in the difficulty of appropriately measuring the export sector. The traditional measure governments and most analysts use is the growth of total exports as a share of GDP growth. This measure indicates that export growth has accounted, on average, for almost 40 percent of the total growth in real GDP since 1990—rising to almost 60 percent since 2000.

Yet these numbers, portraying a dominant and growing role of exports, are at odds with the fact that China was one of the few countries that escaped the great 2008–09 global downturn without a major economic slowdown—suggesting that internal growth played an important role. That’s one reason other economists have used a very different measure: growth in net exports (total exports minus total imports) as a share of GDP growth. By that metric, exports contributed only between 10 and 20 percent of China’s annual 10 percent GDP growth in recent years.

We contend that both measures are misleading. Using total exports neglects the fact that many of China’s export shipments include a fair number of imported goods that are reassembled, combined with domestic content, or otherwise modified before being exported. Failing to remove these imports from the total export figure overstates how much value exports contribute to GDP. On the other hand, a strict net export measure (exports minus imports) underestimates the contribution of exports to GDP, because many imports aren’t used in assembly and exported but rather sold to Chinese consumers and businesses.

We calculated a measure we call domestic value-added exports (DVAE) to assess more accurately the role of exports in GDP growth. DVAE is what you get after subtracting from total exports only those imports used in the production of goods and services that are subsequently exported. In automobiles, for example, finished imports are not subtracted from our measure of exports. But engine parts imported to manufacture motor bikes for export would be.

Posted by Chandan Sapkota at 10:42 AM No comments: