There is improvement in only two of the nine topics. For an extended discussion on Doing Business 2010/11, see this blog post.
Posted by Chandan Sapkota at 10:02 AM No comments:

In 2009/10, Kazakhstan made it easier to start a business, reduced time required to deal with construction permits, increased protection for investors and facilitated trading across borders. Similarly, Rwanda facilitated credit flows to local firms and reduced time to trade goods across borders. Peru made it easier to register property. Cape Verde and Tajikistan made it easier to pay taxes. Hungary eased the process of closing down a business. With regulatory reform in a number of other areas as well, these countries are some of the top reformers in 2009/10.

What did Nepal do? Well, it did nothing. There were zero reforms. Once again, doing business in Nepal has not improved. In fact, it has become difficult, as shown by the decrease in its ranking by four positions. In 2008/09 it ranked 112, but in 2009/10 its rank is 116, according to IFC’s latest report Doing Business 2011, which ranks 183 economies on key aspects of business regulation for domestic firms.There were zero reforms formulated and implemented last year. Blame bandas, destructive activities of militant youth wings and combative labor unions harassing investors, donation campaign, supply-side constrains, power shortages, incessant political instability, corruption, and industrial strike and insecurity, among others ailments inflicting the Nepali economy. A rule based system ensures predictability and reduces uncertainty, facilitating entrepreneurship if the rules are business-friendly. This is missing in Nepal.

While the rest of the world reformed business regulation, making it easier for entrepreneurs to unleash their creative (and destructive) instincts, Nepal did not do anything last year. India made the most progress among South Asian countries. Singapore is still the most favorable place to do business, followed by Hong Kong, New Zealand, the UK, the US, Denmark, Canada, Norway, Ireland, and Australia. This year’s top ten economies which reformed the most are Kazakhstan, Rwanda, Peru, Vietnam, Cape Verde, Tajikistan, Zambia, Hungary, Grenada, and Brunei Darussalam.

India implemented 18 business regulation reforms in seven areas covered by the report. These reforms focused on technology—electronic business registration, electronic filing for taxes, an electronic collateral registry, and online submission of customs forms and payments. Similarly, Bangladesh made it easier to start business by setting up online registry system. It also sharply reduced property-transfer tax. Maldives allowed registered companies to own land as long as all company shares are owned by Maldivians.

Globally, 117 economies carried out 216 regulatory reforms in the past year alone. They eased regulations to start and operate a business, strengthened transparency and property rights, and improved efficiency of commercial dispute resolution and bankruptcy procedures. Doing Business gives higher scores in some areas for stronger property rights and investor protections, such as stricter disclosure requirements in related-party transactions. The ranking is based on perception of business environment of domestic, primarily smaller companies and regulations that applies to them through their life cycle.

The ranking is not a holy grail to judge the entire aspects related to business environment in an economy. It is perceptional and businesses actually say what they think is obstructing their progress, regardless of costs and benefits associated with regulation, its viability in a given economy, macroeconomic conditions, infrastructure, workforce skills and security. Still, it shows something that is very important to entrepreneurship and the creation of jobs in the formal sector. The report was first launched in 2003.

In each of the nine topics, the economies that improved the most in 2009/10 are Peru (getting credit), Congo DR (dealing with construction permits), Samoa (registering property), Ghana (getting credit), Swaziland (protecting investors), Tunisia (paying taxes), Peru (trading across borders), Malawi (enforcing contracts), and Czech Republic(closing a business). The economies of East Asia made it easiest of all for local firms to do business.

A ranking on competitiveness of economies is published by the World Economic Forum. The latest Global Competitiveness Report 2010/11 shows that government instability/coups, corruption, and policy instability are the three most problematic factors for doing business in Nepal. These are followed by inefficient government bureaucracy, inadequate supply of infrastructure, restrictive labor regulations, and poor work ethic in national labor force. Interestingly, tax regulations and tax rates are the least problematic factors for doing business in Nepal. It means that the biggest constraint is political. 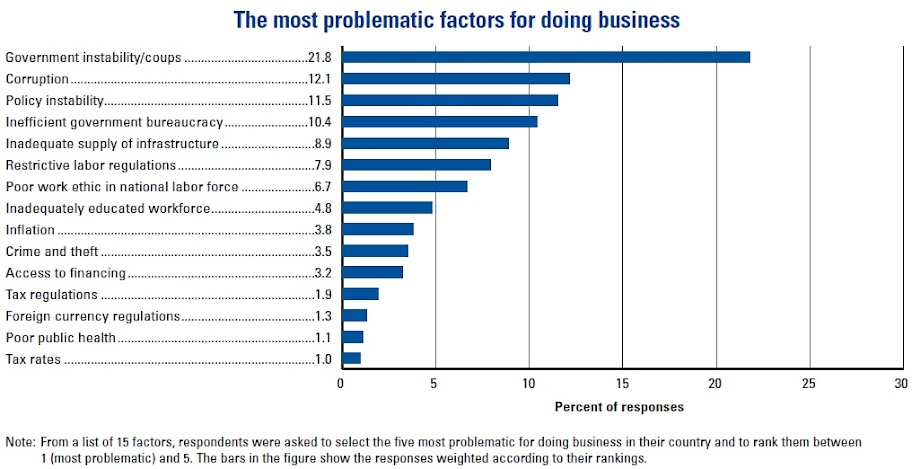 The GCR identified Switzerland as the most competitive nation. Among 139 countries, Nepal ranks 130th in terms of competitiveness with a score of 3.34 (7 being the highest; Switzerland has a score of 5.63). Last year, Nepal ranked 125th, which means that the economy's competitiveness declined by five positions. Look at the South Asian countries, India ranks 51th (two positions down from last year); Bangladesh ranks 107th (one position down); Pakistan ranks 123th (twenty-two positions down); and Sri Lanka ranks 62nd (17 positions up).

The Global Competitiveness Index (GCI) is based on 12 pillars of competitiveness, providing a comprehensive picture of the competitiveness landscape in countries around the world at all stages of development. The pillars are: institutions, infrastructure, macroeconomic environment, health and primary education, higher education and training, goods market efficiency, labor market efficiency, financial market development, technological readiness, market size, business sophistication, and innovation.

Posted by Chandan Sapkota at 9:18 AM No comments: