The World Economic Forum has published an updated version of its global competitiveness rankings by including potential of and opportunities from rapid technological change (dubbed as the Fourth Industrial Revolution [4IR]), which is also one of the critical factors for higher productivity and an important determinant of long-term growth and income.

The new report is named Global Competitiveness Report 2018 (GCI 4.0 2018) and includes a number of new, critically important factors such as entrepreneurial culture, companies embracing disruptive ideas, multistakeholder collaboration, critical thinking, meritocracy, social trust. These factors complement traditional components such as ICT and physical infrastructure, macroeconomic stability, property rights, and years of schooling. They together enhance human capital, innovation, resilience and agility. This year’s report also introduces a new benchmark that scores an economy from 1 to 100 (the largest figure being called the frontier that each country should aspire to reach).

The index includes 98 indicators grouped into 12 pillars of competitiveness: Institutions; Infrastructure; ICT adoption; Macroeconomic stability; Health; Skills; Product market; Labour market; Financial system; Market size; Business dynamism; and Innovation capability. Some of the pillars of competitiveness are the same as in the previous reports, but some are different or regrouped (especially those to do with ICT and innovation). 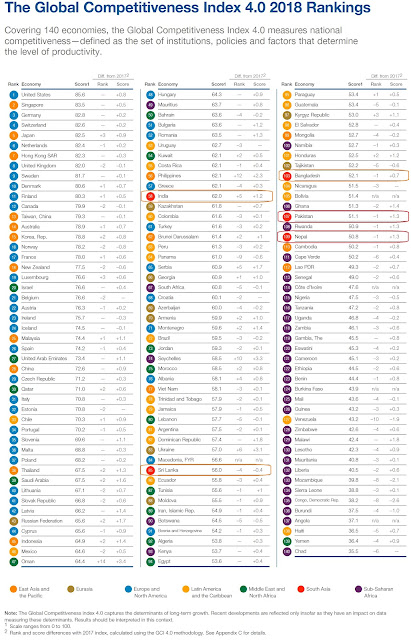 The 2018 ranking is not compatible with rankings in the past. However, they include backcasting estimation for 2017 that can be compared with 2018 edition. The logic behind the change in competitiveness scoring is that the pathway to prosperity through progressive industrialization by leveraging low-skilled labor is now diluted by the advent of the 4IR. The cost of technology and capital is lower than ever (but would still require a number of other factors for adoption). It calls for a holistic approach to competitiveness, as a good performance in one pillar doesn’t make up for a poor performance in another (investing in technology without investing in digital skills will not yield meaningful productivity gains). All pillars are weighted equally rather than according to a country’s current stage of development.

With a score of 85.6, the United States is the closest economy to the frontier, the ideal state (100), where a country would obtain the perfect score on every component of the index. The other in top 10 are: Singapore, Germany, Switzerland, Japan, Netherlands, Hong Kong SAR, the United Kingdom, Sweden and Denmark.

In South Asia, all economies need to enhance innovation capacity, technological readiness and address the usual development constraints related to institutions, infrastructure and skills. In ICT adoption and innovation capability, the region lags behind from the rest of the world (although India is an outlier with 31st rank).

India leads the region in all areas of competitiveness except for health, education and skills, where Sri Lanka boasts the highest life expectancy (67.8 years) and the workforce with the highest amount of schooling (9.8 years). The report notes that India has invested more heavily on transport infrastructure and services, while Sri Lanka has the most modern utility infrastructure. The quality of Indian research institutions stands out in the region.

Nepal is the least competitive country in South Asia. It ranks 109 out of 140 economies included in the report. In none of the four broad components it ranked below 100. Its overall comparable rank in 2017 was 108.

In markets component, it ranks 105 out of 140 economies. Within this component, the ranking on product market is 130, labor market 125, financial system 58, and market size 84.

In innovation ecosystem component, it ranks 105 out of 140 economies. With this component, the ranking on business dynamism is 98 and innovation capacity 110. 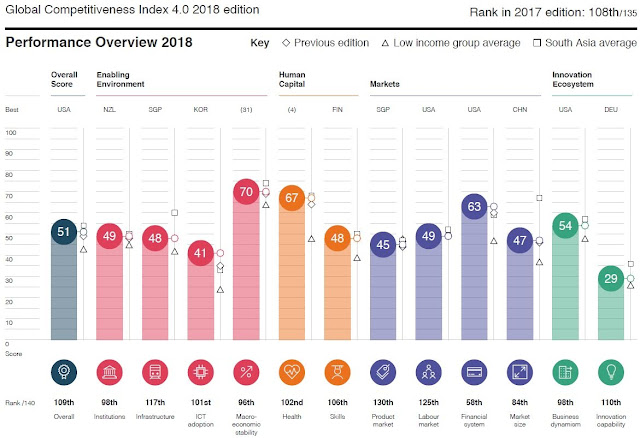 Despite the importance of 4IR now, for many of the low-income countries (also least competitive ones), the main causes of slow growth and low level of prosperity continues to be ‘old’ development issues such as institutions (security, property rights, social capital, checks and balances, transparency and ethics, public-sector performance and corporate governance), infrastructure (road, rail, air, electricity, water connectivity) and skills (education, critical thinking). They cannot ignore these issues and hope to achieve technology-based leapfrogging.