It was published in The Kathmandu Post, 20 September 2016. Previous posts on remittances and migration here.

If there is one consistent narrative about Nepal over the last two decades, it must be about migration and remittances. Political and development activities in the country have always remained volatile. While political culture is punctured by intra- and inter-party fighting and external interference, economic development is beset by stalled projects and implementation complexities arising from sub-standard procurement and eroding bureaucratic capacity. However, migration and remittances have been notably resilient to internal and external shocks, providing a crucial support to the economy characterised by high unemployment and slow economic growth but a significant demand for imported goods and services.

Lately, this citadel of stability is starting to crumble following the persistently low fuel prices and sluggish economic growth in most developed and emerging economies. The economic stress, at least in terms of macroeconomic numbers, arising from the gloomy global outlook is gradually being felt in Nepal too. It could soon become a prime trigger factor for economic and social instability. The almost muted response from the politicians and the bureaucracy to this distressing development is mindboggling and irresponsible. 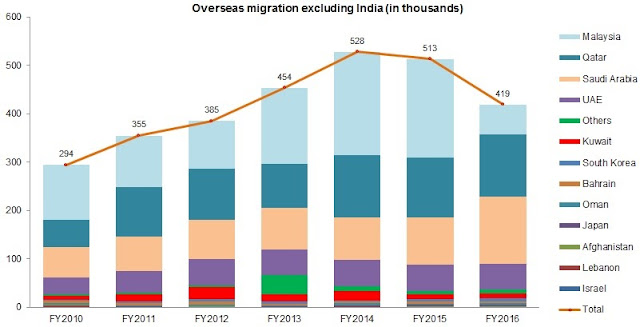 Although statistics show unemployment in Nepal to be lower than in most developed countries (for instance, the latest annual household survey puts it at 3.6 percent), it should be noted that this does not include ‘discouraged’ workers, who are not considered as a part of the labour force. Hence, the actual unemployment is substantially higher, with some agencies estimating it to be over 45 percent. Given the low economic growth and deindustrialisation, especially after the start of the Maoist rebellion, such a high level of unemployment is unsurprising. This is one of the reasons why until last year about 1,400 working age men and women legally left the country daily to work overseas, primarily in Saudi Arabia, Qatar and Malaysia, which together account for about 80 percent of total overseas migration.

Unfortunately, the global economic slowdown (which lowers external demand), low oil prices and the subsequent decline in investment, especially in natural resources, construction and security services, are weakening economic activities in these countries. It is having a direct impact on the Nepali economy through the lower demand for migrant workers and the deceleration in remittance inflows.

The overseas migration growth averaged 14.2 percent between fiscal years 2012 and 2014. It started to decline as low fuel and commodity prices affected investment and subsequently the demand for migrant workers from countries such as Nepal. Consequently, the number of migrant workers decreased by 2.8 percent in FY2015 and then by a further 18.4 percent in FY2016. (The April 2015 earthquake also contributed to the slowdown.) The figures translate into a daily average of 1,446 migrant workers in FY2014, 1,405 in FY2015 and 1,147 in FY2016—a clear downward trend. Migration to Malaysia declined by a whopping 70 percent as it put a moratorium on new hiring and opened up foreign employment in private security services—earlier restricted to Nepali and Malaysian nationals only—to other countries as well. Furthermore, its overall economic growth is affected by low fuel and commodity prices. 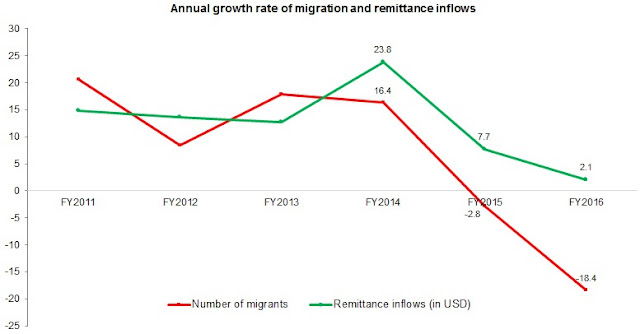 The declining demand for Nepali migrant workers will have a direct impact on remittance inflows, which will then affect household and macroeconomic activities. The growth of the remittance inflows has remained robust, averaging 25.3 percent over FY2012-FY2015. It remained resilient ($6.2 billion in FY2016) compared to other inflows such as foreign direct investment and official development assistance. However, a deceleration in remittance inflows is a very likely scenario given the drastic decrease in the number of migrant workers in the last three years.

Amounting to about 29 percent of gross domestic product (GDP), remittances have been a major factor supporting economic growth, poverty reduction and household expenditure, irrespective of the household’s domestic income. A decline in remittance inflows would lower the services sector growth, which primarily depends on remittance-financed consumption of imported goods. Since services sector constitutes over 50 percent of GDP, it will bring down overall economic growth as well. Furthermore, lower remittance inflows would likely lower government revenue, which is largely generated from taxes levied on remittance-financed consumption. Another significant impact will be on current account balance, which can easily go into the negative territory like in FY2010 and FY2011. It could then lead to a negative balance of payments and lower foreign exchange reserves. Given the pegged exchange rate with India, high dependence on remittance income and the composition of imports, Nepal needs to maintain reserves to finance at least seven months of import. In FY2011, when remittance growth declined but was not negative, reserves were enough to finance just 7.3 months of import.

The deceleration in remittance income triggered by the slowdown in migration will affect household consumption expenditure (and subsequently poverty), fiscal balance (as high consumption-based revenue growth tapers off), financial stability (as deposit growth slows down), and external sector (as current account and balance of payments fall into the negative territory). 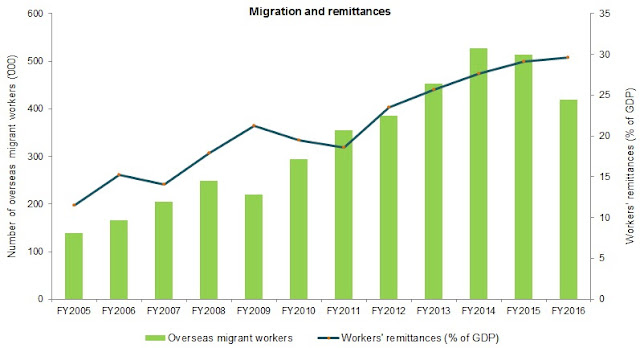 Robust remittance inflows fostered laxity in reducing policy weaknesses and in facilitating sound investment climate as politicians and bureaucracy had to do little work to generate moderate growth of below 5 percent and to reduce poverty. This needs to change now given the deceleration in remittance inflows and the slowdown in the demand for Nepali migrant workers. Medium- and long-term reforms have to be rolled out and implemented to boost investment, lower inflation, and create appropriate investment instruments that can channel the short-term remittance deposits into long-term infrastructure financing. Meanwhile, faster post-earthquake reconstruction works could help create a modest number of unskilled and semi-skilled jobs, which match the employment needs of would-be migrants.

These reform measures could not only address the immediate economic challenges arising from the deceleration in remittance inflows, but also tackle the Dutch disease effects (which broadly refers to the decline in tradable sector, chiefly manufacturing, and an appreciation of real effective exchange rate) seen in the economy since 2000. The primary focus should be on the active facilitation of investment and on transforming from the current low value-added, low productivity activities to high value-added and high productivity activities.

Further delays in addressing these issues would make it difficult for the country to fend off the economic and social blowback arising from the slowdown in overseas migration and the deceleration in remittance inflows.
Posted by Chandan Sapkota at 1:53 PM No comments: