Impact of climate change on poverty

Since a large chunk of the population in developing countries depends on agriculture sector for their livelihoods, they are the most vulnerable to the effects of climate change. They depend more on agriculture and other climate-sensitive natural resources for income and livelihoods. Calculating the impact of climate change on poverty is difficult due to complexities involved in the analysis. Mainly three methods are used by researches, according to Skoufias, Rabassa, Olivieri and Brahmbhatt (2011) in a latest economic brief: (i) economic growth models incorporating climate change impacts to work out various scenarios of how climate change affects the path of poverty over time; (ii) sector-specific channels through which climate change affects poverty, the intensity and heterogeneity of such impact, and appropriate policy responses; (iii) explore the impact of current climate variability on poverty and then the impacts of increased variability on future poverty.

The authors use three growth scenarios and estimate its impact on poverty using the Regional Integrated Model of Climate and the Economy (RICE) developed by Nordhaus (2010). The three scenarios are baseline scenario with a world without climate change, business as usual (BAU) scenario, and optimal abatement (an emission abatement path with full participation by all countries that maximizes global intertemporal economic welfare).

In a no climate change scenario, annual global per capita output growth rate would be 2.2% up to 2055, contributing to more than halving the world poverty rate at $2 a day level to 14.1% by 2055. Under BAU scenario with climate change, world GDP in 2055 would be 1.5% lower than in the baseline and the estimated number of poor people in 2055 would be modestly higher by 10 million (with most of the poor living in Africa and South Asia). Under the optimal abatement scenario, the expected number of poor people would rise by 9 million by 2055. This is because unlike in adaptation measures that benefit poor countries, most of the benefits under optimal abatement of emissions would accrue to higher-income countries. 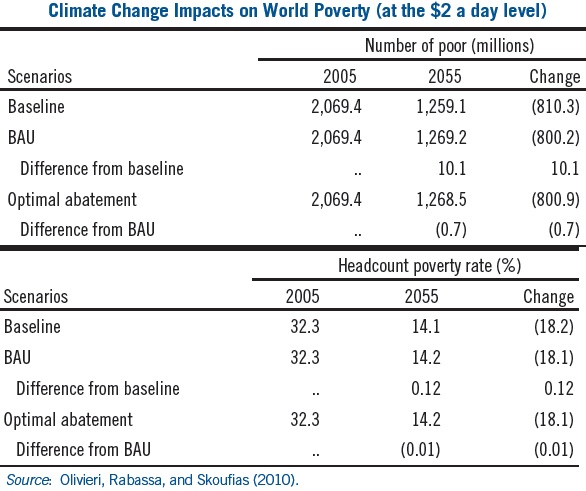 This is the overall impact of climate change on poverty at the global level. However, its impact in and within countries is different. The heterogeneity of climate change impacts on poverty are linked to geographical location and specific household characteristics (if households are net producers or consumers of agricultural goods; income sources; types of assets owned; ability to adapt; and ability to access credit or safety nets).

Assuncao and Chein (2009) estimate that, on average, agricultural output per hectare could decrease by 18% by 2040 as a result of climate change, but at the municipality level, the impacts could range from a decease of 40% to an increase of 15% in Brazil.

Meanwhile, in India, increased mean surface temperature could lead to a 13% reduction in agricultural productivity by 2040 (Jacoby, Rabassa and Skoufias 2011). But, this would decrease average per capita consumption of rural households by only 6% as they derive more income from their labor endowment. For the Indian rural population as a whole, climate change could increase rural poverty between 1 and 6 percentage points by 2040 when compared to counterfactual of zero warming. Also, climate change’s impact falls more heavily on the poor than the rich. The authors also find that autonomous adaptation by Indian households (changes in cropping patterns, input use, and technology) reduces the average long-term loss in per capita consumption from climate change by about half (with weather shock the decline in per capita consumption is 11%; with autonomous adaptation, it is 6%).

Posted by Chandan Sapkota at 2:33 PM No comments: