असारे बिकास: The pitfalls of shoddy and bunching up of capital spending

The media is awash with stories (here, here, here and here) about hasty capital spending throughout the country as FY2016 ends on mid-July. Government agencies, especially the local authorities, tend to award contract for repetitive projects to contractors in the last quarter of fiscal year to avoid freezing of the allocated fund.

The (politically affiliated) local contractors rush to spend money when the monsoon starts (easy to blame the rain and the ensuing floods and landslides for tawdry work). Consequently, a bloated bill is presented at the end of the fiscal year for shoddy development projects, which need to be redone for the next several years. The same pattern of spending is happening amidst the erosion of bureaucratic and institutional capacities along with politicization of the project level decision-making and operational processes.

The upshot: (i) the delay in awarding contracts after necessary review of investment projects lowers actual capital spending relative to the planned level; and (ii) the shoddy construction by unscrupulous contractors, who usually bid for projects that are beyond their own financial and technical capacities, rip off the treasury and force the government to continue such projects for a number of years.

For instance, in the last three months of FY2015, 63% of the capital expenditure (which itself is dismally low) was spent. In the last month, it was 44%. This pattern is not new, irrespective of natural or political shocks (in effect, the bureaucracy blames politicization by coalition governments, and the government blames the tardy bureaucracy). See the monthly spending figure below (unit is in NRs billion). Here I have highlighted six major issues behind this kind of slow spending and bunching of such spending in the last quarter. More on capital spending here and here. 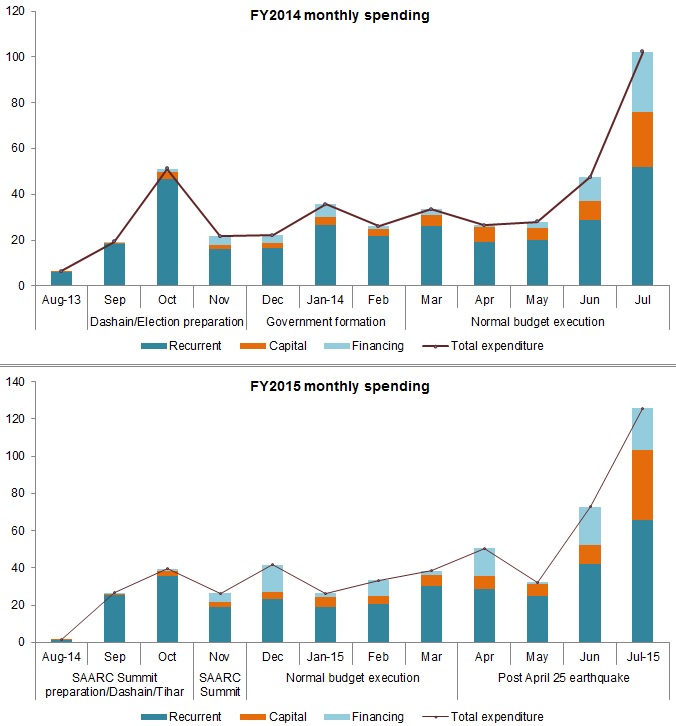 Such low quality of capital spending tends to increase recurrent spending in consecutive years. Especially, the use of goods and services and grants to local bodies-- the two major components of recurrent spending-- tend to swell up. The use of goods and services consists of (i) rent & services; (ii) operation and maintenance of capital assets; (iii) office materials and services; (iv) consultancy and other services fee; (v) program expenses; (vi) monitoring, evaluation and travel expenses; (vii) recurrent contingencies; and (viii) miscellaneous. Grants to local bodies (or fiscal transfers) are used to cover a mix of local development projects and recurrent/administrative costs. These together account for about 8.5% of GDP, which is far larger than capital spending of about 4% of GDP. The governance of such spending has been a major public finance management issue in Nepal. 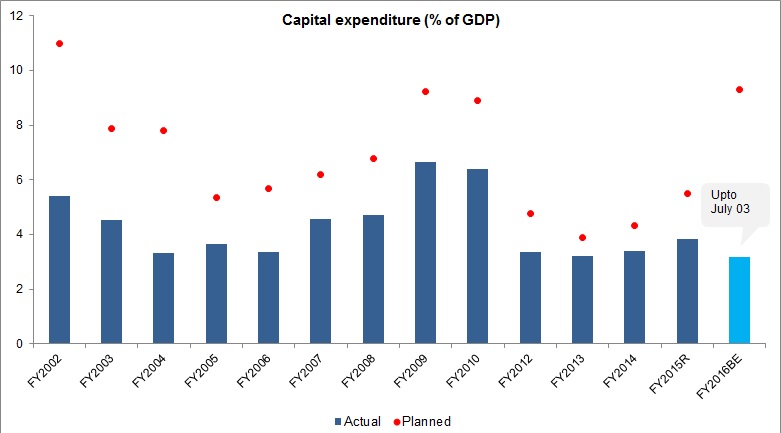 The figure below provides a snapshot of such jerry-built capital projects on recurrent spending in ten successive years. A shock to capital spending sharply increases recurrent spending till the second year, after which it gradually declines and finally dies out after fourth year. It loosely means that shoddy capital spending (“असारे बिकास” in local lingo) is costly to the treasury as its effect is seen in higher recurrent spending in the next four years (in operations and maintenance costs and larger transfer to local bodies without acceptable spending norms). This result comes from the orthogonalized impulse response function of a VAR model (with sample data of about 40 years and endogenous real variables as GDP, capital and recurrent spending, and private investment). If we use SVAR model, where we can allow for contemporaneous effects as well and also put restrictions on some variables (such as capital spending does not contemporaneously affect recurrent spending, but has lagged effect), we also get pretty much the same result. Despite fiscal data quality issues, the result is quite revealing. 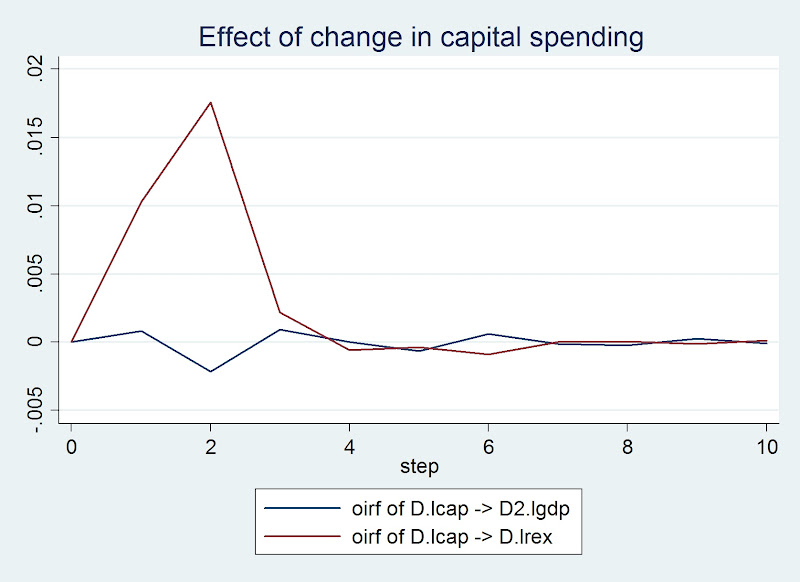