Does coordination failures bind the Nepali economy from moving to more favorable “nearby” products (or new productive activities) that could contribute to higher GDP growth rate?

A “product space” is used to analyze if coordination externalities pose as a binding constraint on growth[1]. It is argued that the assets and capabilities needed to produce a good are imperfect substitutes for those needed to produce another good “but their degree of asset specificity will vary” (Hausmann & Klinger, 2007). This means that a country’s capability to produce one good is somehow tied with the installed capability in the production of other similar goods, i.e. nearby goods.

For instance, either labor or capital or both used by company A to produce good X might be used by company B to produce good Y. Though good X and good Y are different and have different market prices, the factors used to produce one good can be used to produce (or at least initiate production of) other goods at a lower cost. In order to produce good Y, company B can benefit from the trained human resource or existing capital stock of company A. Similarly, company B can use infrastructure already installed for A’s use and make good Y. This means that the existence of already installed capability can be easily used to produce other “nearby goods” that uses similar capability. This would mean that future structural transformation would depend on what is ‘close’ to existing production, creating strong path dependence for the emergence of new exportable products (Klinger, 2007). The overall connectedness of an economy’s export basket affects the rate of export upgrading and the length of growth collapses after a shock to primary export items (in Nepal’s case carpets and garments industries).

As seen in the product spaces below, Nepal has some nearby products which command high price in the international market. Moreover, the existence of “nearby” products is pretty much consistent with the level found in countries with similar income level. However, it should be noted that despite the existence of multiple “nearby” products, the rate of successful upgrading of the production capacity might be affected due to infrastructure constraints. Moreover, the evolution of new nearby products would also depend on the increment in the existing stock of facilitators/infrastructures such as road transport, electricity, and communication. 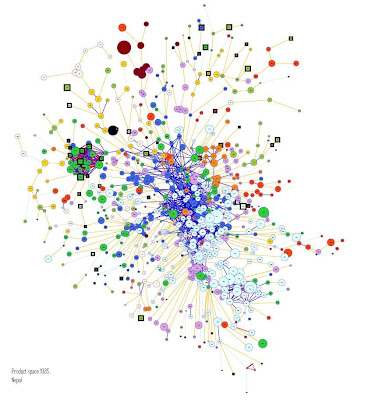 The comparatively advantageous products in the export market (denoted by black squares) are scattered and the ones where the potential to upgrade to new productive activities lied in the labor intensive sectors (denoted by green dots towards the left of Figure 1), particularly garment and textiles. This is the only region on the product space above where the nodes are connected by red lines (which means proximity greater than 0.6). Moreover, the remaining links in that region are dark blue, which means a proximity index between 0.55 and 0.65. It indicates that this sector has the installed capacity to move to more productive activities that could generate comparative advantage on exports. We also see some red links connecting nodes at the bottom of right hand corner of the figure. These nodes correspond to machinery, especially electronics.

Though there are no comparatively advantageous products at present in this sector, it could potentially be a promising one due to the existence of high proximity between other products. The product space also shows other products that are exported with comparative advantage (scattered black boxes in the figure). These products do not have high proximity and there is no scope of shifting to productive activities around them, i.e. their installed capability does not benefit the production of nearby products that use similar capability because there is none! These are just noises in the product space (such as lead and lead alloy products, which are high valued but have low demand in the international market).

The products that were exported with comparative advantage in 1985 were: trousers, breeches of textile fabrics (8423)[3]; skirts of textile fabric for women (8434); undergarments of textile fabrics for women (8443); textile men shirts (8441); other textile outer garments (8439); sacks and bags of textile materials (6581); twine, cordage, ropes & cables (6575), women dresses of textile fabrics (8433). In the garments and textile sectors, the two most promising products, based on the global market size and the proximity of products in domestic production activities, were undergarments knitted of cotton (8462) and footwear (8510). The other products that seem promising are in the machinery industry (toward the lower right hand in Figure 1). Products that have relatively large share on international market and some degree of proximity in domestic production structure are electronics microcircuits (7638); radio broadcast receivers for vehicles (7621); and photographic cameras, parts & accessories (8810).

The export of some agricultural products was also comparatively advantageous in 1985. However, the production of such products occurred in isolation with very low proximity, if any (see upper right hand in Figure 1). This underscores the earlier argument that high and sustained growth rate is not possible from the export of agricultural products, which are of low value in the global market. The agricultural products that were export with comparative advantage were: leather of other bovine cattle & equine leather (6114); leather or other hides or skins (6116); shellac, seed lac, stick lac, resins, gun resins, etc (9); art, collector species & antiques (8960); fresh or dried grapes (575); fixed vegetable oil (440); beans, peas, lentil & other legume vegetables (542), and other cereal meals & flours (7). Notice that production of all these products are peripheral and are pretty much independent of the installed capacity used in the production of other products. This shows that in 1985 most of the products that were exported with comparative advantage came from the garment and textile industries. 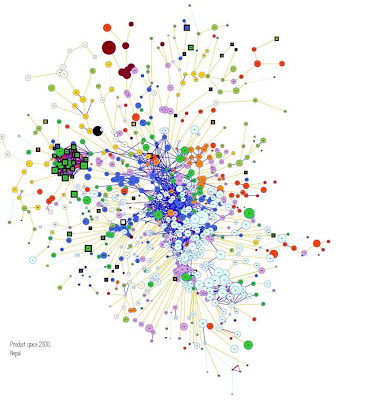 Almost all the products that were nearby the products that were exported with comparative advantage in 1985 were produced and exported successfully in 2000. This means that coordination failures, at least in this sector, are out of question. The failure of this sector in the global market after 2005 has to do with other factors such as poor infrastructure and high corruption, which increased transportation costs and transaction costs, leading to lack of price competitiveness at a time when other big players entered the market with similar products but at a very low price. Due to the absence of nearby products and favorable proximity, the agricultural sector did not see new products added to the list of products that were exported with comparative advantage. Similar is the case with the machinery industry, which showed some potential of generating new competitive products in 1985. The slackness in these two sectors has to do with poor quality of infrastructure and corruption as explained earlier. 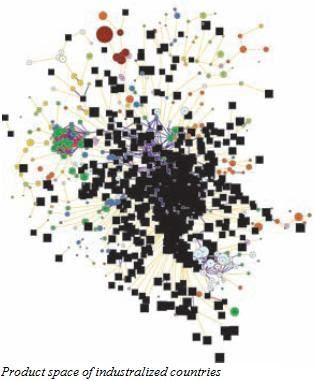 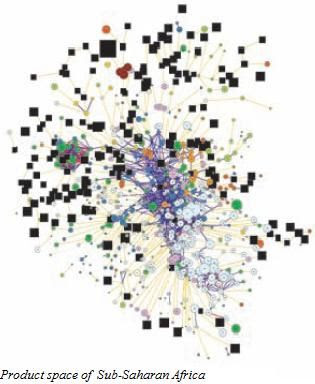 As seen above, Nepal’s production is highly peripheral and sparse, which is not that different from similar income countries (see Figure 1, 2 and 4). Exports related productive structure is concentrated in agricultural (labor intensive) and manufacturing sectors, especially high-valued ones in the garments and textiles industries. There are also relatively more nearby products and proximity in the textile and garment industries. However, despite this why did the garment and textile industry went bust after 2005, the year MFA expired. The answer points towards other factors that hindered the shift in productive activities in the economy, mainly infrastructure and corruption.

This further substantiates the argument that the economy could not upgrade to new productive activities after the end of MFA as there were very few nearby products remaining with high proximity in the textile sector. The backward and forward linkages are also very weak in almost all the industries. Several small sized firms and their production are not linked by medium and large scale firms. For instance, there are around 30 small firms producing medicinal plants. But, there are no medium and large sized firms that could utilize small firms’ production. The production either is processed locally or is exported to India for processing. There seems to be a clear coordination problem here.

However, note that this problem is caused by a stronger constraint, namely a lack of infrastructure (and poor quality of existing ones). It is precisely because of the lack of infrastructure (electricity and road transport) that investors are not willing to invest on medium and large sized processing plants. More than 14 hours of power cuts daily is a major factor in the emergence of such backward and forward linkages. In addition, the delivery time and transportation costs are high in the absence of adequate means of transportation. Hence, the coordination problem itself is dwarfed by much stronger constraints— lack of infrastructure.

The hypothesis that coordination failures/externalities are the binding constraints on growth is not consistent with the analysis presented above.

This is a part of growth diagnostics of Nepali economy I am currently doing as a part of my research. Previous blog post about why taxes do not qualify to be the most binding constraint on growth here. Here is a blog post about the evolution of exports in Nepal. Here is my bet on why infrastructure is the most binding constraint on growth. I will post more updated analysis about the infrastructure constraint in later posts.

Apologies for the unclear equation below (I did not bother to rewrite the equation again just for this blog post)!!

[1] Klinger (2007) provides an interesting metaphor: “products are like trees and firms are like monkeys.” Structural transformation involves the movement of monkeys from the poor part to rich part of the forest. It is easier for monkeys (firms) to jump short distance (i.e. to change products that use similar pre-existing factors).

[2] Each node is a product and its share of world trade determines its size. Node sizes are proportional to PRODY, which is a measure of revealed sophistication of each product. Rather than the distance between products, what matters in this figures is the color-coding of the linkages between pairs of products (also known as proximity): light blue link = proximity under 0.4; beige link = proximity between 0.4 and 0.55; dark-blue= proximity between 0.55 and 0.65; red link=proximity greater than 0.6; black square indicates product exported with comparative advantage; if a country is producing goods in a dense part of the product space, then the process of structural transformation is much easier because the set of installed capabilities can be easily redeployed to other nearby products. If a country specializes in peripheral products, then structural transformation is not that easy. The proximity between two products

is the minimum of the pairwise conditional probabilities of a country exporting a good given that it exports another:

and RCA stands for revealed comparative advantage and is calculated as

, where exports is denoted by

[3] The number in brackets refers to Standard International Trade Code (SITC) of the products.

Posted by Chandan Sapkota at 1:26 PM No comments: