As evidenced by the increasing enrollment rates among Nepali people, the supply of education among those entering the workforce has been increasing since 1991. A push for universal primary education has drastically increased enrollment in primary and secondary education. 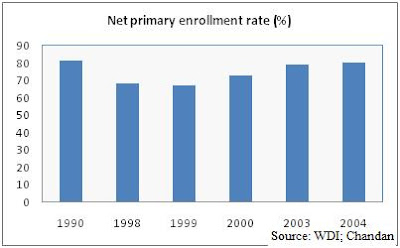 Not only primary and secondary enrollment, net tertiary enrollment is also increase and is at its highest level. Since there is a free flow of labor between India and Nepal, any discrepancy in demand for and supply of labor in the market is compensated by importing labor from India. At present, 15% of the labor market demand in the skilled sectors is fulfilled by importing human resources from India, according to the ILO. 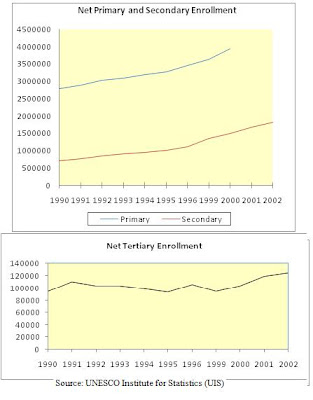 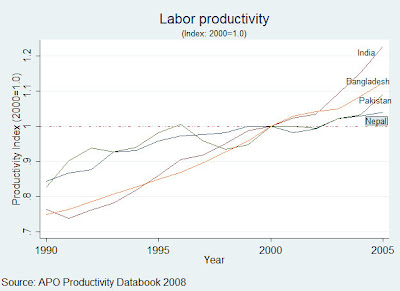 Nepal’s youth and adult literacy ratio has satisfactorily improved since 1991. Though Nepal’s literacy rate is still slightly below the regional and LIC average, it is improving and the trend is encouraging. 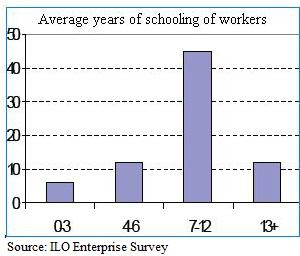 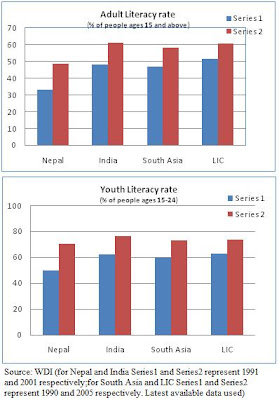 Public spending on education (% of GDP) is satisfactory and is increasing in recent years. Based on income per capita and the size of the economy, Nepal’s expenditure on education is not that different from other low income countries. In fact, looking at the per capita income of regional counterparts like India, Bangladesh, and Pakistan, Nepal’s spending is pretty impressive. 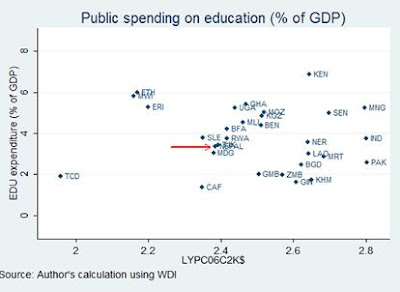 Finally, the return to investment in education is low in Nepal. This is indicative of the fact that the economy is not suffering from a shortage of human resources because if it were so, then the wage rate of the existing employees should have been high. The shadow price of a binding constraint should be high and rising; if supply of skilled workers is binding, then firms would be offering them increasingly higher wages. This seems not to be the case in Nepal. 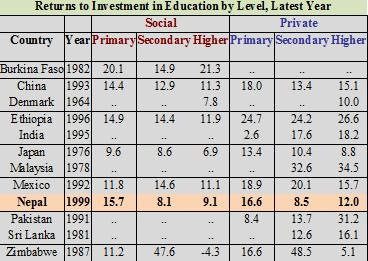 These data and analysis are difficult to reconcile with a hypothesis that the provision of education (human resource) is a binding constraint on Nepal’s economic growth.

Note that I am not saying education (lack of human resources) is not a constraint on growth in the Nepali economy. As is seen above, it is definitely a strong constraint. However, I don’t think it is as binding a constraint as bad infrastructure is. Here is my take on bad infrastructure as the most binding constraint on economic activity in Nepal. I have expanded on it a lot and will post the whole stuff later on. So far, I have discussed these constraints: taxes, coordination failures, and a discussion of the evolution of the exports sector. Discussion on other constraints to follow soon.

[1] Data correspond to studies done in the year indicated in the table. Dilip Parajuli from the World Bank did the study on returns to investment in education for Nepal in 1999. Latest data available are used. Readers should be cautious in interpreting these data for comparative purposes because some of the data for countries correspond to the state of education sector two decades ago.

Posted by Chandan Sapkota at 4:17 AM 2 comments:

Who gets hit the most by slow growth and recession?

This one pager argues that the working poor (the bottom 20th percentile in the income distribution) are hit less intensely than regular workers. Why? Because “wages at the bottom of the distribution are already so low that there is little room for further cuts”. Moreover, a large portion of the poor workers do part-time work, which is a desired over full-time workers by employers in order to put down pressure on payroll.

Is this a matter of relief or comfort? Well, not really! The paper does not say that poor do not get hurt; what it says is that the working poor are affected less intensely than full-time wage earners. The working poor might loose income marginally but the fact is that this marginal loss in income means a lot to their share of household income and the corresponding consumption budget. Also, it is generally agreed that poor people have the highest marginal propensity to consume. Social protection, cushioning the loss in marginal income, and social safety are necessary to not only help the poor but also to stimulate local economy.

… that periods of slow growth and recession in Mexico and Chile improved the poor’s relative income. That their labour income does not fall as much as others’ during crises may offer comfort, but even a small decline can exact a heavy toll. Safety nets and emergency assistance help protect minimum consumption levels, but policies to confront economic crises should not be mere mitigation strategies. They should include interventions to strengthen human capacity and improve the poor’s main asset: labour.

In a related IPC working paper the authors look at the changes in labor markets and the dynamics of inequality and poverty in Brazil, Chile, and Mexico. One interesting finding is that the earning per worker is a function of slow-moving changes in the structure of employment and the characteristics of workers and rapid changes in the prices of labor for specific workers. The structure of employment is affected by demographic changes, education, and structural transformation in employment from agricultural labor.

Posted by Chandan Sapkota at 2:31 AM No comments: