So, technically the EU, Japan (and the US) are in a recession. The wave of global recession is in continuum right now. The crisis sparked by sup-prime mortgage crisis emanating from the US is getting harder to contain even in the face of rock bottom interest rates. This means monetary policy is getting ineffective. The last resort: call on the government! There has already been stimulus in the US, China, and some form of this sort in the EU. In its World Economic Outlook update for November, the IMF also argued that world output growth will fall to 2.2% and fiscal stimulus is the (only) option as monetary policy is not doing anything good right now. Already, India has lost $57 billion due to the current global crisis.

Now comes India, where businessmen surveyed by the WEF called for a fiscal stimulus package to uplift the quality of infrastructure and to prop up expected downslide in growth rate, which is forecasted to slide to 7% from 9% at present.

…“contra-cyclical fiscal stimulus” through the speeding the implementation of infrastructure projects already in the pipeline would certainly help economic growth to rebound. Interestingly, some young Indian parliamentarians also argued that India now needs Obamas- not one, not two, but many!

“From our young sportsmen, our young businessmen, our young politicians,” said Rahul Bajaj, Chairman, Bajaj Auto; Member of Parliament, India, hopefully we are going to have more than one Barack Obama!”

New leadership and new ideas are desperately needed to address critical challenges faced by India. First among these, said Deepender Singh Hooda, Member of Parliament, India, is “the resurgence of divisions based on caste, religion and region.” Moreover, Hooda pointed out that, while India has enjoyed strong economic growth overall, certain sectors of society have been left behind and rising inequality is increasing class tension. Bihar is the most equal state in India: as states become more prosperous, they become more unequal. The shift from an agriculturally-based economy to services and manufacturing also increases tensions over issues like land rights.

Posted by Chandan Sapkota at 11:05 PM No comments:

The IMF has again readjusted its global growth forecast due to rising financial sector deleveraging and dwindling producer and consumer confidence. World output growth forecast is scaled down by around 0.75 percentage point to 2.2 percent in 2009 (from 5% in 2007 to 3.75% in 2008 to 2.2% in 2009…this could go even down!). Both the advanced and emerging and developing economies are expected to further slow down. Worse, in advanced economies output is forecast to contract on a full-year basis in 2009, the first such fall in the post-war period, according to the IMF. It warns that the final outcome is highly uncertain and could much more worse than expected.

Rather than relating the magnitude of this crisis to the Great Depression, the World Economic Outlook Update from the IMF states that the current and expected contraction is “broadly comparable” in magnitude to those that occurred in 1975 and 1982. 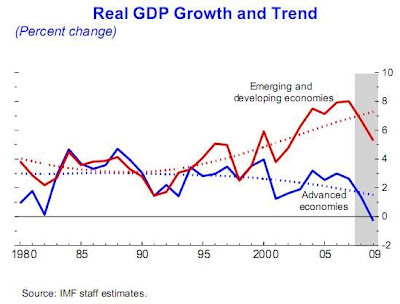 Who will suffer the most? According to the WEO update, commodity exporters (because commodity price projects have been marked down), countries with acute external financing and liquidity problems.

In the face of worsening financial and economic conditions, markets are pricing in expectations of much higher corporate default rates, as well as higher losses on securities and loans, in part, because pressures have now broadened to emerging markets, raising recapitalization needs. Thus, financial conditions are likely to remain tight for a longer period and to be more impervious to policy measures than previously expected.

It also hints the ineffectiveness of monetary policy as interest rates are already close to zero. What’s next? Keynesianism…and fiscal stimulus!

…However, monetary policy may not be enough because monetary easing may be less effective in the face of difficult financial conditions and deleveraging. Also, in some cases room for further easing is limited as policy rates are already close to zero bound. There are condition where broad-based fiscal stimulus is likely to be warranted. Fiscal stimulus can be effective if it is well targeted, supported by accommodative monetary policy, and implemented in countries that have fiscal space.

Posted by Chandan Sapkota at 5:10 AM No comments: