Australia went early and hard with a substantial cash handout to households in December 2008, followed by another round of cash stimulus delivered a month or two ago, and then a large-scale infrastructure program. The national accounts for the March quarter (which should include the effects of the first round of stimulus) have just come out, and show growth of 0.4 per cent, compared to a 0.6 per cent contraction in the December 2008 quarter

The main focus of fiscal stimulus should be on the expenditure side, particularly infrastructure and social spending given pressing needs, as reducing tax rates may be inequitable and the scope for doing so is limited given low revenue ratios. Other countries will have to adjust, in a way that will not affect critical spending. Additional donor support would reduce the need for adjustment. In all cases, countries should give priority to expanding social safety nets as needed to cushion the impact of the crisis on the poor.

And, this is very interesting-- The Phillips machine: Using water to predict the economy 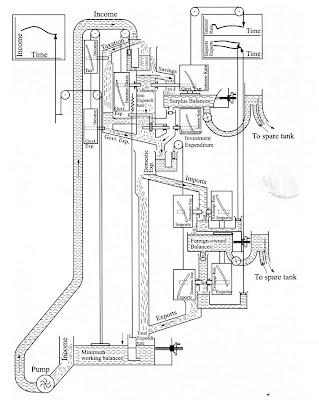 Posted by Chandan Sapkota at 3:23 AM No comments: