Listening to the Poor: Voices from the Bottom Up

The WB has released a new book (Moving out of Poverty: Success from the Bottom Up), which contains findings from a study carried out in 15 countries and interview with 60,000 people, about poverty reduction. I am surprised why Nepal was not included in the list of countries from where “voices of the poor” were collected because Nepal is one of the poorest countries in Asia and 18th poorest in the world (in terms of GDP (PPP) per capita figure from the IMF). The report does not even mention the word Nepal. It looks like a follow up to the Voices of the Poor report, which incorporated voices of 60,000 people from 60 countries, published in 2000.

One of the main findings of the report is that when researchers asked respondents about how they can move out of poverty, almost all of them underscored “individual effort, self-reliance and initiative”. This is not new but still I can’t exactly figure out what this really means (or what the authors really meant by this).

I think it misses to mention an important assumption: ‘provided necessary tools such as credit, relevant infrastructure, healthcare, market access, education, and technology among others, individual effort, self-reliance and initiative could lead poor people out of poverty.’ I think the initiative factor (coming out of agents) and the necessary conditions (usually provided by external agents/exogenous factors) are complementary and have to be synchronize in order to get the biggest bang from a poverty reduction initiative.

… the focus of poverty reduction strategies must therefore shift to increasing economic, social and political opportunities in the local communities where the poor live. These local opportunities include the provision of business know-how, basic access to health and education and the improvement of local governance. Local governments that are responsive and accountable have a critical role in creating the local conditions for households to escape poverty.

One can also get a test of the love with ‘liberalization mindset’ in the report. The report recommends “poverty reduction efforts need a liberalization from below” that includes removing restrictive government regulations, expanding access to markets (especially by providing connectivity through roads bridges and telephones), and integrating poor people’s businesses on fairer terms in new business models”. Nothing new and surprising about these recommendations but still I would be interested in seeing policy experiments that validate these claims.

What I don’t understand is, despite knowing (and having a feel about) these solutions for a long time, why were/are not the development agencies and the aid industry synchronizing their initiatives to tackle the problems head on? It kind of baffles me more than anything else because the poverty reduction strategies we study in school are not in line with the actions of most of the development and aid agencies that are making high pitch noises voices about poverty alleviation for the last four decades.

That being said, the report is useful in knowing what the poor people (as opposed to experts from development agencies and development models) actually say about their condition of life. It also discusses the concept of poverty and how it has evolved over the years.

Self-initiative is considered is the most important factor for moving out of poverty. 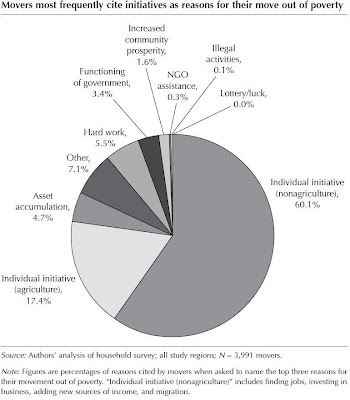 Here is a generalized diagram of how to move out of poverty: 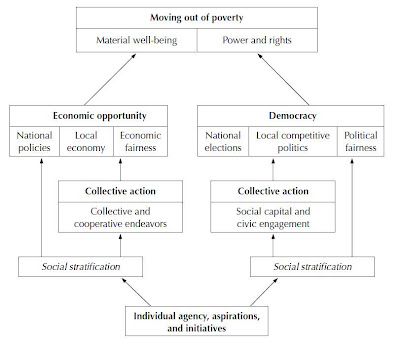 Posted by Chandan Sapkota at 3:51 PM No comments:

The country is using its nearly $600 billion economic stimulus package to make its companies better able to compete in markets at home and abroad, to retrain migrant workers on an immense scale and to rapidly expand subsidies for research and development.

Construction has already begun on new highways and rail lines that are likely to permanently reduce transportation costs.

And while American leaders struggle to revive lending — in the latest effort with a $15 billion program to help small businesses — Chinese banks lent more in the last three months than in the preceding 12 months.

China’s huge training programs may also help preserve social stability by keeping the unemployed off the streets, although Chinese officials deny that is their intention.

Posted by Chandan Sapkota at 3:35 PM No comments:

This kind of story scares me when it happens in developing countries, which severely lack manpower and firepower to deal with issues like  fires, wildfires and increasing accumulation of clouds above the skies of major cities, leading to rise in temperature.

According to this news piece, two major national parks in Nepal are burning creating Asian Brown Cloud (whatever that means!) over Kathmandu and other cities. This is compounded by increasing smoke emission from motor vehicle, factories, and cooking gas.

According to a NASA report today, there was a reduction of solar radiation to the surface by as much as 15 per cent in Kathmandu. Thirty-seven domestic flights were delayed due to poor visibility caused by hazy weather on Sunday.

A weatherman also blamed the dust particles passing through the northern Indian and Pakistani cities coupled with thick wildfire smoke for the ABC. Apart from Kathmandu, Biratnagar, Pokhara, Dhangadhi and Bhairahawa have also been affected by the ABC, which is concentrated three km above the earth’s surface and can travel halfway around the globe in less than a week.

Can the aid agencies and climate change advocates do something about this? Oh well, who cares about the change going on above in the skies over Nepal. I have not heard of any such international effort to tackle such issues happening in real time in Nepal, at least not since the time I became aware of these issues!

Posted by Chandan Sapkota at 7:20 AM No comments: