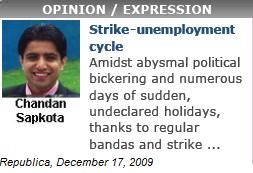 Why I think the militant youth wings, unions and politically motivated disruptive activities in and around industrial complexes and manufacturing plants are creating more unemployment, which is feeding more of such destructive activities, more closure of firms, more unemployment … the process is developing like a vicious strike-unemployment cycle in Nepal. Read the op-ed here for more discussion.

Amidst abysmal political bickering and numerous days of sudden, undeclared holidays, thanks to regular bandas and strikes, the country has lost track of economic activities that provide jobs and contributes revenue to the government. The political leaders hardly show interest in economic issues that foster jobs creation, increase investment, and absorb the increasing number of youths and migrants into the workforce. Unsurprisingly, due to poor appropriability, the inability of investors to retain returns on investment, investors have lost faith in the economy.

Why is there stalemate on new investment and winding down of existing economic activities, leading to loss of jobs and revenues? The answer is a no-brainer: Labor militancy and strikes, whose causes transcend economic reasoning and ground reality in the industrial sector. Forcefully shutting down production and operational activities has been the most popular form of industrial strikes. This is probably the prime cause of industrial decline in Nepal. What the politically affiliated militant labor unions and youth wings do not realize is that the more they engage in such disruptive activities, the greater would be the probability of them being laid off ultimately.

This is how it works. Labor unions devise ridiculous demand and pressure firms to fulfill them. In most cases, the management would not want to yield to unjustified union demands on wage, bonuses, and employment status. The unions forcefully shut down production. The firms lose income and profits, and pay less revenue to the government. After profits nosedive to negative domain, the management shuts down factories and lays off workers. Thus, beings the demise of productive and efficient industries!

At the end of the day, the workers lose the most. Due to freeze in hiring in the industrial sector, the laid off workers won’t find new jobs. Additionally, the government, having lost a major source of revenue, cannot employ laid off workers in public sector. The unemployed, idle workers resort to strikes of various forms, disrupting production of existing firms. This further scares away investment from the economy. Slowly, firms begin to stop production. More unemployment and idle workers, more strikes and disruptive activities. The process develops as a vicious strike-unemployment cycle.

The political instability and labor union militancy in the industrial sector have chased away multinational companies that have been providing hundreds of jobs and supporting numerous households. The Maoist-affiliated labor unions, through their idiotic demands, chased away Colgate Palmolive, a multinational company, from Nepal. Now, they have stopped Varun Beverage Nepal Ltd, the bottler of Pepsi, from operation and expansion. Worse, the company said that it is not making further investments worth around Rs 1 billion. This has deprived labors from securing potential new jobs. At a time when the country needs more foreign investment, the drama led by the Maoist-affiliated trade unions and militant youth wings is further scaring away not only existing companies but also potential ones. Their activity is already contributing to the demise of the garment and textile industry, once the main component of Nepali exports. Unjustified demand for wage increase and insistence for permanent employment status disrupted production at a time when the industry was losing markets abroad.

Recently, the Maoist-aligned All Nepal Trade Union Federation (Revolutionary) put forward preposterous demand of increasing salary by 40 percent and dearness allowance by 100 percent. Note that the previous Maoist government had already increased minimum salary in consultation with the private sector. Now, after revision of salary, the unions are again demanding an increase in wages, which will do nothing but increase cost of production. One of the most ludicrous things about the trade union’s demand is that they want an increase in wages irrespective of worker’s qualification, productivity, and efficiency. In general, wages are paid on the basis of marginal productivity of labor. However, in our case, wages are determined not by labor’s productivity but by how violently the unions can put pressure on the board of directors. Furthermore, the unions want workers to be given permanent, life-long employment status without even considering their productivity and longevity of firms they are working in. This runs contrary to all the economic logics associated with labor and wages. Also, how can dearness allowance increase by 100 percent when general prices have not even increased at the same rate?

Add to this the war on private property waged, again, by the Maoist-affiliated sister organizations. The infamous land grab incidents and occupation of various industrial complexes by YCL have further scared investors. They are building their own enterprise out of the profits gained from such unlawful, disruptive activities. There is no stability in contract enforcement and upholding of property rights, one of the most important factors required for a sustained economic growth.

Not surprisingly, these incidents are also reflected on key international reports like Doing Business Reports and Global Competitiveness Reports, which are looked upon by investors before considering investment. Nepal ranks 123 among 183 countries in terms of ease of doing business. Hiring and firing regulations are the most investment-unfriendly in South Asia. In terms of competitiveness of the economy, Nepal ranks 125 out of 133. The standing in labor market efficiency is 122 out of 133 countries.

Investors have lost faith in the Nepali economy not because there is no potential business opportunities but because there is no guarantee of property rights, stability of policy reform, and business-friendly labor laws and regulations, among others. Maoist leader Baburam Bhattarai knows how hard it is to coax investors to invest in the economy. He spent the last few months of his stint as finance minister trying to convince domestic and foreign investors to invest in Nepal. He failed! It will take years to convince potential investors to invest in the economy where instability prevails and unions rule the industrial sector.

If you have lost a job, are potentially going to lose, or cannot get one in the market, then blame the outrageous, militant youth wings and the politicians who incite the unions to go on a destructive path. By corollary, if you are getting poorer each day, due to loss of purchasing power triggered by loss of jobs, blame the youth wings and their dirty drama staged in and around industrial complexes! 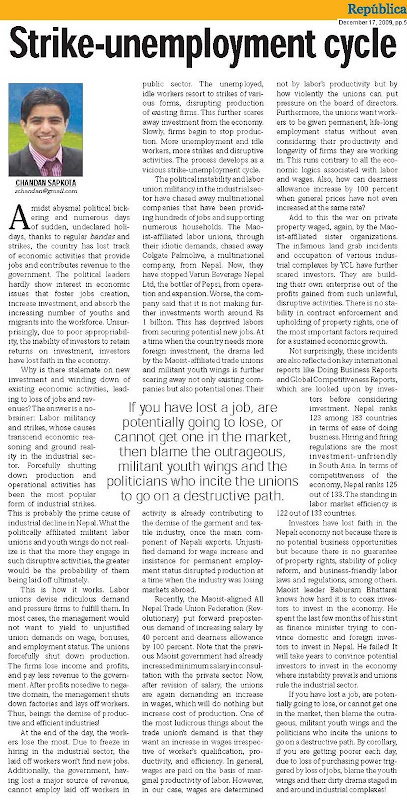 Posted by Chandan Sapkota at 1:26 AM No comments: