The estimates in a new book (Asia in 2050) by the ADB shows that if Asia continues on its recent trajectory it would double its share of global GDP to 52% by 2050 and regain its dominant economic position it held in the 1700s. The rise, fall and rise of Asia is depicted in figure 1 by the U-shaped GDP (share of global GDP). Specifically, it is like the shape of a marginal cost curve.

But, it warns that “Asia’s continued rise is plausible, but by no means pre-ordained”. China, India, Viet Nam, and Indonesia could fall victim to the “middle-income trap”—as countries grow rapidly they are unable to compete with low-income, low-wage economies in manufactured exports and advanced economies in high-skill innovations. It basically means that countries fail to make a timely transition from resource-drive growth, with low-cost labor and capital, to productivity-drive growth. South Korea avoided this trap, but Brazil and South Africa could not, says the report. 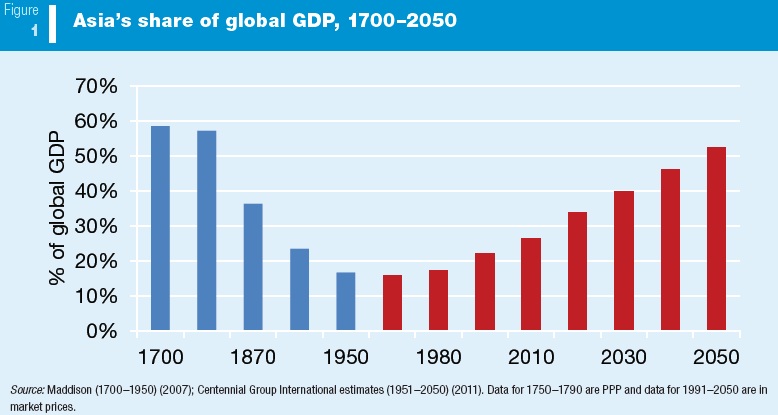 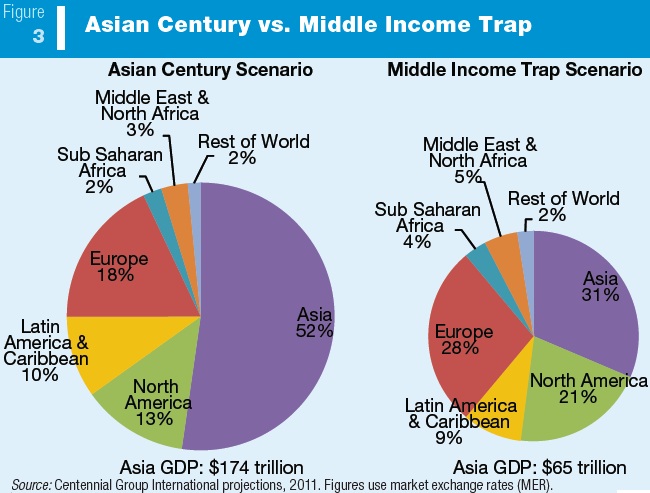 In May 2011, the ADB came out with an earlier version of the same report/book. Then, it argued that Asia’s GDP under Asian Century scenario and Middle Income Trade scenario would be $148 trillion and $61 trillion in 2050. Have to find out what led to the discrepancy in estimates in two months period.  Below is how the report identified per capita GDP in South Asia.

Posted by Chandan Sapkota at 2:38 PM No comments:

Nepal’s exports are decreasing due to loss of competitiveness engendered among others by power shortage, labor dispute, lack of investment, inadequate supply of infrastructure, policy unpredictability, and other supply-side constraints. The declining exports revenue and ballooning imports is leading to an ever-widening trade deficit, which is not only draining out foreign exchange reserves but also impacting balance of payments. The situation has gotten so worse that our exports revenue, which is around 15 percent of GDP, is barely enough to finance petroleum imports. Worse, foreign direct investment (FDI) inflow has been stagnant at US$ 39 million for two years now and FDI commitment has declined by almost 40 percent.

Right now, with the assistance of donors, both bilateral and multilateral, a number of initiatives are implemented with an objective to boost exports in line with the recommendations of Nepal Trade Integration Strategy (NTIS). Since these initiatives are run amidst the existing constraints mentioned above, the ultimate impact on exports will be minimal, if any, in the short term. To increase export competitiveness, export revenue, and FDI, an immediate enactment of Special Economic Zone (SEZ) Act is a must. This is even more necessary to revitalize the ailing manufacturing sector. Unfortunately, despite a well-prepared SEZ bill ready to be presented to the parliament for discussion and enactment, no political leaders have shown genuine interest in pushing it through for the benefit of the struggling exports sector.

The exports success in China, East Asia, Latin America, and our regional partners such as India, Pakistan, and Bangladesh are partly attributed to the enactment of SEZs—where industrial and labor laws are more liberal than in the whole economy; infrastructure requirements such as road, power and communication are adequately supplied; security is guaranteed; and firms are given income and tax incentives to locate plants inside the zone. The primary objectives of a SEZ is to enhance industry competitiveness, attract FDI, boost exports and diversify exports basket while maintaining protective barriers to create jobs and stimulate economic activities.

A 2008 World Bank study estimated that there are 2301 SEZs in 119 developing and transition economies (clustered mainly in Asia and the Pacific and Latin America), accounting for about 69 million direct jobs and over US$ 200 billion in gross exports per annum. In Bangladesh, Pakistan and Sri Lanka, over 75 percent, 50 percent and 67 percent respectively of manufacture exports originate from SEZs. The success of Bangladeshi garment industry at a time when the corresponding Nepali industry is dying is attributed to the enactment of SEZs. The Chittagong Export Processing Zone is considered to be third most competitive SEZ in the world. At present, there are over 133 and 8 operational SEZs (with several more planned) in India and Bangladesh respectively. While our neighbors and competitors in the international market are actively pursuing every means available to incentivize industries to locate inside SEZs, entice FDI, and boost exports, our political leaders are not even showing interest in debating in the parliament the already prepared SEZ bill.

Typically most of the industries in SEZs are labor intensive and assembly-oriented activities, including light manufacture goods such as textiles, apparel, leather, and light electrical and electronic goods. Sector specific zones such as Agriculture and Herbs Processing Zone, Export Processing Zone, and Garment Processing Zone inside SEZs are established to boost exports of and investment in particular sectors.

There are numerous advantages of having SEZs in a least developed country like ours which is losing competitiveness and manufacturing base. First, infrastructure facilities, tax incentives and subsidies provided to industries that locate inside the zones will help boost their competitiveness, which in turn will aid our struggling exports sector, generate revenue and diversify exports. Second, due to policy certainty and economic incentives, multinational companies will come and bring in investment and technology with them. This will help to not only spur economic activities but also increase employment. Third, in most of the manufacture -oriented zones, a large chunk of employment is secured by women, accounting for almost 60-70 percent of total employed workforce in such zones worldwide. Empowering women via gainful employment will be much more effective than the shallow talk on women empowerment and inclusiveness at the political level.

Fourth, ancillary firms and local suppliers of raw materials, which are needed for industries in such zones, will emerge when entrepreneurs see a stable market inside the country. It will not only help in stimulating local economies but also accelerate backward supply linkages and dissemination of technology, leading to increase in productivity. Fifth, there will be economies of scale, which means decrease in average cost of production as output increases, when similar or near-similar industries operate in the same place, resulting in cost competitiveness of our products. Sixth, most of the firms in Nepal are operating below their capacity, leading to low production and productivity. With the supply of infrastructure guaranteed inside SEZs, these firms will be able to operate at full capacity. They will not only export items to contribute foreign exchange reserves, but also sell items in the domestic market, which is flooded with imported goods, by paying appropriate local taxes.

None of these benefits are in any way against our national interest, at least when viewed in terms of stimulating growth, employment and poverty reduction. There is no reason why our political leaders should not do the necessary for the enactment of SEZ Act. Specifically, the Minister for Commerce and Supplies and the Minister for Industry should personally push for the enactment of this Act by amending few provisions in the existing SEZ bill. These include, among others, lowering mandatory export requirement of 75 percent of total production for companies inside SEZs and a more flexible and industry-friendly labor law regime, which as of now includes fixing wages and welfare based on ‘agreement between industry and employee’.

The enactment of SEZ bill will help to realize the objectives of Trade Policy 2009 and Industrial Policy 2010, and in the effective implementation of NTIS, which identified 19 products having export potentials. Currently the government has proposed establishing SEZs in Bhairawa, Panchkhaal, Simara, Dhangadhi Jhapa, Kapilvastu, Jumla and Biratnagar. The International Finance Corporation (IFC) recommended SEZs in Simara and Biratnagar as being the most feasible ones. The construction of SEZ in Bhairawa is expected to be completed by the end of this fiscal year. The delay in enacting SEZ Act will negatively impact investment plans by companies considering locating plants inside the zone.

For a long time now, finance ministers, including FM Bharat Mohan Adhikari, have been regularly mentioning about SEZs in their budget speeches, but without concrete effort later on to push for the enactment of the Act. For the sake of the struggling exports and manufacturing sectors and for national interest, the political parties should at least leave aside partisan differences over political issues and collectively endorse SEZ Act, and also create enabling environment for operation of such zones. This is the surest and best way to revive our exports and manufacturing sectors for now.

Posted by Chandan Sapkota at 10:23 AM No comments: