Trade in South Asia: So open yet so closed

South Asia has opened its door to the rest of the world but it remains closed to its neighbors. Poor market integration, weak connectivity, and a history of friction and conflict have resulted in two South Asias. The first South Asia is dynamic, growing rapidly, highly urbanized, and is benefiting from global integration. The second South Asia is rural, land locked, full of poverty, and lagging.

SAARC is probably the least integrated regional blocs in the world. Moreover, SAFTA, the proposed free trade bloc, has not made any headway despite years of talks. It is a market of more than 1.3 billion people and an emerging one with increasing purchasing power. All talks on SAFTA or any regional development initiatives are clouded by off-and-on dispute between India and Pakistan. 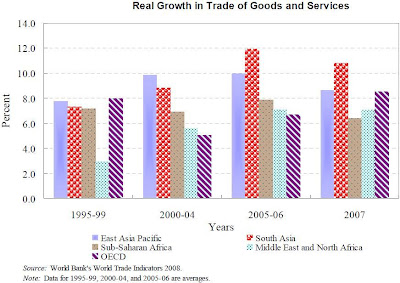 Posted by Chandan Sapkota at 7:17 PM No comments: