Dani Rodrik, professor of international political economy at Harvard, says Dixit was the best classroom teacher he ever had—he never treated anything as silly or obvious. “No matter how stupid a question seemed, he would stop, raise his hand to his chin, narrow his eyes, and think a long time about it, while the rest of us in the classroom would roll our eyes at the stupidity of the questioner,” said Rodrik. “Then he would say, “Ah, I see what you have in mind . . . ,” and he would roll out an answer to a deep and interesting question the student had no idea he had asked.”

“What makes him special,” says former student Kala Krishna, now an economics professor at Penn State, “is that more than anyone else I know, he sees economics as an inescapable part of life: from books, movies, negotiating with a taxi driver—everything has economic content. He truly loves economics, and you can see how much he is enjoying himself doing it.”

Others praise his wit. “Avinash Dixit is one of my favorite economists, in part because he has a trait that is extremely rare among economists: a good sense of humor,” said Steven D. Levitt, coauthor of the best-selling book Freakonomics.

[…] What became known as the “Dixit-Stiglitz” model underpins a huge body of economic theory on international trade, economic growth, and economic geography—a model tapped by Paul Krugman, who won the Nobel Prize in 2008.

The model, first published in 1977, became a building block for others in the new fields of endogenous growth theory and regional and urban economics—what journalist David Warsh described as “one of those economical and easy-to-use ‘Volkswagen’ models that were the hallmark of MIT”.

[…] Apart from game theory and his eponymous model, Dixit is known for seminal work on microeconomic theory, international trade and growth, and development. But his varied interests have moved him to write extensively about governance, the role of institutions, law, and democracy in development, and political polarization. He says his most cited work is Investment under Uncertainty, written in 1994 with Robert Pindyck of MIT, about how firms make investment choices.

That book points out the inherent irreversibility of most business investment decisions. Dixit and Pindyck suggest a way to deal with the risks posed by irreversibility: wait before acting. Waiting is valuable because with time comes additional information whose value would be lost had the irreversible decision already been made.

Dixit has advocated the same approach in other fields, and it is at the heart of a paper based on an episode of the popular TV show Seinfeld, in which a young woman must make decisions about using her finite supply of contraceptive sponges.

[…] While Dixit acknowledges the importance of democracy, property rights, contract enforcement, and the provision of public infrastructure and services that support private economic activity, he is scathing about attempts to draw up a menu of items that underpin development in low-income countries.

“There’s a long, long tradition of people offering recipes which don’t work out,” he says. He stirred things up with a lecture at the World Bank in 2005 that he said he hoped would be provocative and critical, but “evenhandedly so.”

In many cases, he argued in that lecture, the accumulated research on the role of institutions in development stopped short of giving useful or reliable policy prescriptions. “I hope to give everyone some incentives to think further and harder.”

In a subsequent talk at the Reserve Bank of India, he said that in general “bottom-up and organically generated reforms will work better than imposed top-down ones.”

[…] “Going forward, I think some of the most fruitful research will come from a better integration of financial theory and macroeconomic theory. It may be supplemented by better recognition of rare major events, something that already exists in financial theory, but is less assimilated into financial practice than it should be.

“But the real fault was not so much in economic theory as, if you like, in the political and business world, where people actually swallowed some of the simplistic views about the wonder of markets too much without recognizing the hundreds of qualifications that Adam Smith and a number of others have told us about, and we should all have known about.”

Posted by Chandan Sapkota at 5:47 PM No comments:

Sources of revenue in the Nepali economy 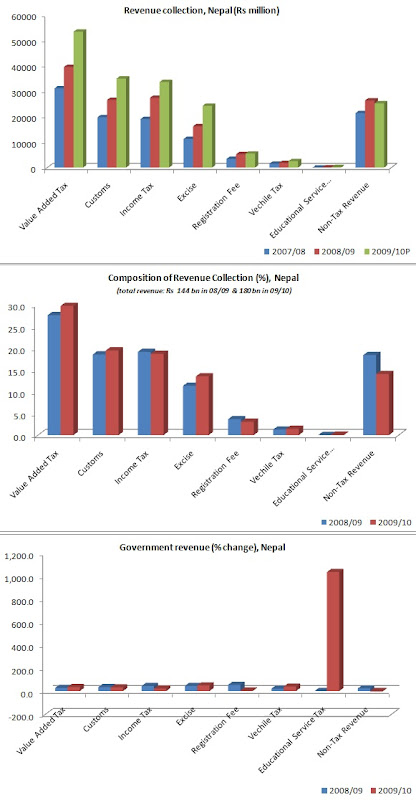