Third highest remittance inflows (% of GDP) to Nepal in 2013

According to the latest Migration and Development Brief (No.24), official remittance inflows to Nepal reached 28.8% of GDP in 2013, which makes Nepal the third largest remittance recipient in the world. Migrants remitted an estimated US$5.9 billion to Nepal in 2014. The amount of remittance outflows was just US$28 million in 2013. In 2012 as well Nepal was the third highest recipient of remittances (which includes workers' remittances, compensation of employees, and migrant transfers). More on remittances in Nepal here and here. 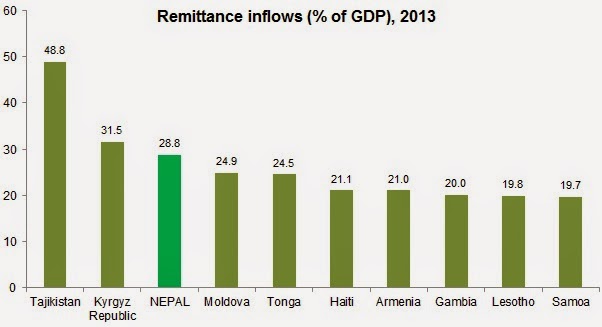 South-South migration was 37% of total global migrant stock (247 million) and South-South remittances accounted for 34% of global remittance flows. The top five migrant destination countries are the US, Saudi Arabia, Germany, the Russian Federation and the UAE.

The uneven recovery in developed countries, lower oil prices and economic troubles in Russia, tighter immigration controls, and forced migration and internal displacement due to conflicts impacted remittance flows in 2014. The fall in oil prices did not affect remittance from Gulf Cooperation Council (GCC) members, especially to South Asian economies in 2014. Remittances could fall if oil prices stays low for extended period. 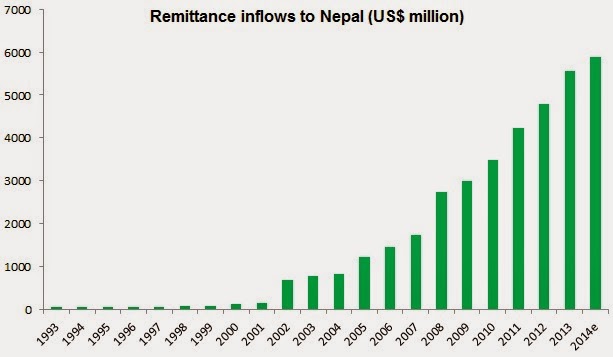 Posted by Chandan Sapkota at 9:47 PM No comments: