Indian economic growth estimated to decelerate to 6.5% in FY2018

India’s Central Statistics Office has released first advanced estimates of national income for 2017-18 (FY2018) and the economic outlook doesn’t look good. GVA (at basic prices) in FY2018 is estimated to decelerate to 6.1% from a provisional estimate of 6.6%. This follows Q1FY2018 GVA growth of 5.6% followed by 6.1% in the following quarter. The effects of demonetization in November 2016 is still lingering and the hasty introduction of GST in July 2017 is affecting small and medium enterprises (although effect of both shocks/reforms are gradually tapering off). GDP is estimated to grow at 6.5%, down from 7.1% PE for FY2017. 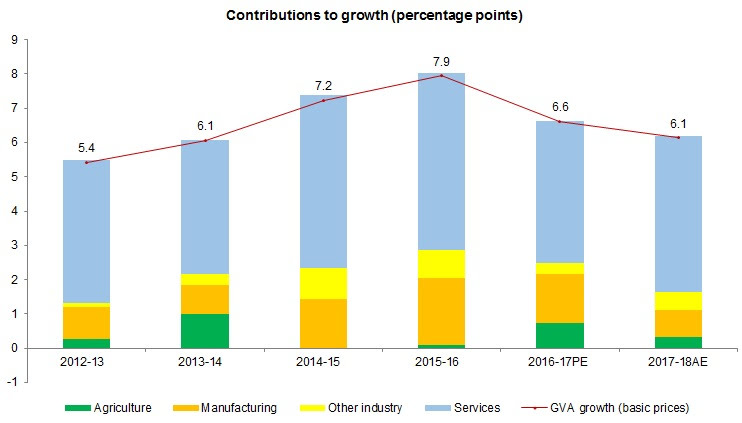 Specifically, on the supply side, agricultural and industrial sectors are expected to grow at slower rates than in FY2017. Agricultural output is expected to grow at just 2.1%, down from 4.3% in FY2017, due to decrease in production of Kharif crops (monsoon crops such as rice, millet, maize, sugarcane, soyabean, etc) cauased by deficient and uneven pattern of south-west monsoon. Industrial output is estimated to decelerate to 4.4% from 5.6% in FY2017 due to the decline in manufacturing output (growth of 4.6% from 7.9% in FY2107). This is where the effects of demonetization and the uncertainty surrounding roll out of GST and its implementation are still affecting economic activities. Services output is estimated to grow at 8.3%, up from 7.7% in FY2017 thanks to expected improved performance of trading activities, hotels and restaurants, real estate and business activities. Overall, agriculture, industry and services sectors are estimated to contribute 0.3, 1.3 and 4.5 percentage points to GVA growth of 6.1% in FY2018. 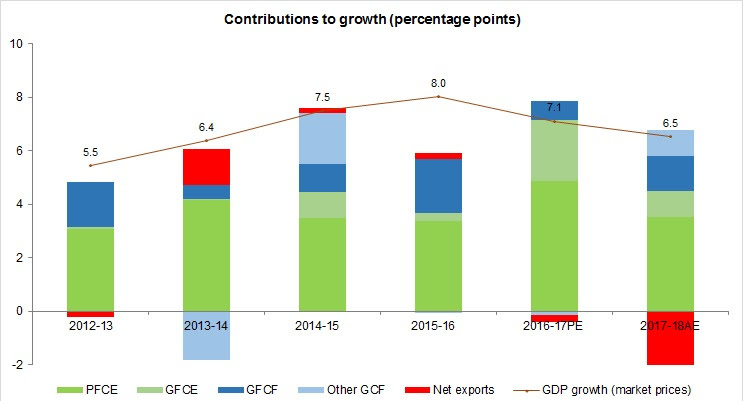 On the expenditure side, both private and public consumption are estimated to slowdown, but gross fixed capital formation is expected to grow at 4.5% (up from 1.7% in FY2017 but lower than 6.5% in FY2016). Exports growth is estimated to remain stable but a double-digit import growth will worsen net exports.

Two observations: First, demonetization and GST are structural reforms whose payoff will be realized in the long term, but voters care about short-term and general elections are coming soon. Its lingering impact is going to been felt in the next few quarters too. Second, the government will face pressure to bring some form of immediate growth-enhancing fiscal measures in the budget for FY2018-19 (due in February).
Posted by Chandan Sapkota at 7:52 PM 1 comment: