This a part of a series of analysis on growth diagnostics of the Nepalese economy. For an earlier post on GDP growth rate in Nepal, see this blog post. For discussion of a set of constraints on economic activity in Nepal see this post.

The only period when growth accelerated for two consecutive years is between 1967 and 1969. Besides this and an instance of growth stagnation at 2% between 1961 and 1963, the economy experienced a proportional growth decline for every growth increase, implying that the increase is a mere attempt of recovery from a fall in previous period. In sum, the Nepali economy can be seen as one marked by sustained growth failure in the past five decades. This is reflected in similar rocky trend in growth rate of GDP per capita in the past five decades (see Figure 2). 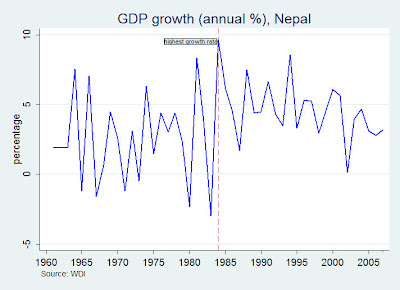 The medium and long term growth rates[1] have fluctuated between 2.5% to 5.2%. The average growth rate was 2.52% during 1961-1970, 2.11% during 1971-1980, and 4.75% during 1981-1990, which was the most prosperous decade so far. Note that this happened before Nepal adopted an open economic policy. The country implemented a new industrial policy in 1992, thus engaging in liberalization, privatization and deregulation of many sectors, following the popular dictates of the Washington Consensus[2]. Accordingly, GDP growth rate increased to 5.26% during 1991-1995. This period also saw relatively low variation in GDP growth rate fluctuation.

It is argued that Nepal’s economy in the 1990s had a poor growth performance despite reasonable macroeconomic stability because of a lack of good governance and political instability(Khatiwada & Sharma, 2002). The Maoist insurgency started in 1996 and began to take a toll on foreign and domestic investments (more in detail later). The successive governments were unable to fully spend allocated development expenditure. Meanwhile, recurrent and general expenditure hiked, leaving little impact on economic growth. During 1991-1996, the growth rate was 5.26%. This decreased to 4.03% during 1996-2006. The growth rate in 2007 was 3.2%. 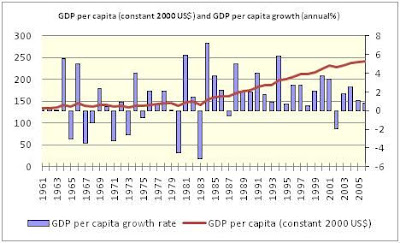 In short, the economic growth has been very at a low level as compared to its neighbors and countries having similar income per capita (see Figure 4). The economy had more number of growth collapses than recoveries in the past five decades. 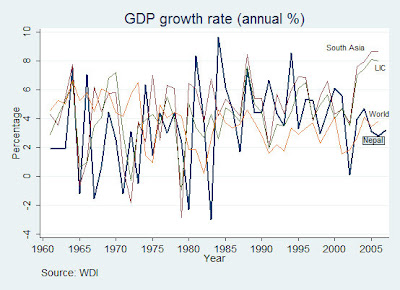 It is tempting to argue that the tremendous volatility in growth rates in Nepal might be caused by tumultuous political situation and frequent instances of coups and fleeting democracy. However, as is seen in Figure 5, government changes and coups had little impact on the trend of overall growth rate. The trend in Polity2 index[3] is inconsistent with the trend in growth collapses and recoveries. 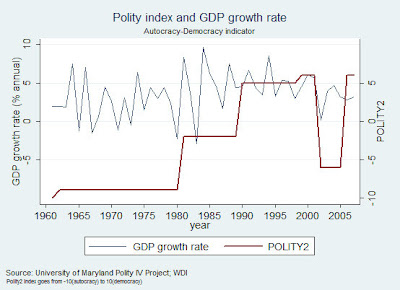 Nepal was under the autocratic Panchayat structure beginning 1962, the year when the then King Mahendra usurped political power and outlawed political activity. This continued until 1980, when the next King Birendra loosened restrictions on political activity in the country. This can be seen on Figure 5 as a flat -9 (autocracy) and then an improvement by seven points to -2. After a general revolution, a multi-party system of governance was instituted in 1990. This is reflected in the Polity2 index as an improvement with an index value of 5. Though there were frequent changes in government, it did not have a strong effect on the overall index until 2001, the year when King Birendra, along with his family members, was murdered during the Royal Palace massacre. After 2001, King Gyanendra assumed the throne and staged a coup in 2002. A revolution led by major political parties overthrew the King and abolished monarchy system in 2006.

As shown in Figure 5, the Polity2 index nosedived to -2 after the political upheaval in 2001. This is also the same year the Maoists militias, who launched an armed rebellion against the monarchy and “feudal” system in 1996, attacked an army base, thus marking a full-fledged civil war/conflict between the rebels and the state. The armed Maoists rebellion came to an end after the monarchy was abolished in 2006. This is the only time period (2001-2005) when the impact of political change is seen on GDP growth rate, which never crossed the 6.10% mark after 2000. Notice, that in all other periods except for 2001-2005, the change in political structure did not have any relation with the trend in GDP growth rate. As stated above, this implies that a frequent political change was not a strong constraint on medium and long term growth in Nepal.

This leads us to two questions: (i) what is constraining growth rate in Nepal? and (ii) what factor(s) are posing as strong constraint(s) on sustained growth rate? This is where we apply the growth diagnostics approach to figure out the most binding constraint(s) on economic activity in the Nepali economy.

[2] Nepal adopted a more liberal trade policy in 1992 with the objectives of: (i) enhancing the contribution of trade by promoting both internal and external trade with increased private sector participation, (ii) diversifying trade with the promotion of backward linkages, (ii) expanding trade on a sustained basis to reduce imbalance, and (iv) coordinating trade with other sectors. The current account was made fully convertible in 1993.

[3] Polity2 is a composite index that measures the quality of democracy in a country. It ranges from -10 (autocracy) to 10 (democracy). Specifically, score of -10 means hereditary monarchy, -10 to -6 means autocracies, -5 to 5 means anocracies (societies where central authority is weak or nonexistent), 6 to 10 means democracies, and 10 means consolidated democracy.

Posted by Chandan Sapkota at 2:17 PM No comments: