Further to the earlier blog post, here is an updated analysis of the recent weakening of the Nepali rupee.

The figure shows the daily nominal exchange rate between Nepali rupee and US dollar. The Nepali rupee, which is partially convertible, is consistently weakening against major global currencies especially after FY2011.

As mentioned earlier, the exchange rate would follow the movement of Indian rupee vis-à-vis the convertible currencies. The weakening of Indian rupee is caused by both internal and external factors. First, the slow economic performance along with the setback in passing investor friendly policy reforms/legislation have lowered investor’s confidence, resulting in weak capital inflows. This combined with the high current account deficit have led investors to sell off debt in the Indian market, which alternatively means less demand for Indian currency. Second, the rise in imports of petroleum products and gold (recently the Indian government even raised tariff on gold import to 8% from 6%) has led to high dollar demand in the Indian market, which also means less demand for Indian currency. Third, the continued slowdown and uncertainty (economic and sovereign debt) in the EU have meant that investors are still looking for safe place for investment, which traditionally is either gold or the US dollar. Hence, the demand for US dollar is going up. Fourth, investors are expecting the US Federal Reserve to curb its massive quantitative easing (QE) by the end of this year, prompting them to demand dollar well in advance in anticipation of tighter liquidity and high interest rate later on.

Some of these are recent phenomena and might change quickly (such as the perception about the Indian economy in response to investor friendly policy gestures), leading to fluctuations in exchange rate. But, some of these are persistent ones (such as the uncertainties surrounding recovery in the EU economies), leading to higher demand for dollar. While the latter strengthens the dollar and pushes it up each year, the former induces fluctuations at higher level. Hence, Nepali rupee (following the path of Indian rupee) is consistently depreciating as well as fluctuating at high level. Indian investors are anticipating IRS 60 per dollar soon, which could mean NRs 96 per dollar. But, it is contingent upon the factors discussed earlier.

Now, how would this impact Nepali economy?

First, a depreciating currency usually makes exports competitive, leading to rise in export earnings. Unfortunately, Nepal cannot take full advantage of this because of the high cost of production arising from power shortages, labor disputes (high minimum wage not commensurate with productivity compared to other South Asian economies), high import content of manufactured goods (thus driving up cost of raw materials as currency depreciates), and other structural bottlenecks as well as supply-side constraints (low quality human capital, low R&D, and strikes, among others). Furthermore, the weak EU and the US economies has meant a weaker demand for imports there (our exports) as well.

Second, it will affect imports and might worsen current account balance depending on the level of remittance inflows, which have registered a slower growth (both in dollar and rupee terms) thus far this fiscal year. For the same quantity of goods, everything else remaining constant, importers will have to pay more to purchase dollars to pay foreign suppliers. It will jack up imports bill. Usually, a depreciating currency would translate into weakening of import demand. But, since Nepal’s import is relatively price inelastic (i.e., change in quantity imported is less than the change in import price), there won’t be much impact (also petroleum fuel import is a major component of total import). Moreover, given the consumption behavior, which is hinged on remittances-backed imported goods and services, and the weak domestic production base, it is unlikely that imports will do down. That said, it might also increase tax revenue from imported goods.

Third, the rise in import bill will be reflected in the final prices of retails goods and services. Specifically, the rise in cost of petroleum imports will either lead to worsening of the already bad balance sheet of NOC or increase prices of petroleum fuel in the market, depending on whether the government opts for price rationalization or absorption of costs in terms of subsidy (its has implications on fiscal sustainability too!). It might then have spillover effects on transport and retail prices. Ultimately, it will mean inflation, which is above 10% so far this year, will further go up.

Fourth, there is an incentive to remit more money to Nepal when currency depreciates. We have seen this in FY2012 as well. It will positively impact financial sector liquidity and current account balance. A part of the marginal increase in cost of imported goods due to weakening currency would be offset (in terms of purchasing power) by the marginal increase in purchasing power due to higher remittance income (of course, it will be limited to remittance receiving 56% of households).

Fifth, entities such as NEA will have to make larger payments to companies— Bhote Koshi and Khimiti hydropower projects— with which it has power purchase agreement in dollars. It will worsen its already bad balance sheet. Furthermore, the country’s (foreign) debt service payment goes up when currency depreciates. 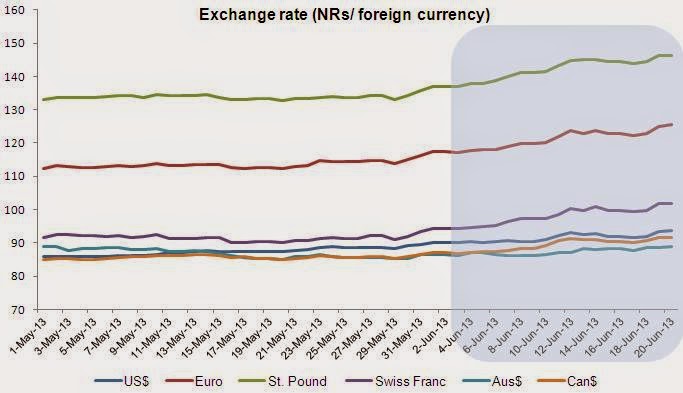 More on the exchange rate here.
Posted by Chandan Sapkota at 4:47 PM No comments: