This post is a summary of Amita Sharma's discussion paper (Rights-based legal guarantee as development policy), April 2010. I could not find a link to the full discussion paper but here is a presentation on the same. NREGA (they renamed it to Mahatma Gandhi National Rural Employment Guarantee Act [MGNREGA] this fiscal year) is doing a phenomenal job in rural India at a cost below one percent of GDP. Specifically, the cost was around 0.6 percent of GDP last year. The total number of employment provided to households was over 45 million. Here is major highlights of NREGA. Intro here.

How the districts under different phases were selected?

Districts under phase I, II, and III were 200, 130, and 285 respectively. Mahatma Gandhi NREGA was implemented in phase I districts on February 2, 2006, phase II on April 2007, and phase III on April 1, 2008. The phase implementation was based on a criterion of backwardness, which included a mix of demographic, social and economic indices, formulated by the NPC.  This ranking was used to select 150 districts for the National Food for Work Programme (NFFWP) launched in 2004. However, the districts selected for phase I were not selected serially but to represent all states under NREGA. The districts chosen for phase I were dominantly tribal, low productivity districts, among which almost 50 percent are designated as Drought Prone Areas Programme (DPAP). 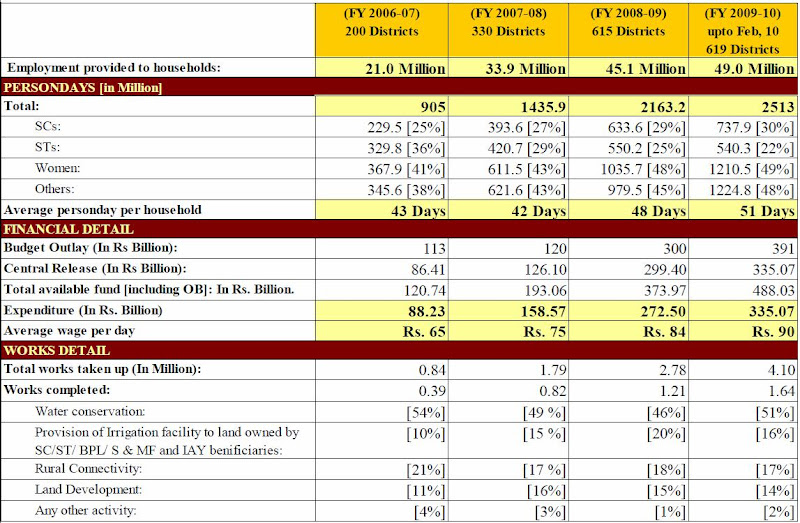 Early trends and outcomes
Posted by Chandan Sapkota at 10:16 AM No comments: