The Economist seeks a new definition of recession:

To the average person, a large rise in unemployment means a recession. By contrast, the economists’ rule that a recession is defined by two consecutive quarters of falling GDP is silly. If an economy grows by 2% in one quarter and then contracts by 0.5% in each of the next two quarters, it is deemed to be in recession. But if GDP contracts by 2% in one quarter, rises by 0.5% in the next, then falls by 2% in the third, it escapes, even though the economy is obviously weaker. In fact, America’s GDP did not decline for two consecutive quarters during the 2001 recession.

However, it is not just the “two-quarter” rule that is flawed; GDP figures themselves can be misleading. The first problem is that they are subject to large revisions. An analysis by Kevin Daly, an economist at Goldman Sachs, finds that since 1999, America’s quarterly GDP growth has on average been revised down by an annualised 0.4 percentage points between the first and final estimates. In contrast, figures in the euro area and Britain have been revised up by an average of 0.5 percentage points. Indeed, there is good reason to believe that America’s recent growth will be revised down. An alternative measure, gross domestic income (GDI), should, in theory, be identical to GDP. Yet real GDI has risen by a mere 0.1% since the third quarter of 2007, well below the 1% gain in GDP. A study by economists at the Federal Reserve found that GDI is often more reliable than GDP in spotting the start of a recession.

Forget about the horrors associated with the "R" word. Read this joke and laugh (or at least, try to laugh):

Posted by Chandan Sapkota at 11:37 AM No comments:

Stiglitz on the Wall Sts meltdown

The present financial crisis springs from a catastrophic collapse in confidence. The banks were laying huge bets with each other over loans and assets. Complex transactions were designed to move risk and disguise the sliding value of assets. In this game there are winners and losers. And it's not a zero-sum game, it's a negative-sum game: as people wake up to the smoke and mirrors in the financial system, as people grow averse to risk, losses occur; the market as a whole plummets and everyone loses.

Financial markets hinge on trust, and that trust has eroded. Lehman's collapse marks at the very least a powerful symbol of a new low in confidence, and the reverberations will continue.

We had become accustomed to the hypocrisy. The banks reject any suggestion they should face regulation, rebuff any move towards anti-trust measures - yet when trouble strikes, all of a sudden they demand state intervention: they must be bailed out; they are too big, too important to be allowed to fail.

Eventually, however, we were always going to learn how big the safety net was. And a sign of the limits of the US Federal Reserve and treasury's willingness to rescue comes with the collapse of the investment bank Lehman Brothers, one of the most famous Wall Street names.

Posted by Chandan Sapkota at 6:58 AM No comments:

I was thinking of blogging on this topic earlier but was unable to find a balanced analysis of the causes behind the tragedy. The political leaders were busy in blame game while villages after villages both in Nepal and India, were being overwhelmed by the Kosi river. Some attribute the flooding, which killed hundreds of people and left millions homeless and forced people to shift to high altitudes, to natural factors. But, Gywali argues that this was a man-made tragedy; it is a product of poor planning and corruption. 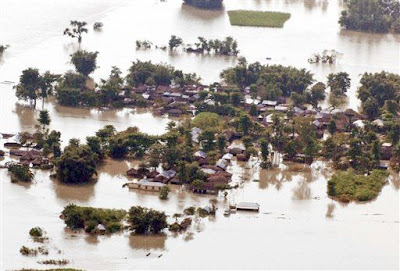 The Kosi acts as a massive conveyor belt taking sediment from the Himalaya to the Bay of Bengal. Some one hundred million cubic meters of gravel, sand and mud flow out of the Chatara gorge in mountainous Nepal every year. This flow cannot be blamed on deforestation: we have more forest cover in the Kosi catchment today than ever before. It is caused by Himalayan geotectonics coupled with the monsoon regime. As the river slows down in the flat plains beyond, it deposits its sediment, filling up the river's main channel until it overflows and begins a new course. This natural process produced the large inland delta that lies across southern Nepal and the Indian state of Bihar.

But, for the last half century, the 'Kosi Project' has used embankments to restrict the river's course. This has kept sediment deposits within the main canal, perching the river some four meters above the surrounding land. It was a disaster waiting to happen. Indiscriminate embankment building could never hold back the Kosi's sediment. The river flow at the time of last month's breach was not even high. Rather, it was lower than the minimum average flow for August.

...an Indian scholar writing in Bombay's Economic and Political Weekly, estimated that as much as 60 per cent of the 2.5–3 billion rupees spent annually by the Bihar government on construction and repair works was pocketed by politicians, contractors and engineers. It is said there is a perfect system of percentages in which a share exists for everyone who matters, from the minister to the junior engineer. The actual expenditure never exceeds 30 per cent of the budgeted cost. Contractor's bills are paid without being verified — many of the desiltation and maintenance works allegedly completed are never done at all, and yet payments are made.

Posted by Chandan Sapkota at 4:07 AM No comments: