Industrial Promotion Board (IBP) has approaved investment worth NRs26 billion (NRs20.5 billion as FDI) in cement, hotel and hydropower sectors. Most are for increasing paid-up capital.
The IPB allowed Dolma Impact Fund (Mauritius) to purchase 320,000 units of shares of Swet Ganga Hydropower and Construction Pvt Ltd at a price of Rs 100 per unit (total NRs320 million).

Investment Board Nepal (IBN) and Ministry of Industry (MOI) are organizing a two-day investment summit (March 2-3) to showcase and promote investment potential in Nepal, particularly in infrastructure, mining, tourism and agriculture. Nepal's Prime Minister Pushpa Kamal Dahal is set to inaugurate the summit, which will draw about 300 foreign delegates from around 25 countries. Indian Finance Minister Arun Jaitley and president of Asian Infrastructure Investment Bank (AIIB) Jin Liqun are also attending the summit. The last time such a summit was organized was in the early 1990s. 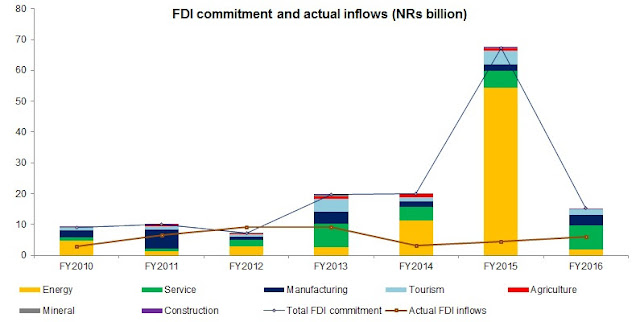 According to the latest data released by the government, India's GDP growth slowed only marginally to 7% y-o-y in Q3, October-December (the time when the government withdrew high-value currency notes from circulation), from 7.4% in Q2 (July-September). In Q1, it grew by 7.1% (y-o-y). Private consumption, fixed investment and industrial output growth all accelerated in Q4, with only the services sector witnessing a slowdown. The second advance estimate of growth in FY2016/17 is 7.1%.

There is some controversy over the accuracy of the data (private consumption rose by 10.1% over the quarter; credit by banks fell to the lowest level in a decade but investment grew), but FM Jaitley argued that it was due to high manufacturing (8.3%). The index of manufacturing production decreased by 2% in December. Also, inflation fell as demonetization dampened demand.
Posted by Chandan Sapkota at 10:30 AM No comments: