Europe Sneezes, India Catches a Cold (Europe was the target for 18 percent of India’s exports, compared with 10 percent headed for the US. Collapse of the euro could instigate a host of protectionist measures that would disrupt global trade.)

In the 3 years before the 2008 Financial Crisis, GDP growth in sub Saharan Africa (averaged over individual economies) was around 6%, or 2 percentage points above mean growth rates for the preceding 10 years. This period also coincided with significant Chinese FDI flows into these countries, accounting for up to 10% of total inward FDI flows for certain countries in these years. [...]Our individual results vary by year and country, but there are several year/country combinations where Chinese FDI contributed to an additional one half of a percentage point or above to GDP growth. These results suggest that a significant, even if in some cases small, portion of the elevated growth in sub Saharan Africa in the three years before the Financial Crisis and also in the two years afterwards (2008-2009) can be attributed to Chinese inward investment.

Unconditional Convergence by Dani Rodrik (Here is another one by Rodrik)

Unlike economies as a whole, manufacturing industries exhibit unconditional convergence in labor productivity. The paper documents this finding for 4-digit manufacturing sectors for a large group of developed and developing countries over the period since 1990. The coefficient of unconditional convergence is estimated quite precisely and is large, at 3.0-5.6 percent per year depending on the estimation horizon. The result is robust to a large number of specification tests, and statistically highly significant. Because of data coverage, these findings should be as viewed as applying to the organized, formal parts of manufacturing.

On aid and growth: Reflections ahead of Busan (The links below show that aid has positive impact on growth. Beware of the fact that there are studies that also show aid does not buy growth. Meanwhile, Raghuram Rajan and Arvind Subramanian argue that aid inflows have systematic adverse effects on a country's competitiveness, as reflected in a decline in the share of labor intensive and tradable industries in the manufacturing sector, but private-to-private flows like remittances do not seem to create these adverse effects.They argue that these effects stem from the real exchange rate overvaluation caused by aid inflows.)

Even though Nepal´s performance improved on human development, the country ranked 157th out of 187 countries in Global Human Development Index (HDI), down from last year´s ranking at 138th position.

The drop in position, however, was recorded not because Nepal performed badly on income, education and health -- three key areas that Human Development Repot (HDR) focuses on, but because this year´s ranking was done after adjusting inequality in all those areas, according to officials.

Justin Lin explains Development Thinking 3.0 (Here is a link to the full paper on Lin’s rejoinder to Kruger, Stiglitz, and Rodrik’s comment on his paper on New Structural Economics.)

Posted by Chandan Sapkota at 8:52 PM No comments:

Sources of electricity in Asia 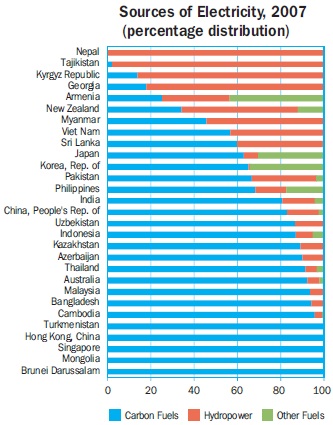 Mountainous countries generally depend on hydropower to generate electricity. Fast growing economies depend more on fossil fuels to generate most of their electricity. Nepal derives all of its electricity from hydropower. The figure in the left is adapted from this ADB 2010 report (p.38). Burenei Darussalam depends entirely on carbon fuels. Check out the Asian countries’ dependence on carbon fuels, hydropower, and other fuels for their power needs.

The curious case of Nepali electricity supply is noteworthy here. Despite having one of the highest hydropower potentials, Nepal is facing acute shortage of electricity. Load-shedding is a normal phenomena year round (blackouts could be as long as 18 hours a day during dry season). There is huge demand for electricity in the market—meaning high returns to investment, albeit with high gestation period—but still supply cannot remotely match up the demand.