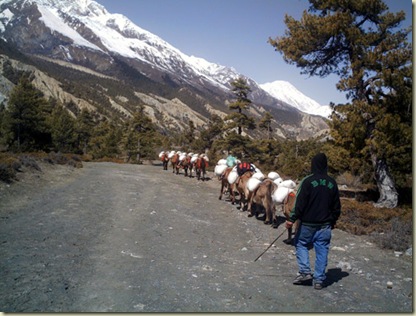 In this recent photo mules are driven along a mountain road in Manang district to market against the backdrop of the Annapurna himal. Traditional methods are still used to transport livestock in the region due to lack of motorable roads. (Source: Ekantipur)

Okay, this reminds me of the earlier blog post on trade and the article by Tyler Cowen in the NYT. I know the theoretical stuff in international trade but still I feel something else is missing. So, I want to know how freer trade would help lower food prices for these folks living up in the mountains. Probably, the domestic/local food prices is lower than in the big cities because major foodstuff (except rice) are grown and sold locally. Surplus is taken to nearby market or stored for next season plantation or as buffer against climatic uncertainties.

Varieties of foodstuff not produced locally and are imported to the village from nearby cities cost extremely high. Why? Because transportation cost is much more higher, usually adds up 30% more to the original price of foodstuff. I know the trade theories but still can't figure out where these folks stand out in terms of gains from trade. I feel they are always in the losing side...Are we thinking of the end before giving due attention to intermediate stuff...I mean is it not technically wrong/unwise/unsound to put too much emphasis on trade before giving due attention to the factors that are needed to realize the gains from trade (I am referring to roads, markets, credit, social insurance, governance, etc.)?

Posted by Chandan Sapkota at 10:23 AM No comments:

A new paper (Reform Teams) from the Commission on Growth and Development explores how keeping an arm's length relation with the private sector, through careful planning by reform teams/experts, helped Botswana, Japan, Taiwan, Cape Verde, Mauritius, and Malaysia attain astounding growth rates and reduction in poverty levels. It explains the virtues of experts/reform teams led growth and how they can help developing countries grow and reduce poverty levels. Before enjoying the juicy explanation in the paper, we need to be clear that the countries that are chosen as success examples in this paper carried out the reforms well before the WTO regime's harsh conditions on SEZs and import-substitutions policies were in place, which essentially allowed them to engage in export-led growth strongly supported by the state. This is exactly the theme of earlier paper written by Nobel laureate Michael Spence and Mohamed A. El-Erian. Almost all the stuff that is coming out of the CGD recommends countries to learn from the experiences of China and India. See this discussion as well.

...How did these reformers organize themselves at the beginning of their development journey? A recent study examined that question by focusing on five cases—Botswana, Cape Verde, Malaysia, Mauritius, and Taiwan (China)—chosen because of their varied cultural and administrative heritages (ranging from strong autocratic governments to weak multiparty coalitions). These economies achieved remarkable performance despite dire starting conditions. Botswana was the poorest country in the world in 1966, with only 22 university graduates and 12 kilometers of paved roads. Mauritius had an economy that depended almost exclusively on sugar and was prone to violence in the decade before independence in 1968. Cape Verde had virtually no private sector and among the world’s worst human development indicators in 1975.

...Malaysia’s team was its Economic Planning Unit, which reported directly to the prime minister. The unit started in the early 1960s with 15 staff, half of whom were expatriates. Cape Verde relied on three returnee advisers around the prime minister (who was also the minister of planning and development assistance) in 1975. Botswana also had an Economic Planning Unit, which started in 1965 with two economists and soon became the core of the powerful Ministry of Finance and Development Planning. Taiwan (China) had the Council for U.S. Aid (created in 1948), which reported directly to the president and combined some of the economy’s best engineering minds with top-notch U.S. economists.

Other star performers followed a similar approach—with Singapore relying on its Economic Development Board, Chile on its “Chicago boys,” the Republic of Korea on its Economic Planning Board, and Japan on its Ministry of Trade and Industry.

...The reform teams identified key constraints and success factors by industry, such as ensuring good governance in mining and developing best practice export processing zones for light manufacturing and information and communication technology. They also adapted the strategies to changing conditions (such as rising labor costs) and terminated bad experiments (Taiwan, China, is one of the few economies ever to abandon an ailing automotive assembly industry).

Posted by Chandan Sapkota at 9:28 AM No comments:

Professor Tyler Cowen argues that empty rice bowls can be filled if there is more freer trade in foodstuffs (only about 5-7% of total rice production is traded across borders). He thinks that in the long-run restrictions on food exports is going be counterproductive.

..Restrictions on the rice trade run the risk of making shortages and high prices permanent. Export restrictions treat rice trade and production as a zero- or negative-sum game where one country’s gain comes at the expense of another. That’s hardly the best way to move forward in a rapidly growing world economy.

This lack of support for trade reflects a broader and disturbing trend. An increasing percentage of the world’s production, including that for agriculture, comes from poor countries. Over all, that’s good for rich countries, which can focus on creating other goods and services, and for the poor countries, which are producing more wealth. But it can slow the speed of adjustment to changing global conditions.

...Many poor countries, including some in Africa, could be growing much more rice than they do now. The major culprits include corruption in the rice supply chain, poorly conceived irrigation systems, terrible or even nonexistent roads, insecure property rights, ill-considered land reforms, and price controls on rice.

...The sadder truth is that when it comes to food production — arguably the most important of all human activities — Mr. Friedman’s free-trade ideas still haven’t seen the light of day.

Okay, honestly this is yet another attempt to fully justify the virtues of free markets and free trade. Cowen explains basic economics about trade and relates it with the stuff going on in the Philippines and other countries. However, he stretches this analysis too far by bringing Friedman into his explanation. We know that free trade and all the efficiency and productivity arguments related to it are possible only when there are no distortions or inefficiencies in other complementary factors. For instance, how would Nepal and Burkina Faso benefit from freer trade in rice if the transportation cost is at least 30% over the price of foodstuff. Moreover, if there is freer trade (which is unlikely without revision of the Doha Round given the economic and political constraints...though I root for more open markets but with some caution), then major rice producers like India, Vietnam, and Egypt, among others would be the only producers in the long run because it would 'creatively destruct' meager rice production in, say, Nepal and Burkina Faso (I am not sure whether there will be creative creation of new rice producers because those who can have been producing since decades). The relatively cheaper (if any) rice from major producers (remember economies of scale, mass production, and cheaper price leading to existence of few big companies in the market...and who knows they might jack up prices again) would take over markets all over the world. This is fine but what if some emergency happens or a major policy shift occurs, which would disrupt the supply chain. Well, people from net importers would again have empty bowls!

Anyway, the dictates of Friedman would not work precisely because there is "corruption in the rice supply chain, poorly conceived irrigation systems, terrible or even nonexistent roads, insecure property rights, ill-considered land reforms, and price controls on rice." Tyler admits the existence of these inconsistencies (which are going to stay with us because of greedy and self-interested nature of human beings) but still repents that "Mr. Friedman’s free-trade ideas still haven’t seen the light of day.". I sense some contradictions! Also, the incentives thing Cowen talks about is pretty hard to come by. How would farmers up in the mountains in Bhutan, Nepal, India or farmers in Sub-Saharan Africa get incentives to grow more rice, even in the face of higher prices in the international market, if they do not have control over land, lack credit to buy seeds and fertilizers, bear higher transportation cost, and, most importantly, are very unsure about climatic factors. There are so much lags in information dissemination, procurement of seeds, harvesting, and accessing the markets.

Farming in the emerging markets (and developing countries) is riddled with market failures and does not react to price signals as other businesses do. This sector is sticker than any other sector (a 10% increase in prices leads to a 1% increase in output), and there are numerous bottlenecks, such as lack of access to finance- the main reason why Kenyan and Ethiopian farmers planted less this year. Even if there is substantial move towards free trade (hopefully, under a revised Doha Round), bottlenecks and market failures would decrease the pace of transition to a new equilibrium. The adjustment process Cowen talks would be very slow and might in fact make some countries much more worse off.

Meanwhile, Rodrik disagrees with Cowen's assertion that freer trade would boost global supplies and lower prices. He uses similar basic economics arguments to assert that the net effect would depend on whether a country is net importer or net exporter of food in the international market. If a country is a net importer, then it would see lower prices. However, if a country is net exporter, then its domestic market would see higher prices relative to other products. Relative to the international market prices, domestic prices would be lower but when there is higher demand, it also pushes domestic prices up, which might still be cheaper to customers from other countries. See more here

Trade works by relieving the relative scarcity of goods.  The key here is the term "relative."  Food importing countries are food scarce countries, and as they open up to trade, the relative price of food falls.  But if you are Thailand or Argentina, where other goods are scarce relative to food, freer trade means higher relative prices of food, not lower.  And all the induced efficiency benefits and short- vs. long-run effects that Cowen talks about have no bearing on this conclusion: in the end some countries have to be net importers, and others net exporters.

Posted by Chandan Sapkota at 12:49 AM No comments: