This op-ed is the same as the blog post published earlier.

In the last day of his role as prime minister, the Maoist premier Pushpa Kamal Dahal claimed that his administration gave “utmost importance to economic transformation” and made “major contribution to economic revolution”. Unlike his boss, former Finance Minister Dr. Baburam Bhattarai was a bit modest in laying claims about economic progress achieved under his leadership. In assessing the economic policies and progress under the Maoist administration, it is unclear how the dismal performance, especially in encouraging private sector and utilizing development expenditures, amounts to or leads to “economic revolution”.

The economy is far from being transformed. There were some successes in revenue collection and welfare programs. However, there were even more problems-- industrial relations deteriorated, allocated development money remained unspent, investors and donors remained skeptical of Maoists policies, price level spiraled upwards, and there was a severe shortage of energy, which further crippled the industrial sector, among others. 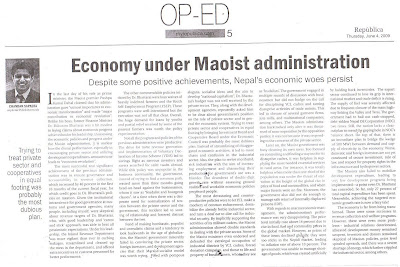 Unfortunately and mistakenly, I emailed the same article to two (rival) dailies in Nepal. I have no desire to publish the same op-ed in two dailies (Republica and The Kathmandu Post) on the same day. I bear responsibility for the confusion (and tension) it created there! This should not have happened.

Posted by Chandan Sapkota at 8:26 PM No comments: