In South Asia, GHI 2012 ranks Sri Lanka 37, Pakistan 57, Nepal 60, India 65 and Bangladesh 68. It means that hunger in Sri Lanka is the lowest in South Asia. Hunger level in Sri Lanka and Pakistan is "serious". In all other countries, it is "alarming".


The GHI ranks countries on a 100-point scale in which zero is the best score (no hunger) and 100 the worst. This year's GHI reflects data from 2005 to 2010. Hunger level is categorized as follows:
In order to identify hunger levels and hot spots, the GHI scores countries based on three equally weighted indicators: the proportion of people who are undernourished, the proportion of children under five who are underweight, and the child mortality rate.

South Asia reduced its GHI score by more than 6 points between 1990 and 1996—mainly through a large 15-percentage-point decline in underweight in children—but this rapid progress could not be maintained. Stagnation followed, and the region has lowered its GHI score by only about 2 points since 2001 despite strong economic growth. The proportion of undernourished people did not decline between 1995–97 and 2006–08 and even showed a transient increase of about 2 percentage points around 2000–02. Social inequality and the low nutritional, educational, and social status of women are major causes of child undernutrition in this region and have impeded improvements in the GHI score.

The rising water, land and energy scarcity will impact food security in the coming decades (especially food price volatility and food price spikes). On this regard, the GHI provides the following recommendations to effectively deal with its impact on food security: 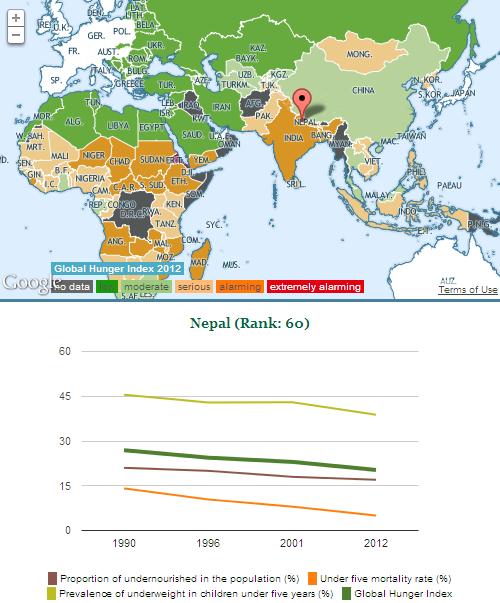 Posted by Chandan Sapkota at 2:35 PM No comments: