Ever wondered the share of Kathmandu valley (Kathmandu, Lalitpur and Bhaktapur) in the national economy? Well, it contributed between 23.4 percent and 31 percent (based on “reference scenario” and “alternative scenario” respectively) to national economy [that is, C+I+G+(X-M)] in 2010/11, according to this study by the central bank.

Since the total population of Kathmandu valley is 2.51 million (Census 2011 preliminary data or 4 million as assumed in the study considering temporary population as well), it means that a region with 9.44 percent (or 15 percent if temporary population is considered) of total population and less than one percent of total area contributes almost one-third of the total economic activities (considering alternative scenario). Reference scenario is based on published data sources (mainly NLSS III—and other surveys like CME 2006/07 and SSME 2008/09—for private consumption expenditure and investment, MoF data for government expenditure and investment, and customs data as well as field survey for trade) and field survey. Alternative scenario is based on reference scenario plus underestimated data (consumption of electricity and petroleum products) obtained from field survey. 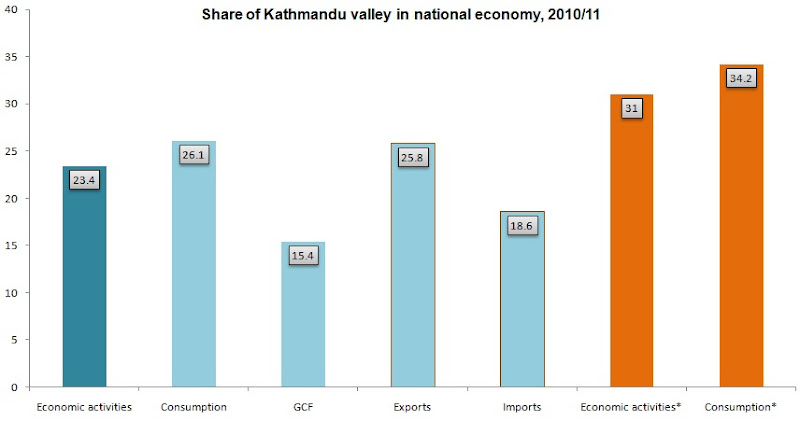 Furthermore, considering alternative scenario, the share of Kathmandu valley in consumption of food, electricity and petroleum products is 19.8 percent, 29.2 percent and 30.7 percent respectively. Meanwhile, the share in consumption of LPG, petrol, diesel and kerosene is 60 percent, 46 percent, 16 percent and 38 percent respectively. With the huge share of consumption in the richest region that also has bureaucratic centers and most jobs, it is no surprise that there is some form of elite capture of subsidies meant for the poor in particular and for all in general. Sounds like an extremely off-target subsidy of all.

Posted by Chandan Sapkota at 9:18 AM No comments: