Food Insecurity: Can Trade Address It?

Food insecurity is a major national as well as regional issue in South Asia. Most of the countries in the region are reeling under high food prices, which are pushing up overall inflation, and deficit food production. Food-price inflation is having a negative impact on poverty reduction[1], progress in achieving the Millennium Development Goals (MDGs), and overall macroeconomic balance. Given this mounting problem closely linked to the livelihood and survival of mil- lions of people in the region that has the largest number of poor people in the world, ensuring food security is a pressing concern.

Solving the problem of food insecurity has become even more imperative in South Asia because the region’s total population is expected to be 2.3 billion in 2050 (up from 1.6 billion in 2011), but the area would remain the same (4.8 million sq.km).[2] This is equivalent to about one–fourth of the total projected world population in 2050. Furthermore, by 2050, South Asia will have the highest population density (486.8 persons per sq. km) of all the regions in the world. Increasing agriculture productivity and smoothening supply within and across borders are vital to ensuring food security for such a large population.

While there are many factors that are causing food prices to rise at the national, regional and global levels, one of the ways to mitigate the impact—with regard to access, availability and price volatility—is to facilitate agriculture trade by removing trade restrictions and by enhancing cooperation on smoothening the flow of agriculture goods from surplus to food deficit nations. It should, however, be realized that achieving food security is a multidimensional task that involves international trade as well as, inter alia, new technology and input availability, environmentally sustainable farming and appropriate supply management practices.[3]

As a share of the country’s total agriculture trade with the world, Bhutan mostly exports to and imports from South Asia. The figures are also high for Afghanistan and Nepal. The other countries trade less with South Asian neighbours relative to their total trade with the world (Table 2). While Afghanistan trades mostly with Pakistan, Bhutan and Nepal trade mostly with India. The low share of intra-regional agriculture trade for other countries suggests that either there is low complementarity in agriculture trade within the region or the market structure with regard to price, quality and volume is unattractive.

Overall, India and Sri Lanka have trade surplus in agriculture goods. Bhutan had surplus in 2008, but a deficit of about US$5 million the following year. While agriculture trade deficit of Afghanistan, Bangladesh, the Maldives and Nepal is increasing, Pakistan saw a decrease in deficit in 2009 when compared to the previous year (Table 3).

Food prices have been surging in all South Asian countries since 2007, not only impacting macroeconomic stability, but also pushing millions of people below the poverty line. Food prices have been rapidly increasing in most of the countries following a convergence in their growth rate in 2003 (Figure 1). In the recent period, food price inflation in Pakistan, followed by Nepal, is the highest in South Asia. Apart from adversely affecting poverty reduction efforts in the region, rising food prices also slow down the progress being made in achieving the MDGs. 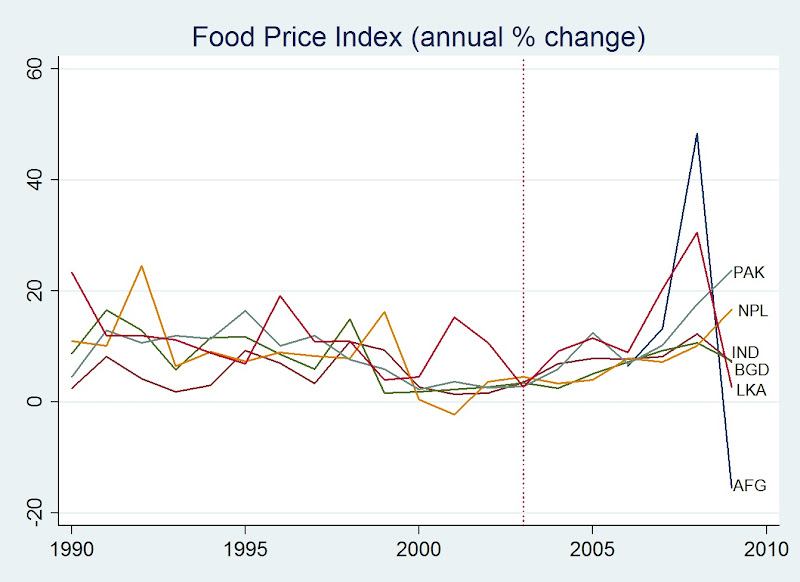 It is estimated that a 10 percentage increase in food prices will increase the number of poor people (millions) living below US$1.25-a-day by 3.8, 0.01, 22.8, 6.7, 0.6, 3.5, and 0.2 in Bangladesh, Bhutan, rural India, urban India, Nepal, Pakistan, and Sri Lanka, respectively.[6] The impact of higher food prices is severe because South Asian people, on average, spend more than half of their income on food consumption. Higher prices/price instability without a corresponding purchasing power, reduce savings and increase vulnerability. It is estimated that an average person in Bangladesh, Nepal, Pakistan and Sri Lanka spends, respectively, 56.05 percent, 57.88 per- cent, 46.99 percent and 63.55 percent of his/her total expenditure on food.[7] With total South Asian population projected to reach 1.9 billion in 2025 and 2.3 billion in 2050, food insecurity will intensify if agriculture production does not keep pace with population growth.

Food insecurity and price instability affect hunger and malnutrition. Though the state of hunger in South Asia has improved when compared to the level in 1990, it is still high. According to Global Hunger Index 2010[8], the hunger situation in Bangladesh and India has improved from “extremely alarming” to “alarming”, and in Pakistan and Sri Lanka from “alarming” to “serious”. The state of hunger in Nepal, however, has remained the same: “alarming”. Overall, hunger in South Asia is “alarming” and worse than in Sub-Saharan Africa.

Undernourishment is also a major concern in the region. Almost 26 percent of the population in Bangladesh is undernourished. The figures (percentage of the population that is undernourished) for India, Nepal, Pakistan and Sri Lanka are 22, 16, 23, and 21 respectively. Similarly, a large proportion of children under five years are underweight. It is as high as 43.5 percent in India and as low as 21.1 percent in Sri Lanka. Ensuring reliable, adequate and nutritious food items is essential to address malnutrition in the region. Hunger and undernourishment have long-term economic implications as they reduce people’s capacity to work efficiently and fight against diseases by undermining the immune system.

Realizing the urgency to address food insecurity through regional cooperation after the food crisis of 2007–2008, South Asian leaders, during the 15th Summit of the South Asian Association of Regional Cooperation (SAARC) held in Colombo, agreed to expedite the operationlization of the SAARC Food Bank, which is expected to serve as a regional food security reserve for SAARC member countries during normal food shortages and emergencies. The Food Bank’s reserve of food grains has been raised from 241,580 metric tons (MT) to 486,000 MT. But the SAARC Food Bank is yet to become fully functional. If properly designed and implemented, it could help relieve pressure on some countries facing urgent food shortages.

Increased agriculture productivity and production is crucial to having enough stock for trade in the region. Agriculture production has been consistently increasing in all countries but arable land has remained the same. This means that productivity has risen, and needs to rise further to feed an increasing population. For instance, the Maldives has one of the highest cereal yields but the lowest arable land in South Asia (Table 4). Since its population is expected to increase by over 13 percent between 2011 and 2050 and rising sea level is expected to inundate large swathes of its land, it will find difficult to ensure food security, let alone generate surplus production for trade. In such circumstances, exports from countries such as India and Pakistan that have a relatively high level of production and area of arable land become crucial.

India produces the lion’s share of the total South Asian food production. In 2009, it produced 748.84 million of food, three times higher than the total production by other South Asian countries combined (Figure 2). 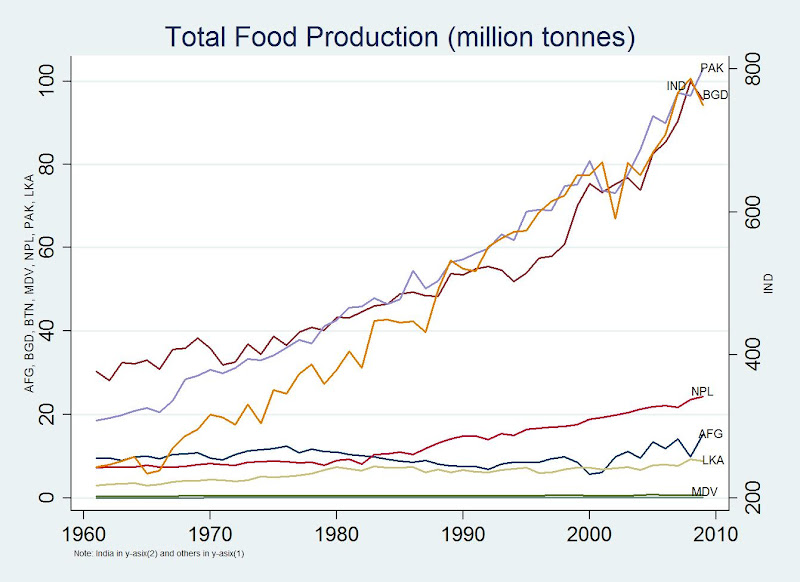 * India on right y-axis and others on left y-axis

That said, since arable land is expected to be the same (or decline in the worst case scenario), it is imperative to increase agriculture yield by adopting new technologies and novel farming techniques, and using improved quality seeds.

India is the world’s second biggest producer of wheat, sugar and rice and has a sizable surplus, which is beyond the limit set by the government, in domestic stock. Currently, the Indian government is ready to export surplus food grains, especially when grain prices are record high, but is waiting to assess the total domestic demand that will be mandated by the upcoming Food Bill.[9] After the food crisis of 2007–2008, India had restricted exports of major food items. It is yet to relax those restrictions.

While it is politically justified to restrict exports when there is domestic production deficit, following the same policy even when there is surplus is not a smart move and represents a wasted opportunity for alleviating regional food insecurity. It is estimated that restrictions on rice exports explained almost 40 percent of the increase in global rice price in 2007–2008.[10]

The Food and Agriculture Organization of the United Nations argues that agriculture trade liberalization acts as a catalyst for change and promotes conditions in which the food-insecure are able to raise their income, live healthier and be more productive. But not all will gain from liberalization. Those that are hurt and are increasingly vulnerable have to be taken care of by implementing appropriate safety net programmes such as food-for-work, school feeding and in-cash or in-kind transfers. For instance, Bangladesh extended its work-for-food programme in response to damages caused by natural disasters and rise in food prices.[11]

Food security is a multidimensional issue and agriculture trade is one tool to address food shortages. Though intra-regional trade in agriculture goods is higher, in relative terms, than total intra-regional merchandise trade in South Asia, a host of barriers constrain such trade.

Some countries have not relaxed exports restrictions despite having a surplus of food grains. Furthermore, most countries are imposing high tariff, para-tariff and non-tariff barriers in agriculture trade.[12] Most countries protect most agriculture goods under the Agreement on South Asian Free Trade Area (SAFTA) by putting them on their sensitive lists. Tariffs on goods on the sensitive lists do not have to be cut as per SAFTA’s Tariff Liberalization Programme. The most-favoured-nation (MFN) applied tariff on agriculture goods in South Asia is higher than in some other regions. It was 29 percent during 2006–2009, com- pared to just 9.93 percent in ASEAN. High trade barriers—both export restrictions and import barriers—are complicating efforts to mitigate food insecurity in the region.

Theoretically, agriculture trade liberalization leads to, inter alia, a reduction in the price of agriculture imports in the importing country and helps increase agriculture output by providing attractive price signals to farmers in the exporting country. However, as noted above, not all will be winners from liberalization. The losers will have to be taken care of by implementing appropriate social safety net programmes.

Increasing production and productivity is key to addressing the availability of adequate food. Without surplus production and trade complementarity, it is hard to increase agriculture trade aimed at addressing food insecurity. Countries like India that have surplus food stocks should take the initiative to relax export restrictions at least in the region. Meanwhile, all countries should prioritize agriculture and focus on increasing production and productivity. Inadequate investment in agriculture, irrigation, rural infrastructure, technology, better storage and packaging facilities at the farm level, and marketing process, poor trade facilitation, and restrictions on access to ports and/or inter-country roads usage, among others, are the major hurdles that need to be addressed to increase agriculture trade and to ensure food security.[13] This should be supplemented by reducing, to the most reasonable extent, all forms of trade restrictions that hamper the free flow of agriculture goods in the region.

Creating a policy environment where farmers are incentivized to be more productive and engaged in agriculture activities is also crucial for food security. For this, policies should be designed in such a way that farmers are encouraged to cooperate so that there are economies of scale even when there is fragmented small-scale land holdings. Furthermore, food price stability is also an important aspect that needs to be adequately addressed to ensure food security in the region. Agriculture sector firms should be given enough incentives to produce goods that are vital to maintaining food security. Importantly, these policies have to consider the impact of climate change on agriculture production and trade as well. All of these will require greater regional coordination to reduce food security and trade policy inconsistencies.