What’s holding back growth in Nepal?

My latest column is related to the growth diagnostics paper I wrote for honors thesis in economics. I argue that bad infrastructure is the most binding constraint on economic activity in Nepal. I will post the full diagnostics paper in a series of blog posts later. So far these are the discussion on some of the constraints.

Almost all the medium- and long-term development strategy papers floated so far specified economic growth as the most important objective in the economy. The finance ministers presented fiscal budgets accordingly and promised to devote resources based on his administration’s economic philosophy. For instance, last year the finance minister presented the fiscal budget with a goal to attain double-digit growth rate in three years, something that is hard to attain given labor and energy problems and the fact that even during the heydays of liberalization the economy did not witness a double-digit growth rate. What is ironic is that almost all the finance ministers trumpeted high economic growth rate as the main objective without first diagnosing what is actually holding back growth, i.e. the set of binding constraints on economic activity.

Nepal has few resources but numerous economic and political problems. Hence, trying to solve all the problems using limited stock of resources might not produce the best synergistic effect. For instance, the spray-gun approach tried in the past did not produce growth rate as expected by the policymakers. A smarter strategy would have been to devote a proportionally high amount of resources in relaxing the binding constraints, which could have led to a large positive effect on growth rate.

The main issue here is to identify the most binding constraints on economic activity and to design a set of policies that, once targeted on these constraints at any given point of time, would produce the biggest bang for the reform buck. This would not only help construct a hierarchy of the strongest constraints, but also identify the most binding one so that economic policies designed to relax it would produce a favorable change in growth rate. Following this line of policy-oriented approach, a growth diagnostics of the Nepali economy (done by this author in collaboration with Prof. Sinan Koont, Dickinson College, PA) shows that bad infrastructure is the most binding constraint on economic activity.

That being said, it does not mean that other constraints like human resources, macroeconomic stability (financial, monetary and fiscal), microeconomic risks (property rights, corruption and taxes), coordination failures and information externalities (self-discovery) in the market, low savings, and poor intermediation are of no importance. What it really means is that these constraints are not as strong as bad infrastructure is, if our objective is to bring the largest change in growth rate in the short term, i.e. improvement in the supply of infrastructure (relaxing the binding constraint) would produce the largest positive change than relaxation of other constraints. 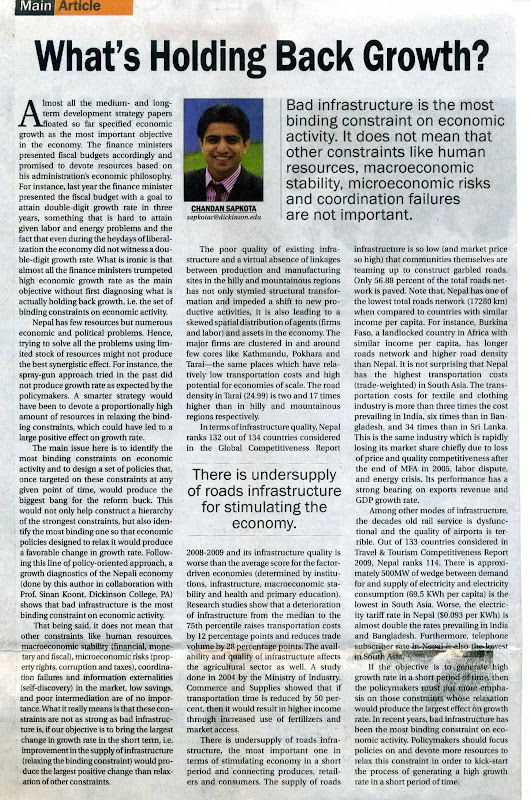 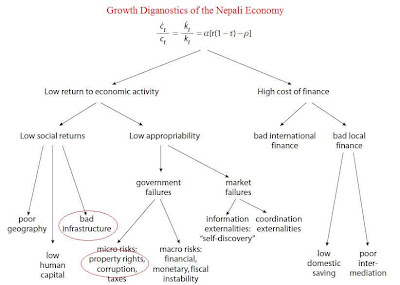 Posted by Chandan Sapkota at 11:27 PM No comments: