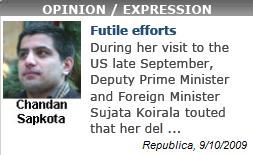 In my latest op-ed, I argue that exclusively chasing for duty-free access for Nepali garment and textile exports to the US markets is not a panacea for the problem associated with this dying industry. I think nothing is going to move forward even if Nepali exporters gets preferential treatment in the US market because after the end of MFA in 2005, the market is already flooded with similar exports from other countries that enjoy economies of scale in production and are more efficient and competitive (price and quality) than Nepali exporters. Last year, I wrote an op-ed (Times up for garment industry) arguing why the garment and textile industry cannot be depended upon for export-led growth.

During her visit to the US late September, Deputy Prime Minister and Foreign Minister Sujata Koirala touted that her delegation lobbied hard with some US Congressmen to pass a bill that would treat Nepali garment and textile sector preferably in the US market. She boasted that there were “positive and promising” responses from the US regarding duty-free access, which could, in principle, resuscitate the dying export-based garment and textile industry.

Each time a high-level delegation visits the US, they implore for preferential treatment of Nepali garment and textile industries. This fruitless effort has been continuing since the end of Multi-Fiber Agreement (MFA)—which established a system of quotas to limit the quantity of imported textiles and apparel products from specific countries to the US, Canada, and the EU — in 2005, after which the Nepali garment and textile industry has seen drastic decline in exports and market share in the West.

The value of garment exports between January-April 2009 was less than 10 percent of what was exported in the same period in 2004. This sector has already shed over 90 percent of jobs and 98 percent of firms. In the first five months of 2009, the value of readymade garment exports was US$3.4 million, a 49 percent drop from the same period last year. Recall that the garment sector was once the highest foreign currency exchange earning sector. Now, its contribution is minimal and agricultural goods like pulses have more weight on the export basket.

In a way, the political and financial resources invested so far in securing preferential access to the US market sounds reasonable. However, after more than four years of lobbying, there is hardly any progress. The policymakers are bogged down into this issue as if this is the only sector that would help stimulate export-led growth and employment generation. Exploration of other comparatively advantageous sectors have been overshadowed by the obsessive focus on securing preferential access to a market that is already flooded with similar goods from countries which enjoy huge cost and competitive advantage over Nepali exporters.

At this juncture, we need to ask two questions: What is the chance of getting preferential access to the US markets under present circumstance? If it does, will Nepali garment and textile exporters then be able to regain the lost market share?

The illusionary notion that securing duty-free access to the US market would revive the garment and textiles sector is fundamentally flawed. Policymakers and investors should be a bit more realistic about our real manufacturing and export capacities.

Unfortunately, there is no positive answer to these questions. A senior diplomat, who is quite familiar with these issues, from the State Department opined that it is very “unlikely” that Nepal would get preferential access to the US market under the present circumstance. Unfortunate this might be but it is not surprising. By now the Nepali lobbying troupe has a fair idea of how hard it is to secure preferential treatment from the US Congress; despite over four years of lobbying, things have not moved a bit in the positive direction. It should have been a clear indication that the entire effort might be a lost cause, not because we don’t need to prop up this sector but because we can’t do it under present labor and economic conditions in particular and the incapacity to fulfill enhanced labor, quality and environmental requirements brought about by increasing globalization in general. The senior official advised Nepali leaders and lobbyists to be a bit more realistic and not chase for something that is not attainable. Now, revert back to what DPM Koirala touted while she was in DC in September? It seems like she has not fully fathomed this issue.

Now, let us assume that Nepali garment and textile exporters get preferential access to the US market. Will this help revive the lost glory of this industry? It seems unlikely because of five reasons. First, due to persistent labor problems ranging from bitter disputes on minimum wage to hiring and firing provisions, the firms are simply unable to supply pre-ordered goods on time.

Second, investors are discouraged to invest in this sector due to unmanageable red tapes and irresolvable industrial relations. Third, the problem is further compounded by frequent bandas and transport strikes. The cumulative effect is that delivery is costly and not possible within the stipulated timeframe, leading to loss of valuable customers like WalMart and Gap Inc. This is more of supply than demand issue.

Fourth, exporters from China and India, among others, are more competitive in terms of price and quality than Nepali exporters. They enjoy economies of scale and their governments have elaborate plans to prop up production and distribution efficiently. This is clearly lacking in Nepal because of the lackluster response from government and myopic business vision of investors. Until 2005, the government and exporters basked on preferential treatment and completely disregarded the need to upgrade the old production structure into a new, consolidated one so that it can compete with more efficient exporters from abroad. Fifth, Nepal cannot jump successfully into the highly-competitive US market because exporters from other countries have already eaten up the pre-2005 market pie of Nepali exporters.

This does not mean that we need to abandon the promotion of garment and textile industry abroad. It would be fruitful to look at regional markets, which has higher potential than markets abroad because of lower transportation and transaction costs. This sector could gain more if the same amount of political and financial capital is invested in lobbying to eliminate countervailing duty (CVD) of 4 percent in the recently signed Nepal-India trade treaty.

Expediting establishment of GPZs and giving tax credits and subsidy incentives to investors would also aid the process, though, to be frank, no one knows how much this will help the dying sector regain its past glory. To satisfy the never-ending fascination with Western markets, the government and the exporters need to look into niche markets rather than the entire garment and textile market, which, as argued before, are already conquered by competitive firms from other countries. Promoting selected products that reflect Nepali tradition and heritage would be one of the potential niche markets.

The illusionary notion that securing duty-free access to the US market would revive the garment and textiles sector is fundamentally flawed. Policymakers and investors should be a bit more realistic about our real manufacturing and export capacities. A preferential treatment, which is very unlikely in the present context, will not be a panacea to the multiple, intricate problems of the garment and textiles sector.

Posted by Chandan Sapkota at 10:15 AM No comments: