On January 24, PM Deuba led caretaker cabinet took an ill-conceived decision to lower minimum age eligibility to receive elderly allowance to 65 years from the existing 70 years. Currently, the government provides NRs2000 per month to citizens who are 70 years and above. There is intense debate on sustainability of such handouts without generating additional resources at a time when tax revenue is barely sufficient to cover recurrent spending.

Here is how much it will cost to the treasury: the cabinet decision on Wednesday will cost an additional NRs16 billion each year in the next five years since it will have to include about 0.645 million new recipients in this ‘social security’ scheme. There are about 1.02 million people of 70 years and above age and they take around NRs25 billion. Cumulatively, old age allowance now amounts to about NRs40.7 billion (around 1.4% of GDP and 5.6% of revenue). 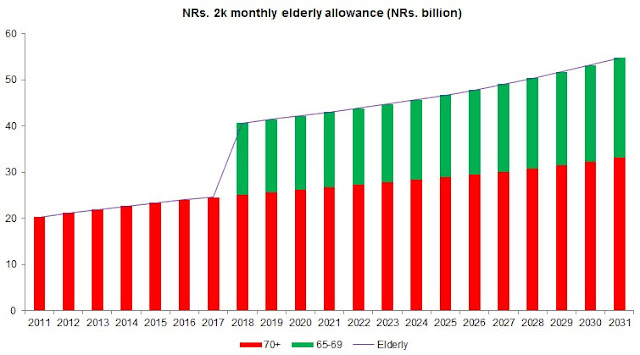 The cabinet also took a decision to increase housing grant to earthquake, fire and flood victims by NRs100,000 (making total NRs400,000). This alone would cost an additional NRs96 billion (767,705 eligible for earthquake related housing grant and 192,136 for flood related grant). In total, last Wednesday’s cabinet decision cost the economy an additional cost equivalent to about 3.8% of GDP. That’s insane.

Now, this is a bait for the upcoming left alliance led government. They committed to raise old age allowance to NRs5000 in their elections manifesto. If they keep their promise, then it would cost NRs101 billion (NRs63 billion for 70+ and NRs38 billion for 65-69 years old), which is equivalent to 3.4% of GDP. It will be very difficult for the next government to raise the eligible age for old age allowance back to 70 years and above. And they probably won’t do it because they love such handouts in the first place. Recall that it was Man Mohan Adhikari led government that decided to distribute NRs300 monthly as old age allowance in 1994. Later on it was increased to NRs1000 and then UML’s Bishnu Prasad Poudel, when he was finance minister in 2016, doubled it to NRs2000. This has been a good selling point to attract elderly votes. The NC led caretaker government probably have thought they can claim credit for lowering eligibility age for elderly allowance and for increased housing grant. They did this without considering if the next government will have enough resources to fulfill them. Furthermore, it restricts the next government’s flexibility with respect to realigning budget on their signature programs. In short, its fiscal irresponsibility and imprudence. 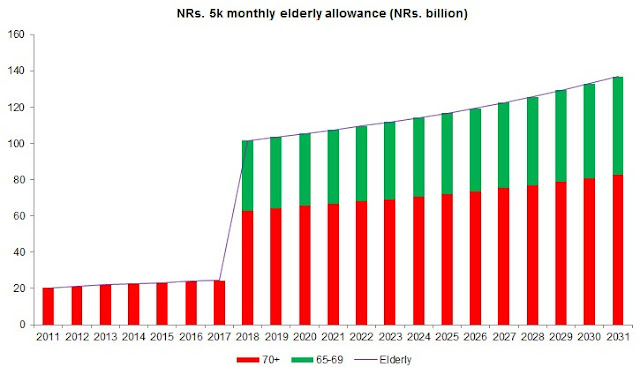