How close is Nepal to achieving the MDGs?

Since MDGs are coming to an end in 2015, global leaders, development agencies, CSOs and think-tanks are already talking about post-MDG framework and targets. One proposal is to adopt the Sustainable Development Goals (SDGs). In the last Rio+20 Summit, Nepal proposed focusing on food security and sustainable agriculture; water and sanitation; energy; sustainable cities; natural disaster; green job and social inclusion; and mountain ecosystem. As this discussion moves ahead and the global team of experts come up with some kind of quantifiable development targets for the post-MDG era, it is time to take a look at the achievements made thus far in achieving the MDGs.

Here, I am presenting a table showing the latest achievement and the target in 2015. The information is sourced from MDG Progress Report for Nepal 2010, Nepal Demographic Health Survey 2011, CBS and WB. Targets in parentheses are the revised ones as per Needs Assessment Report, Table 5.A.1. The table shows that Nepal is unlikely to achieve the target of reducing the proportion of employed people living on less than US$1.25 per day (PPP); increasing proportion of births attended by skilled birth attendant; and increasing proportion of population using an improved sanitation facility. All other targets are either achieve, likely to be achieved or potentially likely to be achieved. 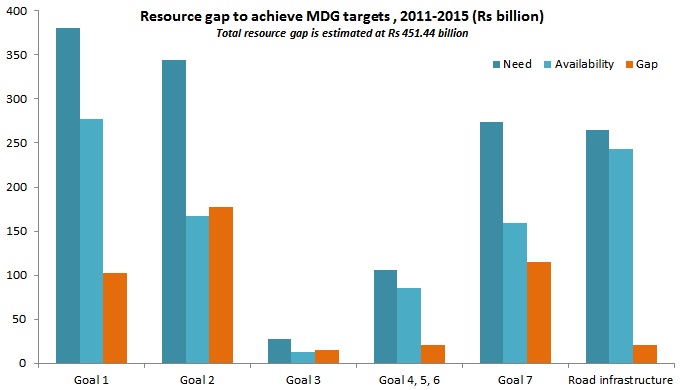 Of course, we need to be also aware of the fact that having the financial resources alone will not be sufficient to achieve the targets.

Posted by Chandan Sapkota at 11:20 PM No comments: