This is just a summary/note of the status of South Asian Free Trade Agreement (SAFTA). It is heavily extracted from Weerakon’s chapter in this book published by the WB. I will post updated analysis and figures later. It walks through the events leading to SAFTA (from the establishment of SAARC and the passage of SAPTA). The one thing that stands out is that the role of India in stimulating trade in the SAARC region.

Most of the SAARC nations heavily depend on the Indian market for trade. Meanwhile, in terms of trade volume, India trades the least with SAARC nations. So, SAARC nations need India to liberalize its trade regime further, not the other way round! It is time for other SAARC nations to reciprocate India. I still need to get hold of a good paper that weighs the gains and losses to each SAARC nation from SAFTA.

In 1977, Sri Lanka initiated the process of policy liberalization and other countries followed in the 1980s. A regional bloc named South Asian Association for Regional Cooperation (SAARC) was established in 1985.

India liberalized in early 1990s, leading to a wave of economic liberalization in South Asia. To be fair, without India’s initiation, no trade agreement under SAARC would be possible. SAARC countries rely heavily in the Indian market for both exports and imports. However, this is not the case with India, which trades more with ASEAN, the EU and the US.

A proposal to initiate SAPTA was agreed upon by SAARC members in December 1995. The next year, they agreed to start SAFTA by 2000 (but not later than 2005). With good progress in SAPTA by 1998, the SAARC nations proponed the initiation date of SAFTA to 2000.

Outstanding issues liked to rules of origin (ROO), sensitive lists and other concerns were sorted out in January 2006. Under the proposed Tariff Liberalization Program (TLP), SAFTA will become fully effective for LDCs (Nepal and Afghanistan) by 2016 and for non-LDCs by 2013.

There are legitimate concerns about the usefulness of SAFTA because of the number of goods in sensitive list, ROO conditions, and other preferential access through bilateral FTAs that will offer more generous tariff cuts and market access than SAFTA does. Moreover, there are arguments that regional integration would not be that effective because there is hardly any potential for comparative advantage-driven trade because most of the countries share similar socio-economic fundamentals such as low income, abundant labor, language in general, etc. Others echo the view that countries are better off if they liberalize trade unilaterally (this works only if India leads and it benefits other SAARC nations). Some (here and here) argue that regional trade integration will in fact yield a net welfare loss and slow unilateral liberalization. However, new studies have identified benefits not only in trade in goods but also in services and investment.

SAPTA did not move far enough because of various self-imposed trade constraints.The most limiting factor of SAPTA was the scope of goods protected under special lists. For instance, products imported from under SAPTA concessions translated to only 15 percent of total imports between SAARC nations. Intra-SAARC trade was just 5 percent of total trade with the rest of the world.

Meanwhile, SAFTA adopted a negative list and sensitive list rather than goods covered under preferential concessions. Under SAFTA, non-LDC members are required to reduce existing tariff to 20 percent within two years of implementation of the agreement. Then, in the next five years, they are required to reduce tariffs to a range of 0-5 percent. For LDCs, in the first two years, tariffs should come down to 30 percent and to 0-5 percent in the next eight years. The LDCs are in a better position in terms of reducing tariff. Note that the tariffs reduction under SAFTA still fall short of the concessions under some of the bilateral trade agreements among SAARC nations, mainly with India. 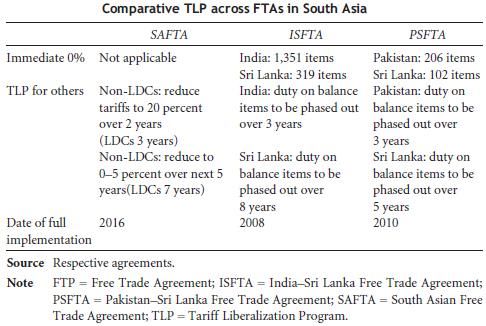 With regards to rules of origin (ROO)- which generally includes provisions to prevent trade deflection, facilitate value addition, and augment the volume of intraregional trade- SAFTA ROO is similar to that under the bilateral FTAs in the region. 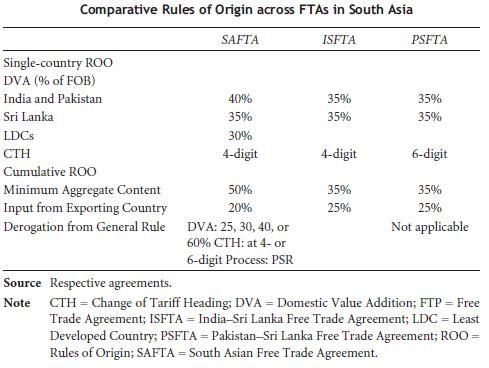 Regarding sensitive list, which is used to shield sensitive industries from increased competition, there are a lot of items that do not face competition, i.e. tariffs are not brought down. In general, countries retain a negative list of 20 percent of tariff lines for non-LDC nations. Nepal maintains the highest number of items under sensitive list. There is no formal and binding provision in the framework agreement requiring that negative lists are pruned down over time. This is in contrast to other FTAs, which require explicitly that negative lists be phased out with time. 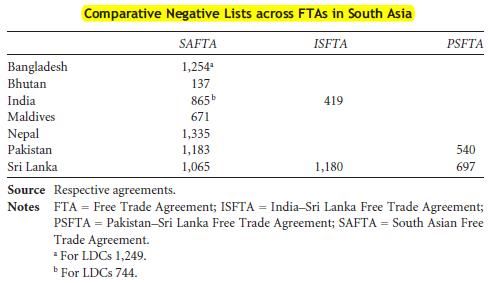 Almost 53 percent of total import trade among South Asian nations by value is excluded from the liberalization of tariffs proposed under the SAFTA treaty. India is taking an unilateral move to prune its sensitive list by removing an additional 264 items applicable to LDCs. There is also no explicit commitment to deal with nontariff barriers.

SAFTA is confined to trade in goods, leaving trade in services, investment and other areas of economic cooperation. Moreover, the required initial tariff liberalization of 20 percent threshold is not that encouraging because most of the nations have been unilaterally lowering Most Favored Nations (MFN) tariffs quite substantially over time.

More than 90 percent of regional trade for Nepal, Bangladesh, Sri Lanka is confined to a bilateral relationship with India. Basically, the process of creating SAFTA involves market access between India and other South Asian economies. India is the biggest consumer of other SAARC nations’ exports. If India gives generous concessions, then the trading partner benefits tremendously. For instance, Nepal and Sri Lanka benefit from trading with India. Nepal’s share of trade with India in total intra-SAARC trade is almost 100 percent, while in total world trade, Nepal’s trade with India is close to 70 percent. 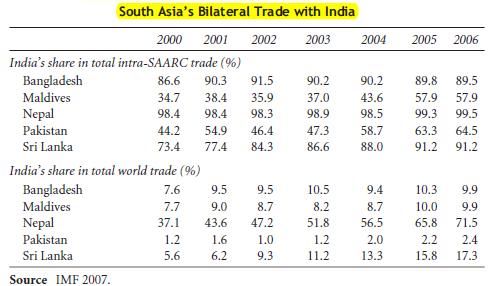 The SAARC nations need India to open up its markets and give more concessions, not the other way round. In fact, India’s share of imports from SAARC nations is close to one percent, which is less than its imports from ASEAN+3 nations (27 percent). 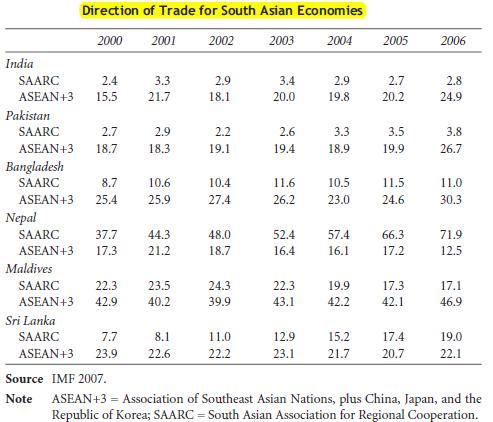 At present, most South Asian nations are restricting 55-65 percent of their imports from India under SAFTA sensitive lists.

Almost all the countries have signed either bilateral or regional (or both) trade agreements involving India. 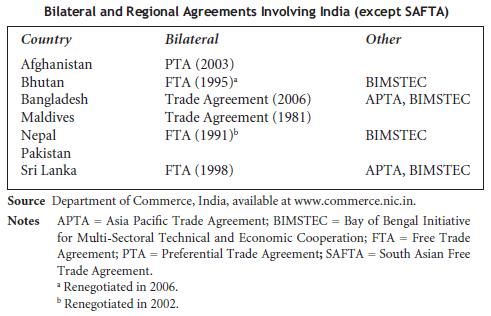 Posted by Chandan Sapkota at 12:49 PM No comments: